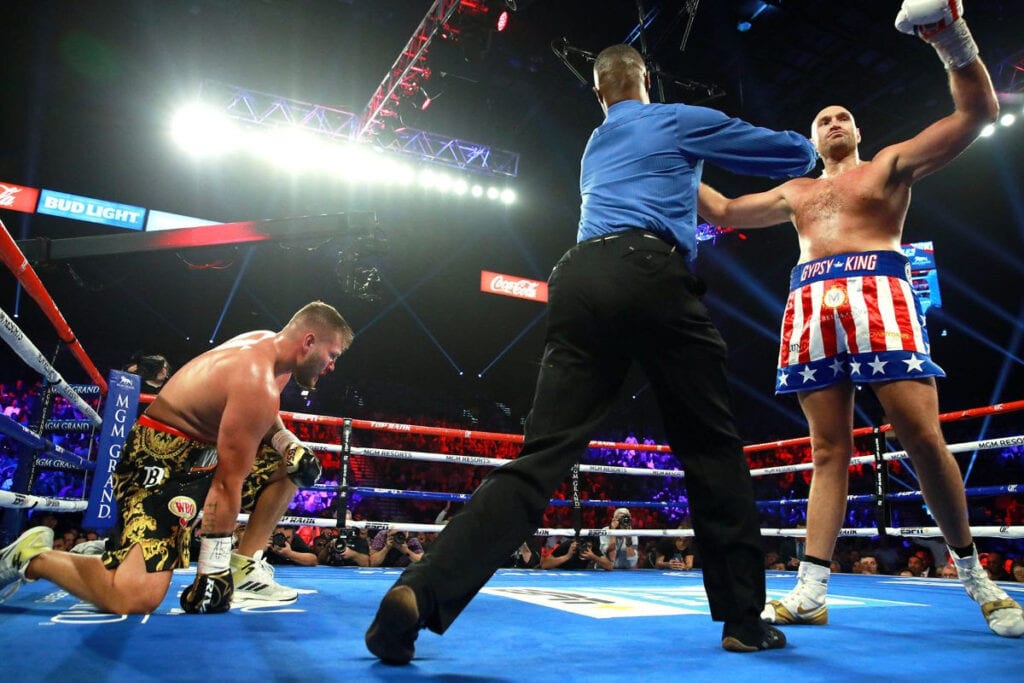 “The Gypsy King” Tyson Fury came to Las Vegas with a mission to make his imprint to the American crowds Saturday night. He did that not only leading up to the fight but also in the ring against an overmatched Tom Schwarz.

“I came here to put on a show for Las Vegas, and I hope everyone enjoyed it as much as I did,” Fury said after the fight. “I want to thank everyone for putting on a great show. ESPN was promoting the show every day for four weeks. There was a 2.5-hour documentary on ESPN last night. {Top Rank is} the greatest promotional company in the world.”

Fury, who entered the ring to James Brown’s “Living in America” in homage to Rocky IV, was in control from the opening bell against Schwarz. Fury stated that in the ring he would figure out Schwarz Saturday and by the start of the second round he figured him out. Fury knocked down  Schwarz early in the second and from there was the beginning of the end. Shortly after that, Schwarz’s corner threw in the white towel, and referee Kenny Bayless stepped in to end the one-way traffic contest.

In the end, we all knew this was the result of this fight once it was announced. Fury did confirm after the match the rematch with Deontay Wilder in 2020, which at the end of the day boxing fans, and media will get what we all have been clamoring.

? Post fight interview with the one and only @tyson_fury and his thoughts what's to come with @BronzeBomber ?#FurySchwarz pic.twitter.com/eMbCAjPX47

He also ended the post-fight interview with an Aerosmith song. Pretty good rendition too. So until the megafight with Wilder, we’ll have these notes until then.

There is absolutely nobody like him. The most entertaining man in sports @tyson_fury #FurySchwarz ?? pic.twitter.com/2gkKuVE3uL