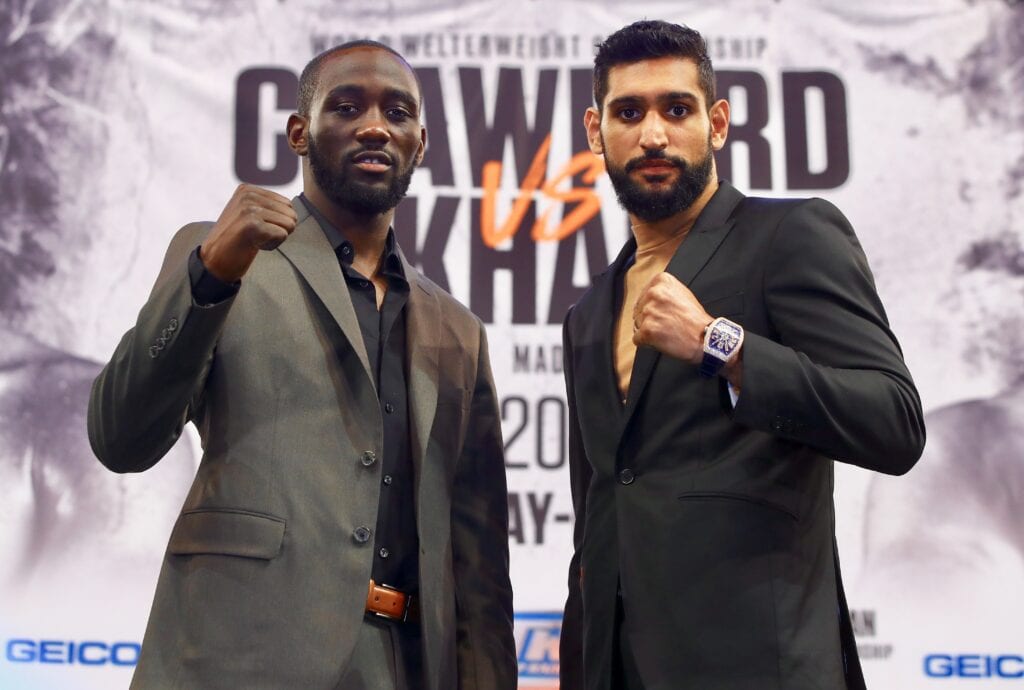 It’s already been a  year of “what if, what could have been and I paid what on PPV?”  This is especially, as it relates to the trio of Welterweight Title showdowns that continued on Saturday night at Madison Square Garden. As you probably know by now, Terence Crawford’s latest defense of his WBO World Welterweight Title ended controversially and anti-climactically after Crawford’s accidental low blow caused Amir Khan to surrender and the fight to be stopped.

Khan, the former World Junior Welterweight Champion was clearly being outclassed. But, instead of a spectacular finish leaving the public satisfied, we were left, yet again in the first four months of 2019, with the latest in a string of fights that can only be described as “disappointments.”

Disappointments, because there was so much potential in them all, but in the end, they all failed to deliver any drama or a memorable outcome.

The first of those was the January pay-per-view with legendary six weight division champion, Manny Pacquiao and what turned out to be his dull upset of former World Champion, Adrien Broner. Sure, the fight had the makings of entertaining,  especially with Pacquiao showing a recent resurgence and Broner still allegedly being in the prime of his physical condition.

However, as had been the case on a couple of previous Broner fights, he had no real game plan, as he clutched, grabbed and wrestled with Pacquiao for much of the fight. The crowd booed lustily, as the rounds wore on, and Manny won by an easy decision.

For the paying public on Pay-Per-View, you were left with feeling robbed of your investment.

Fast forward to March, and the build-up for Errol Spence’s latest defense of his IBF version of the 147 lbs. championship. Spence took on unbeaten World Lightweight Champion, Mikey Garcia at the Dallas Cowboys’ AT&T Stadium, again on Pay-Per-View.

Many, including me, bought into the potential “Fight of the Year” hype for this one.

And all though Spence was dominant by scoring with his jab and combinations for 12 rounds, it was obvious from early on that Garcia was simply a blown up lighter-weight fighter who couldn’t hang at Welterweight.

So, even though you give Garcia credit for going the full distance (unlike what Khan didn’t do Saturday night at MSG),  there wasn’t much more of a take away that night in North Texas.

And if someone asked, “did you get your money’s worth?,” you couldn’t look at them legitimately and say, yes.

Finally, to the “dud” conclusion on Saturday night.

Crawford was clearly winning the fight by scoring almost at will. Although, there should be a concern from he and his camp, that Khan was repeatedly hitting him with lead right hands, as the fight wore on.

Then came the ending that everyone is still trying to understand. Crawford clearly landed a left hook to Khan’s upper right thigh just below the belt, an area that is not protected by the boxing cup.

And you can’t just disregard a solid punch to an unprotected area of the leg.

But how hurt was Khan by that alone? Only he knows and he was clearly he was limping around after the shot was delivered. Also clearly, Virgil Hunter, the former world champion and Khan’s trainer, didn’t want the fight to go on either.

We have learned since last night that Khan was fighting with elbow damage, including floating chips or particles that made it painful for him to punch. Further, ESPN mics heard Khan tell Hunter in his  between the 4th and the 5th round that he had hurt his right hand.

So, an argument can be made that Khan was looking for an easy way for the fight to be over without getting pummeled on Saturday. And, the low blow definitely provided that opportunity.

Make no mistake, Crawford was winning, and was going to either win easily on points or a stoppage at some point in the back half of the fight.

That part is not in question.

What is in question is: when we will get a potential large fight that involves Spence, Pacquiao, Crawford and maybe includes the likes of Keith Thurman or Shawn Porter who are the other two welterweight Champs?

And, further, if we get that latest big showdown later this year or in the first half of next year, are we going to be impressed and thrilled, or is it going to continue the trend so far in 2019?

The trend of lots of talk and hype, but in the end, only questions and disappointment about what we just witnessed.