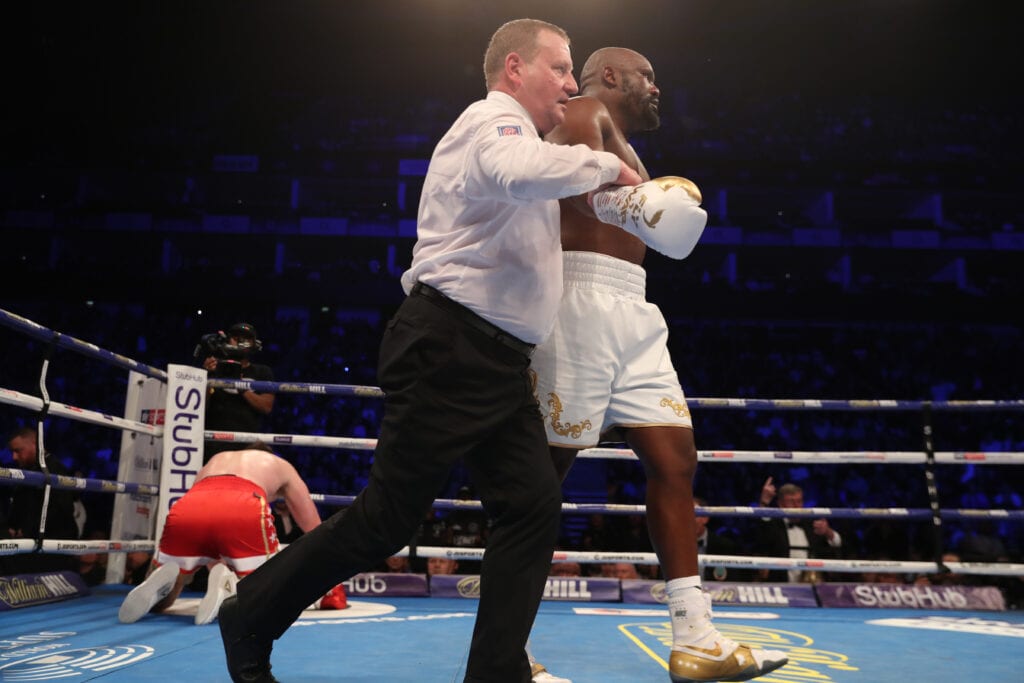 The co-main event out in the o2 Arena in London was an explosive one with Dereck Chisora blasting out David Price in the fourth round Saturday night. Price took this fight on three weeks’ notice, and it showed in the ring as he wasn’t able to withstand the punishment that Chisora was applying in the contest.

This contest led to the main event of Regis Prograis taking on Josh Taylor in the unification bout at 140.

It started slow and a little sloppy on Chisora’s end as the height advantage for Price played a huge factor in this one as he was continually landing and warned for low blows early on in the contest. Chisora adjusted, however, and when he did, he poured in on. Towards the end of the third round, he landed a hard right that hurt Price but was luckily saved by the bell.

The fourth round was all Chisora needed to put Price away as he was hit a hard shot that knocked him down. He was able to beat the ten count, but despite this, Price’s corner threw in the towel ending the contest.

In comes the towel from the Price corner after being dropped, @DerekWarChisora gets the victory in the fourth to the land the WBO Intercontinental strap 💥 #ChisoraPrice pic.twitter.com/BIt8wpqFqv

“He stepped up at a time to save the show,” Chisora said after the fight. “Shout out to David Price.”

While Chisora will march on and look for a more prominent name at heavyweight, he hinted that he would have no problem with facing original opponent Joesph Parker who had to pull initially due to a spider bite.

“We can get Joseph Parker ASAP,” Chisora said after the fight. “I hope he doesn’t get another spider bite.”

Chisora (32-9, 23 KOs) got the job done in the ring but even acknowledged that this was a lot of work in his 41st pro fight. He got the knockout, but after griping about not being the main event on this card after this performance, one can safely argue that this performance wouldn’t warrant it.

My takeaway from attending Beterbiev-Gvozdyk
Taylor defeats Prograis-unifes 140 belts
Advertisement
To Top
We use cookies to ensure that we give you the best experience on our website. If you continue to use this site we will assume that you are happy with it.Ok