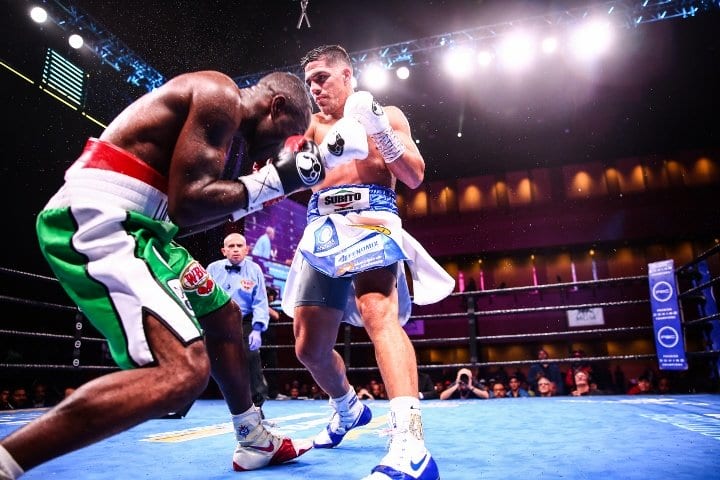 Castano, after the contest that he was in control of, stated he doesn’t know who next up for him at middleweight.

“I’m pretty sure the other guys watched me; I’m not sure they want to fight me,” Castaño (16-0-1, 12KOs) told BoxingScene.com and other reporters following Saturday’s win, “They know I’m a dangerous fighter.”

“I need to stay busy. I am a fighter, this is my life. I need to fight and am willing to fight anyone.”

Castaño is coming off a draw against Erislandy Lara back in March. Castano, after this stoppage, reflected on that fight as well.

The one caveat that Castaño put out there is he is fighting at 154 pounds and nothing more.

“Fighting at] at 160 is too heavy. I’m too small.; I’m small for 154 already,” joked Castaño, who at 5’7” is already undersized against most divisional competition. “That said, show me [enough] money and the right opponent! There is Sergiy Derevyanchneko, who I fought in a platform that nobody recognizes as a pro fight (World Series of Boxing). He was a very strong guy.”

Castaño looked impressive in this contest and it’s worth nothing if he somehow gets back into the mix of the WBA rankings sooner rather than later after this one.