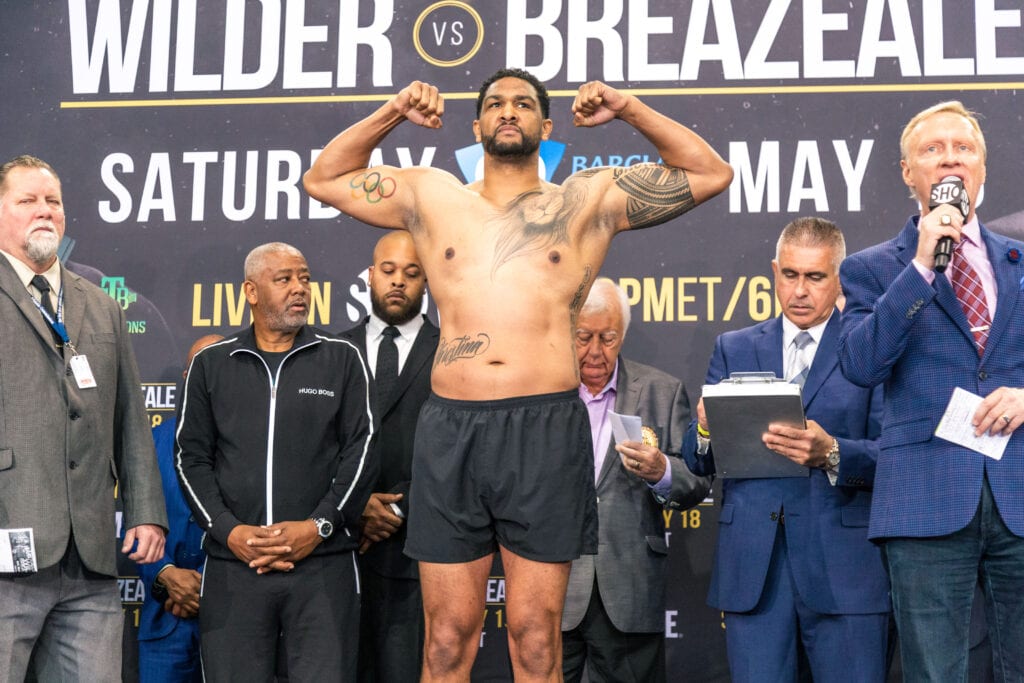 How can Dominic Breazeale hang in with Deontay Wilder?

With the WBC Heavyweight Title on the line Saturday night in Brooklyn, we have enlisted David Schacht’s assistance in breaking down Deontay Wilder vs. Dominic Breazeale. In addition to an extensive amateur fighting background in Alabama, Schacht has been friends and associated with Wilder and his management team, etc. for years. So, Schacht now gives us an objective look at what could and what he believes will happen in this one.

This Saturday night spectacle rests on the gigantic shoulders of Deontay “Bronze Bomber” Wilder and Dominic “Trouble” Breazele. Trouble certainly is an appropriate moniker, as Breazele takes on the unbeaten champ. Perhaps, Wilder should be called the “Brooklyn Bomber,” as he’s fought at the posh Barclays Center on four previous occasions scoring four colossal KO victories.

A KO for Wilder is more than possible, and on paper, it’s nearly certain, as the Alabama native stands undefeated at 41 -0-1 with 39 of those victories coming by KO. Meanwhile, Breazele may indeed prove to be trouble for Wilder, as his lone loss stems from a KO against British unified champ, Anthony Joshua.

He may not have been the most dangerous challenger, but Breazeale is a top ten heavyweight. Breazele also claims the title of biggest heavyweight contender in the world, standing 6’7 and weighing 255 lbs. Friday and who showed toughness in his first foray into challenging for a championship against Joshua.

He then showcased his more toughness and durability in a four round shootout with Poland’s dangerous Izu Ugonoh, stopping him after surviving a big shot that knocked the Breazele to the canvas.

Standing in with Wilder

So far, Wilder has demonstrated a solid chin, as he was able to take big punches from the unbeaten and much feared Cuban, Luis Ortiz in March of 2018. Ortiz was a much more dangerous opponent than Breazele with bigger punching power, better footwork, and better defense. He gave Wilder a run, before Wilder eventually knocked him out in the 10th.

Wilder tipped the scales Friday at 223 and that’s much bigger than the Tyson Fury fight last December. He will jab high and utilize feints to rip down the high guard of Breazele. Wilder and his God given gift of aggression and viciousness keep causing knockouts that make for must see TV. And, bombs are going to detonate on a bloody, worn out canvas, as these two titans both look for the KO.

Breazele and his durability won’t be there to save him this time, as we all know, Wilder has time and again shown the right hand to be the touch of death. His fights are are amazing, as you don’t know when that right is coming. But, it is coming. Ask Fury from the 12th round of their fight.

How Breazeale can pull an upset

Breazele must maintain his pace, and sit on the outside range of in the clinch. The closer he is to danger, the farther he is from harm, as Wilder needs space to throw his shots. And, if Breazele is able to stall Deontays offense, it can reverse fortunes for the fighters.

Bottom line, Saturday may end up as Deontay the one being in “trouble.”

However, it’s not likely.

Just how dangerous is Denotay Wilder’s right hand?
Undisputed pursuit continues- Joshua’s turn Saturday night
Advertisement
To Top
We use cookies to ensure that we give you the best experience on our website. If you continue to use this site we will assume that you are happy with it.OkPrivacy policy