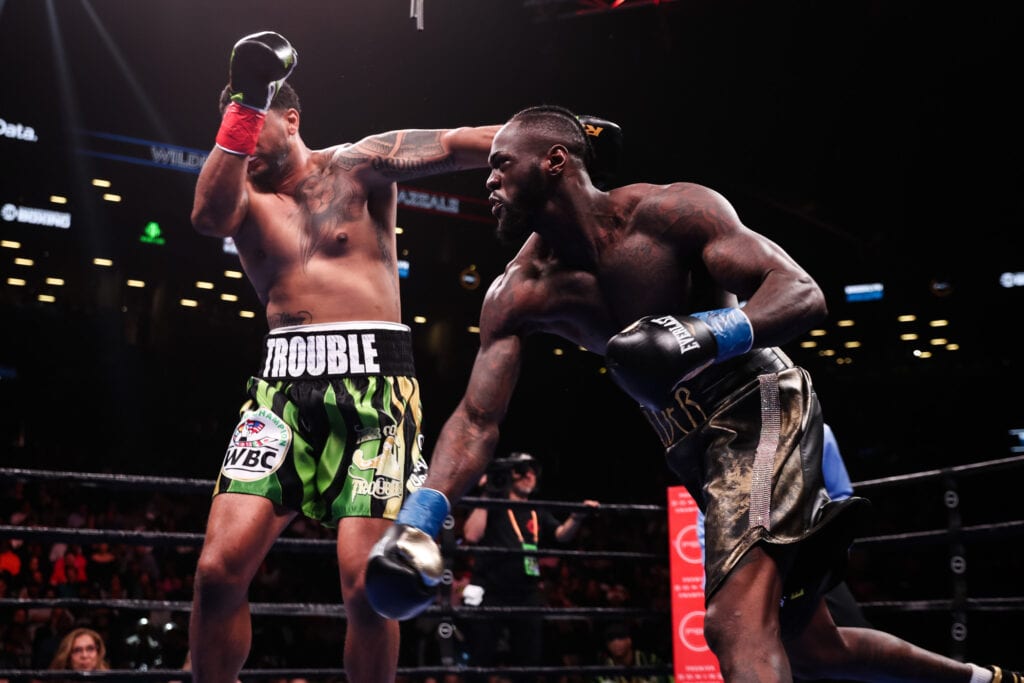 We are two weeks away from WBC Heavyweight Champion, Deontay Wilder, putting his belt back up on the line in a rematch with Luis Ortiz in Las Vegas. And on Friday, Wilder made it clear that he isn’t focused on anything other than taking Ortiz out, again.

Wilder was a guest on the Big Fight Weekend podcast and in our one-on-one interview shared how his camp has been going, how a potential second fight with Tyson Fury early in 2020 is not on his mind, and not even the high-stakes Saturday Alabama vs. LSU college football game has him distracted:

Wilder, 41-0-1, 40 KOs certainly has a ton at stake in a rematch with the hard-punching Cuban Ortiz. First, he tries to keep his unbeaten record, legacy and reputation intact by securing a rematch victory.

Wilder and Ortiz fought a tremendous initial fight in March of 2018. That’s when, Ortiz hurt Wilder for the most significant time in his career in the 7th round, wobbling the champ along the ropes. Wilder weathered the storm, and survived to the bell.

Later, he wore down and finally damaged Ortiz, once and for all, with big right hands. He knocked Ortiz down twice in the 10th and the fight was stopped immediately after the second one, keeping Wilder’s perfect pro record in tact.

“If you’re a boxing fan or even if you’re not a boxing fan, and you just want to come in/tune in and see what Wilder is all about, this is a fight where you can come in and say ‘you don’t know what the outcoe is going to be,'” Wilder told us.

“That’s what I like about this fight. To give the fans something to look forward to…. To say, ‘Man, I don’t know what’s going to happen in this fight.’ It could go both ways.”

Now, there is also the heavily publicized potential February rematch with former Undisputed Champion Tyson Fury. Wilder and Fury fought a controversial 12-round draw in Los Angeles later in December of 2018, which is the only blemish on his record to date.

Although a formal announcement of Wilder -Fury has to wait for Wilder to defeat Ortiz in 2 weeks,  “The Bronze Bomber” did confirm on the podcast that the contract with Fury is signed February.

However, there’s been much speculation that should Wilder be victorious and then, two weeks later Premier Boxing Champions fighter Andy Ruiz successfully defends his versions of the heavyweight title in a rematch with Britain’s Anthony Joshua in Saudi Arabia, that a deal may be worked out to pay Fury to step aside.

This is because with Wilder and Ruiz wins, Al Haymon and the massive money involved in U.S. television may be able to secure an Undisputed Title fight with their two fighters, Wilder and Ruiz.

Finally, even though he resides in Tuscaloosa, Alabama and grew up wanting to play football for the Crimson Tide, Wilder made clear that he’s only focused on his fight not on Alabama’s huge Showdown with rival LSU in college football Saturday afternoon.

“They ‘play’ football. In what I do, you can’t ‘play.’ I gotta stay focused… I’m risking my life,” Wilder humorously responded.

And, part of not “playing” boxing is standing in front of Ortiz, ready to trade bombs again, in a massive pay-per-view rematch on November 23rd.

Canelo-Kovalev look to make history in Vegas
Wilder-Ortiz 2 to take center stage in Vegas
Advertisement
To Top
We use cookies to ensure that we give you the best experience on our website. If you continue to use this site we will assume that you are happy with it.Ok