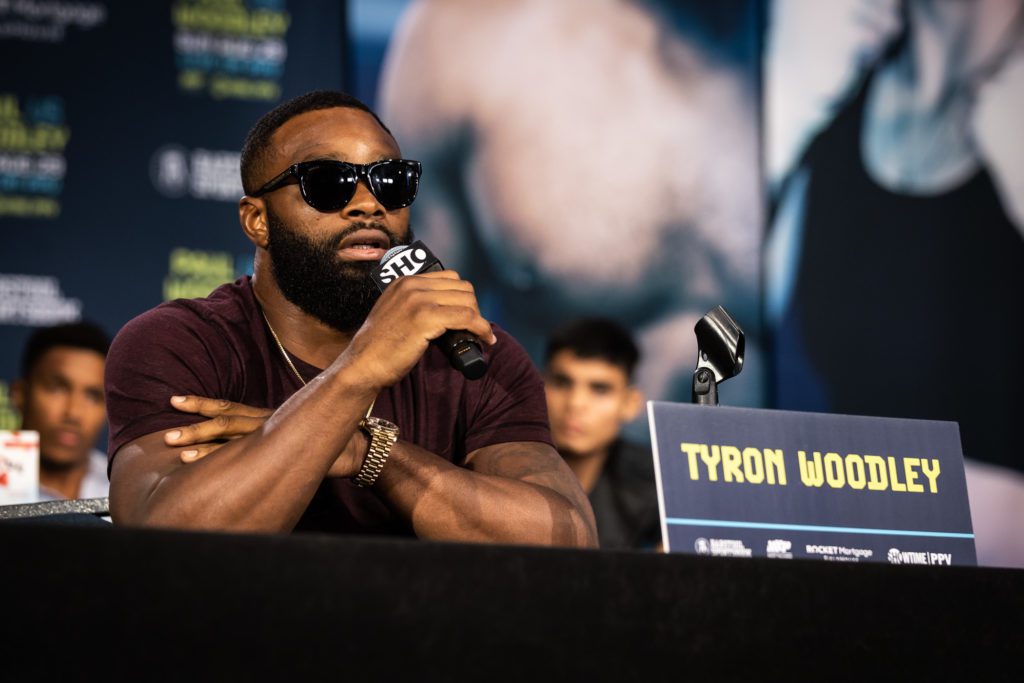 Serious question here. Are you picking Tyron “The Chosen One” Woodley to stop the train known as Jake Paul Sunday night live on Showtime pay-per-view from the Rocket Mortgage Arena in Cleveland, Ohio?

“I’m polarizing. I get it. I don’t care what people think. Most people aren’t like that. They’re scared to rub people the wrong way. Some people want to see me lose, but I’m here to stay,” Jake Paul said at the final press conference Thursday.

Listen to the latest episode of “The Big Fight Weekend Podcast” with special guest Dan Canobbio of “Inside Boxing Live” and Compubox as we speak on this contest and the entire card and more!

Paul said those words, and towards the end of the press conference, it got a little unruly, and a brawl broke out. Our good friend Carlos Toro tweeted about what it was as it got ugly.

I was inches away from the individual who allegedly had a knife. Couldn’t quite see it amidst all the chaos (he may have been holding it on his right side which I couldn’t see), but it was a pretty scary situation as it happened in real time. https://t.co/o6LJPfpypG

“I was inches away from the individual who allegedly had a knife. Couldn’t quite see it amidst all the chaos (he may have been holding it on his right side, which I couldn’t see), but it was a pretty scary situation as it happened in real-time,” Toto said on Twitter Thursday, speaking about the fight that broke out.

Nobody signed up for any of that, and what started it was someone in Paul’s camp hurling insults at Woodley’s mother.

“This is the fight game. You can say what you want to say, and you can do what you think fighters do. Jake does all the things to build the fight, but we’re really here now. He’s getting hurt on Sunday,” Wooley said at the final presser Thursday.

“I’m going crazy on Sunday. At the end of the day, it’s been a long time coming. I’m thankful for my team that’s supported me, but I’m also thankful for everyone who counted me out. When everyone comes against you, it shows how powerful what you’re about to do is.”

Woodley sounds ready to go, and if you’re in the short-term investment market as of this writing, he was still a slight underdog to pull off the upset. Either way, this fight is scheduled for 8 rounds. No one is expecting that, so I’d strongly suggest whatever side you pick, take the early rounds if you can find a prop for it.

But, you are picking Woodley to win, right?