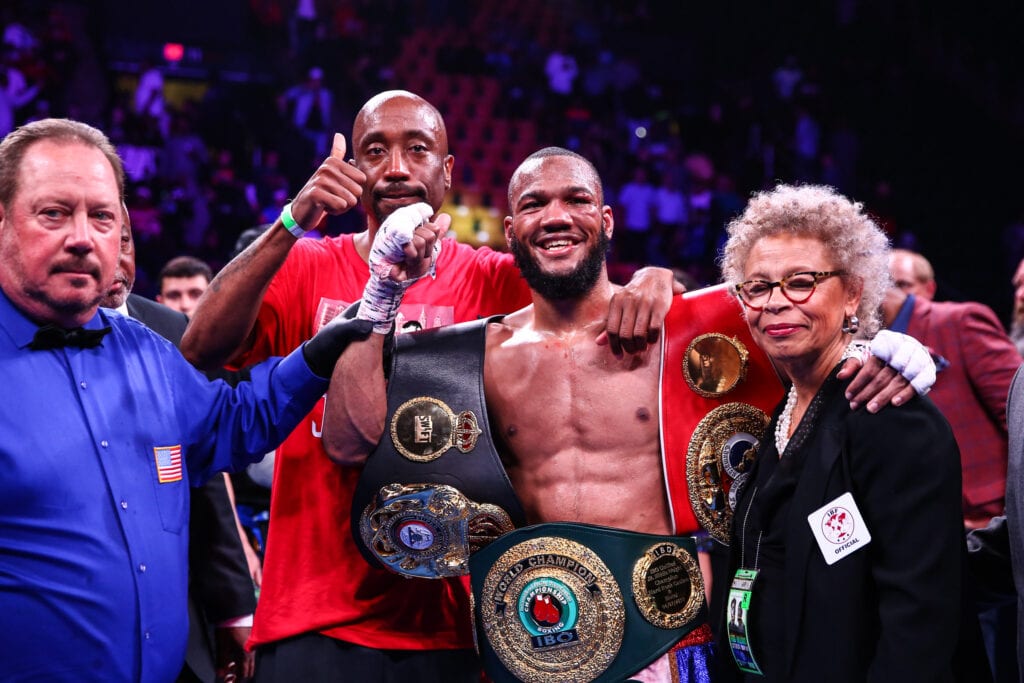 Williams face off against Rosario in Philly

Unified 154-pound world champion Julian “J-Rock” Williams will defend his WBA and IBF titles in a Philadelphia homecoming against the hard-hitting Jeison Rosario on Saturday, January 18 in the FOX PBC Fight Night main event and on FOX Deportes live in primetime from Temple University’s Liacouras Center.

Tickets for the live event, which is promoted by TGB Promotions, are on sale Friday, November 29 at 12 p.m. ET and can be purchased by clicking here directly or by calling 800-298-4200.

“Julian Williams earned one of 2019’s most thrilling victories in May against Jarrett Hurd, and there’s no better way for him to follow that up than by defending his WBA and IBF titles in front of his hometown fans in Philadelphia,” said Tom Brown, President of TGB Promotions.

“The great fight fans in Philadelphia are in for fireworks because Jeison Rosario hits hard and he comes to pull off the spectacular upset, and he only needs one punch to do so. Combined with the addition of one of boxing’s best young stars in Chris Colbert in his toughest test to date against Jezreel Corrales, FOX PBC Fight Night will be must watch from start to finish on January 18 at Liacouras Center.”

Philadelphia’s Williams (27-1-1, 16 KOs) captured his world titles in a FOX main event in May when he upset Jarrett Hurd’s homecoming defense in a fight that is a frontrunner for 2019 Fight of the Year. Williams took full advantage of his second title opportunity with a spirited performance and an impressive game plan that negated the hard-charging and physically bigger Hurd.

The 29-year-old will now headline in his hometown, marking the first time he’s fought in Philadelphia since a 2011 victory over Eberto Mendoza. Williams earned his title opportunity by winning four-straight fights after a defeat to Jermall Charlo in 2016, including wins over former champion Ishe Smith and Nathaniel Gallimore.

“This is going to be great having a homecoming fight back in Philadelphia,” said Williams. “I’m excited for the crowd that’ll be at the Liacouras Center and to be back fighting on FOX. I haven’t fought in Philadelphia since 2011, so I can’t wait to get back in the ring in front of all my people. Rosario is a good fighter and I’m very familiar with him. I know he packs a solid punch and that he’s been on a tear ever since his lone loss to Nathaniel Gallimore. So he’ll be a stiff test for me, but I’m prepared to win. Most of all, I’m just excited to defend my titles and as a unified champion in front of my hometown crowd.”

Born in the Dominican Republic and now fighting out of Miami, Rosario (19-1-1, 13 KOs) will take an eight-fight unbeaten streak into his first world title fight on January 18. The 24-year-old has taken down a slew of contenders and rising prospects including Jamontay Clark, Justin DeLoach and Mark Anthony Hernandez, all of whom were either stopped or knocked down against Rosario. Most recently, Rosario won a decision over veteran contender Jorge Cota in April.

“I’m very thankful and excited for this opportunity,” said Rosario. “I’m going to take advantage of it. I plan to bring these titles back to the Dominican Republic by knockout, but if I have to go 12 rounds, I’m ready. I learned a lot from my first defeat, and it will never happen again. I also want to thank PBC, my promoter Sampson Boxing and my manager Caesar Mercedes for putting in this position. I can’t wait to make the most of it.”

One of boxing’s top rising prospects, Colbert (13-0, 5 KOs) showed off his emerging power with a sensational one punch knockout of Miguel Beltran Jr. in the first round of his most recent fight in September on FS1. The 23-year-old from Brooklyn, New York had an impressive amateur career and has already taken down three unbeaten fighters in his short pro career. He will look to kick off a big 2020 on January 18 after earning four wins in 2019.

“This is the stage that I’ve been waiting for,” said Colbert. “My last fight was the co-main event on FS1 and now we’re moving up to FOX. It’s time to show out! I’m going to show the world what the hype behind me is all about and prove that I’m a soon-to-be champion of the world. All I know about Corrales is that he’s a former champion who’s going to bring his A-game, but I’m looking to get him out of there. I’m excited to be back in Philly and I’m definitely going to have my crew and fans coming down from New York to show support.”

The 28-year-old Corrales (23-3, 9 KOs) will look to rebound after a narrow split-decision defeat to Ladarius Miller in July. Fighting out of San Miguelito, Panama, Corrales won a super featherweight title in 2016 when he went to Japan and knocked out Takashi Uchiyama before winning a decision in their rematch. He also owns victories over current 130-pound champion Rene Alvarado and Robinson Castellanos.

“Colbert is a good fighter but he’s not ready for what I can do in the ring,” said Corrales. “I’m going to show that I’m still one of the best in the division. This is a great opportunity to prove that. I’ve been training hard to be the best Jezreel Corrales. Thank you to my whole team for helping me get this fight. You’re not going to want to miss my performance on January 18.”