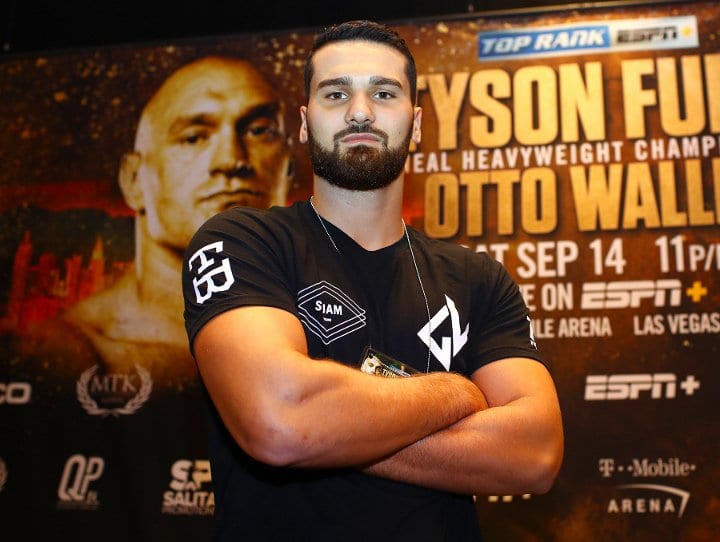 Vianello aims To Be The Next Italian Great at Heavyweight

Rising heavyweight star Guido Vianello has set himself some lofty ambitions as he looks to join a long and heralded list of Italian world boxing champions.

A former police officer in Rome who relocated to Las Vegas to fulfill his childhood dream with the help of S-JAM Boxing and Top Rank, the 6-foot-6 Vianello has been good as advertised so far, winning all six of his professional bouts by knockout.

Along the way, ‘The Gladiator’ has also sparred with the likes of reigning heavyweight king Tyson Fury, ex-Olympian Joe Joyce, and former world titleholder Joseph Parker, giving him an up-close look on what it takes to reach the next level.

Tons of young stars will round out the action next Tuesday night, LIVE from Vegas, led by @MikaelaMayer1 facing Helen Joseph in a 10-round Super Featherweight bout. pic.twitter.com/WftRvauyov

“I look at everybody because I want to become a mix of all of them. I love watching Vasyl Lomachenko. I try to make his movements in the ring.

“Sam Jones is exceptional, he knows what I want to do. He understood everything when we met in London. He understands that I want to become world champion, but now I need to build myself.

“I can’t think about that yet – my moment will come. I think after three years in my career I can start thinking about those big fights.

“In Italy, we have the army and the police. I left the police to come here because you cannot have a professional career if you are a police officer. I hope with me, we can restart everything. Italy has very good stories in boxing. I want to try to create new stories.”

One year later Ruiz upset of Joshua still resonates
Arum continues Crawford-Pacquiao fight speculation
Advertisement
To Top
We use cookies to ensure that we give you the best experience on our website. If you continue to use this site we will assume that you are happy with it.Ok