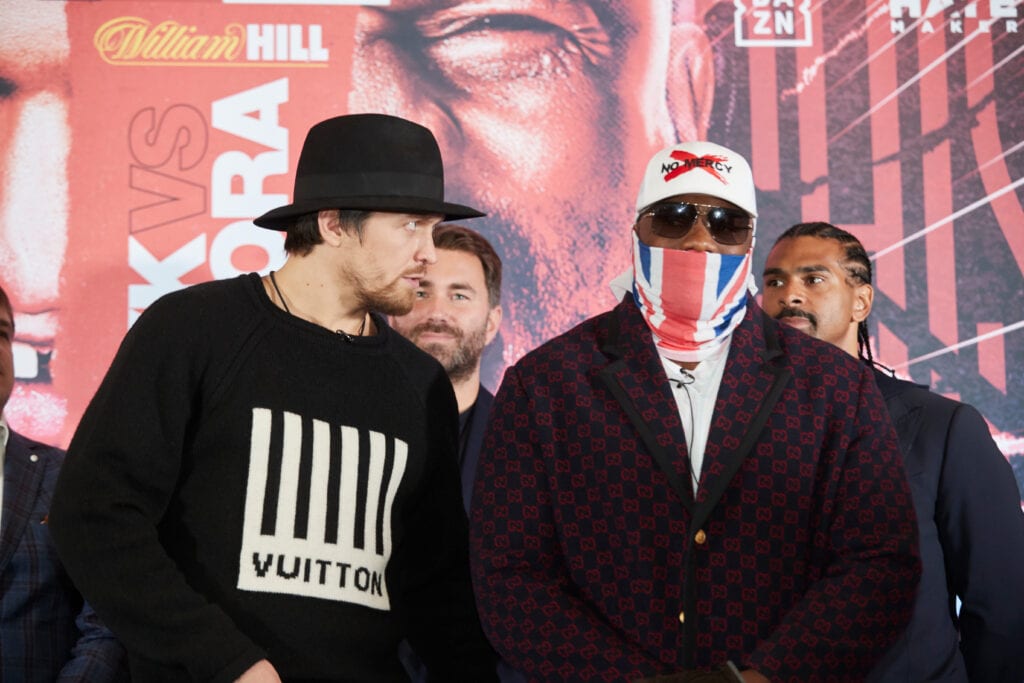 The two fighters and Matchroom boxing promoter, Eddie Hearn, held a press conference to discuss the upcoming May 23rd bout at the O2 Arena in London:

? Tickets on sale now to Fight Pass members and on general sale tomorrow at midday via @StubHubUK and @TheO2! #UsykChisora pic.twitter.com/nD6JgpuZEr

“I’m fighting one of the best out there (Usyk)… I’ll chuck whatever I can chuck! I’m pumped…” Chisora said Friday.

“He hits hard… I will train hard and will be in the best shape for this fight. I love boxing very much!,” Usyk stated about the upcoming battle.

As we wrote back in October when Chisora won his most recent fight over England’s David Price by 4th round KO, the veteran British contender has been wanting the opportunity to get in with the unbeaten Ukranian former Olympic Gold Medalist, who’s now fighting at heavyweight.

Usyk, 17-0, 13 KOs, won his first heavyweight bout earlier in October against 38-year-old last-second replacement Chazz Witherspoon in Chicago by 7th round TKO. This fight with Chisora was originally being discussed as a March or April date, but then, Usyk reportedly suffered a slight elbow injury in training that has delayed things.

It should also be pointed out that 36 years old Chisora is 32-9 and hasn’t won a really significant fight, since Dillian Whyte knocked him out in December of 2018. And, that was the second time Whyte had beaten Chisora in their careers. His last action was in October of last year, when “War” Chisora kayoed fellow Englishman David Price in the 4th round of their bout.

Still, the WBO has Usyk ranked as their #1 Heavyweight challenger and has mandated that Unified Heavyweight Champion, Anthony Joshua fight him after his upcoming title defense against Kubrat Pulev scheduled for June 20th at London’s Tottenham Hotspur Stadium.

So, this is obviously a test for Usyk to maintain that ranking, but a “puncher’s chance” for Chisora to pull the upset and get himself in the discussion to possibly fight Joshua, too.