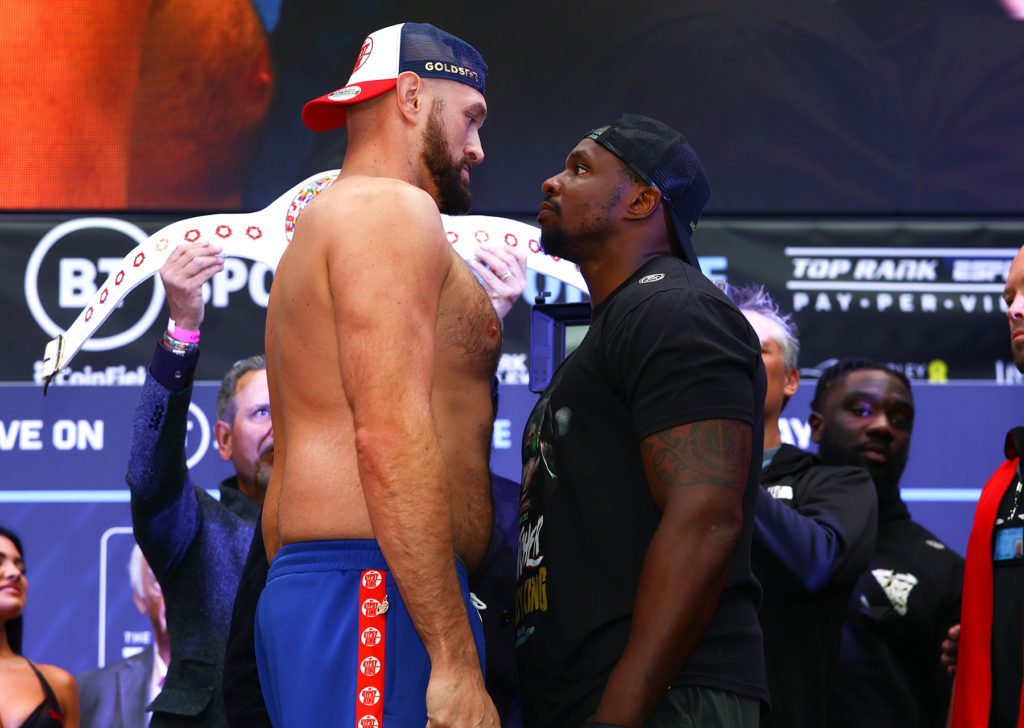 The countdown to Saturday night’s WBC Heavyweight title fight between Tyson Fury and Dillian Whyte in London is winding down, and the final public piece of the build-up was Friday afternoon in London. That’s when Fury and Whyte stepped on the scales.

Fury, who definitely looked in good shape during the open to the media workout earlier in the week checked in at 264.8 lb., which is the lowest that he has been since he fought Otto Wallin (at 254 lb.) in Las Vegas in September 2019. As a further reference point, Fury was 277 lb. (the largest of his career) when he stopped Deontay Wilder in their trilogy fight last October in Vegas.

As for the challenger ,Whyte is the heaviest since he weighed 271 lb. in December of 2019 fighting Mariusz Wach in Saudi Arabia. White weighting 253.25 lb. is 6 lb. more than he was in March of last year for his rematch revenge win over Alexander Povetkin in England.

Make sure to hear a full preview of Fury-Whyte on our latest “Big Fight Weekend Preview” Podcast with our insider Dan Rafael along with other insightful guests by clicking the player below:

Ultimately what will the weight changes mean? We won’t really know, if and until, the fight starts to progress past say the fourth or fifth round. Then, we’ll find out how fresh Fury still looks, or not and/or if Whyte does not look good at the heavier weight?

Having gone through this list of online sportsbook apps, we can see that Fury, 31-0-1, is the heavy favorite in this matchup against the 28-2 Whyte. It varies from site to site but the overall gist is that Fury is about -550 to -600 to win while Whyte is about +400 to pull the upset. Judging from those odds, it seems the bout is quite predictable, but then again, anything can happen with the Heavyweights. If you want to make an easy dollar can research into which site offers the best value for the event. And, don’t forget to make sure online sports betting has officially launched in your state.

Meanwhile, Fury is defending a portion of the heavyweight title in his homeland of the U.K. for the first time ever with over 90,000 expected to attend at Wembley Stadium. It is actually only the second title defense that Fury has ever had in his career with the Wilder win last fall being the first. But, there will be a massive partisan crowd favoring him.

As for Whyte, it is obviously the biggest stage he has ever been on, while challenging the unbeaten Fury for a shot it heavyweight supremacy. And, he’s hoping to pull a shocker out of the mold of Andy Ruiz’s stunning win over England’s Anthony Joshua in 2019.

And, soon, we’ll find out what kind of shot he has to do it.