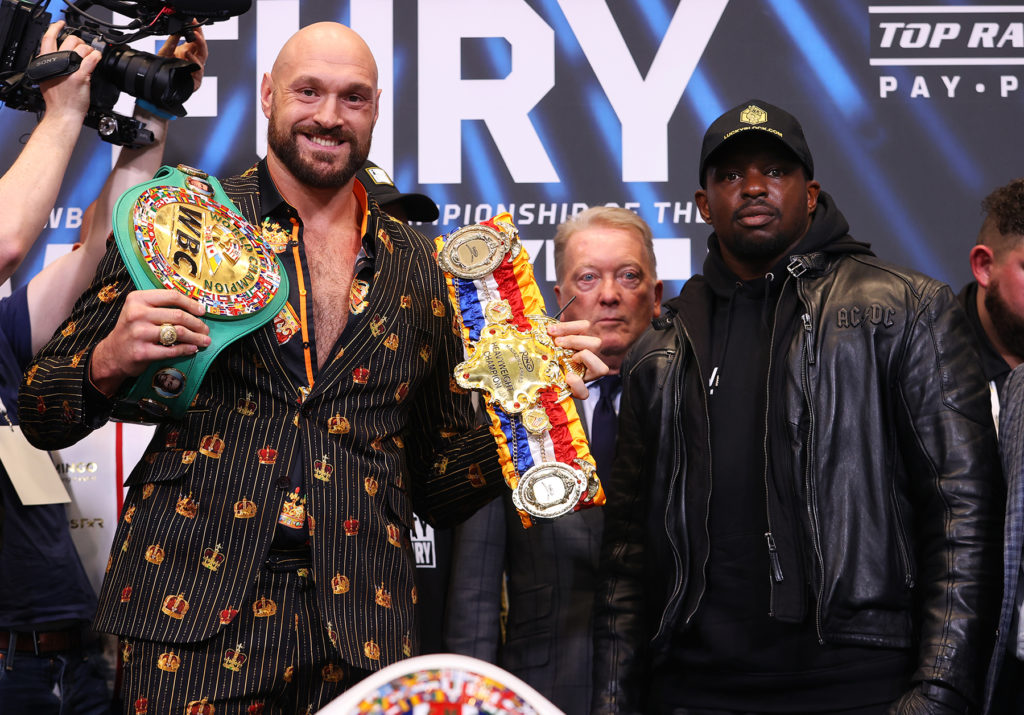 Tyson Fury-Dillian Whyte All Business Together At Presser

Heavyweight champion Tyson Fury and British countryman Dillian Whyte, the WBC interim titleholder and mandatory challenger, had yet to see each other face to face since their fight was made in late January.

Whyte skipped the kickoff news conference on Feb. 28 in a snit over his contract terms from the record $41,025,000 purse bid Queensberry Promotions’ Frank Warren, Fury’s co-promoter with Top Rank, won, leaving Fury to go solo in the spotlight.

In fact, Whyte boycotted the entire promotion until last week when he and Warren worked out a contract amendment that didn’t raise his pay but gave him a few things he wanted, such as additional ticket access.

Now Whyte is fully engaged in the promotion, although he missed Tuesday’s media workout because of what organizers said was a travel issue with his private plane flying from his training camp in Portugal to London.

Finally, on Wednesday, Fury and Whyte were together to size each other up, talk up the fight in each other’s presence and pose for photos and videos at a news conference ahead of the fight, which will take place on Saturday (ESPN PPV in the U.S. for $69.99, BT Sport Box Office in the U.K., 2 p.m. ET) before an expected British record sell-out crowd of 94,000 at Wembley Stadium.

But instead of the nasty and profane back-and-forth Fury and former titleholder Deontay Wilder engaged in ahead of their 2021 fight of the year in October, Fury and Whyte were on their best behavior, professionals all the way.

Whyte (28-2, 19 KOs), 34, said his refusal to participate earlier in the promotion was just business.

“Stuff needed to get done. Obviously, the fight was signed, but there were other things behind the scenes that needed to get signed,” Whyte said. “Me and Frank got together. Credit due to him as me and my team were trying to pick up the phone for a long time to get stuff done.”

When the formal part of the news conference was over they shared a light-hearted moment when after a few seconds of an intense face-to-face staredown as they posed for their first photos together, Fury turned his frown upside down and tickled Whyte with both hands around the waist. He made baby sounds and laughed. Whyte took it in fun and also laughed and patted Fury on the shoulder. When the face off was over they warmly shook hands.

Previously, Whyte also shook hands with Warren and Top Rank president Todd duBoef, a sure sign that they’re all finally on the same page in terms of the business side of things.

But just because Fury (30-0-1, 22 KOs), 34, who will be making his eighth defense of the lineal title and second of the WBC belt, and Whyte showed good humor and a little tickle does not mean they plan to go easy on each other come fight night.

“We’ve had a great preparation. There are never any complaints from me,” Fury said. “We always do what we can do in training camps and do the best that we can do on the night. I’m sure Dillian Whyte’s had a great training camp as well. He’s a good fighting man. The fans are in for a real treat. I know Dillian. I know him personally, and he knows me. And we’re going to rock ‘n roll on fight night. We’re ready to throw down and treat us all to a hell of a barn storm.”

Whyte has been waiting for years for a title shot and is clearly the best heavyweight in the world who has yet to get a chance to fight for a world title. And he gets to do it at home.

“It means everything to me to be fighting in my home country, and especially because it’s for the world title at Wembley,” Whyte said. “It’s not too far from where I’m from. It means everything. It’s massive. It’s a moment I’ve been waiting for. It’s a big fight. Like Tyson said, we didn’t expect to be here. But I’m here, but I’ve taken risks time and time again. I’ve had a couple slip-ups along the way, but I’m here and I’m ready to go. You won’t hear any bullshit from me. I’m ready to go.”