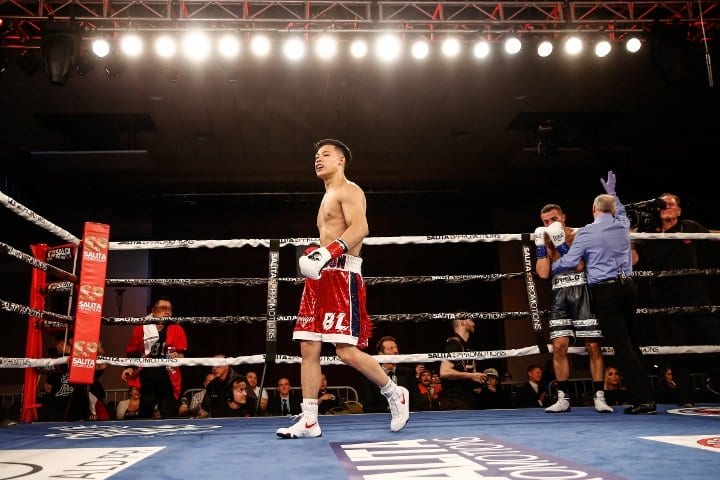 These studio boxing shows aren’t for me

In the United States, the coronavirus epidemic has sporting events major and minor either to s screeching halt or off the board altogether. One option that seems to be floating around as the country finds ways to control and limit the spreading of the virus is the idea that is having these studio boxing shows without the risk of having fans either in the arena or venue.

Showtime recently had this for their latest ShoBox: The New Generation card, which saw in the main event Brandun Lee blast out an outmatched Camilo Prieto over three rounds. The four-fight card aired with no fans and only “essential personnel” at ringside. While I’m all for the “unique” broadcast as a one-off and understand why it was done, I’m not here for the long haul of these broadcasts, whereas WBO Featherweight champion Jamel Herring stated best “all I hear is feet”.

Boy, this is depressing! Watching this ShoBox card, and all I hear is feet! 🤦🏾‍♂️

Boxing, like all other sports we use as a significant distraction from the realities of life and to be entertained. Watching the Showtime card Friday while I was entertained, reminded me why seeing sports live is all about.

Top Rank CEO Bob Arum was on the midday boxing show on SiriusXM Friday, however, to propose the idea of these studio type shows continuing.

“We’re gonna try to set up a studio atmosphere in Vegas, so we can do fights maybe,” Arum said during Friday’s episode of “The Ak & Barak Show” on SiriusXM. “You know, ESPN, unfortunately for them, doesn’t have content.

They don’t have the NBA, they don’t have college basketball, they don’t have the women’s tournament. So, they’re gonna need content. And we can provide content. We’ve talked to the athletic commission here [in Nevada], doing fights in a studio. But we’ve got to get the testing done. We’ve gotta get enough tests here, so that we can test the fighters before the fights, so we can show that they do not have the virus. Or, if they have the virus, they can’t fight. I mean, that’s what we’re working on.”

While ESPN, as Arum stated, has zero, and I mean ZERO programming as of this writing (so much so, they’re blowing out their 30 for 30 documentary series on a binge-watching loop). Nothing beats the atmosphere of crowd noise good or bad at the event.

Saturday night in Chile, a boxing card was held in the main event Andres Campos retained his WBA Fedebol and acquired the vacant WBO Latino flyweight belt against Pedro Villegas. While the crowd in attendance wasn’t the biggest by any means, they were raucous and made for a big fight feel that boxing matches are tailor-made for.

In the main event in Santiago de Chile, Andres Campos (9-0, 2 KO's) scored a knockdown in the 6th on his way to a solid 10rd decision win over a game Pedro Villegas (12-1) to defend his WBA Fedebol and take the vacant WBO Latino flyweight title

While I understand Arum in having some content in front of nobody is better than no content, which is what we are getting now. I just don’t see how that will help anyone avoid the reality of the situation that we are facing in the States right now. Could you imagine any of your favorite boxing fights of all-time behind a backdrop of no-one to see it live? Thrilla in Manilla to empty chairs. Mayweather versus Pacquiao with no one present. Tyson fights with nothing but the Don King Promotions banner hanging.

No thanks and I’ll wait until we can get some normalcy around here for it.

Shields Brother gets 1 year for Bashir Assault
Report- Davis and Santa Cruz looking at June PPV date
Advertisement
To Top
We use cookies to ensure that we give you the best experience on our website. If you continue to use this site we will assume that you are happy with it.Ok