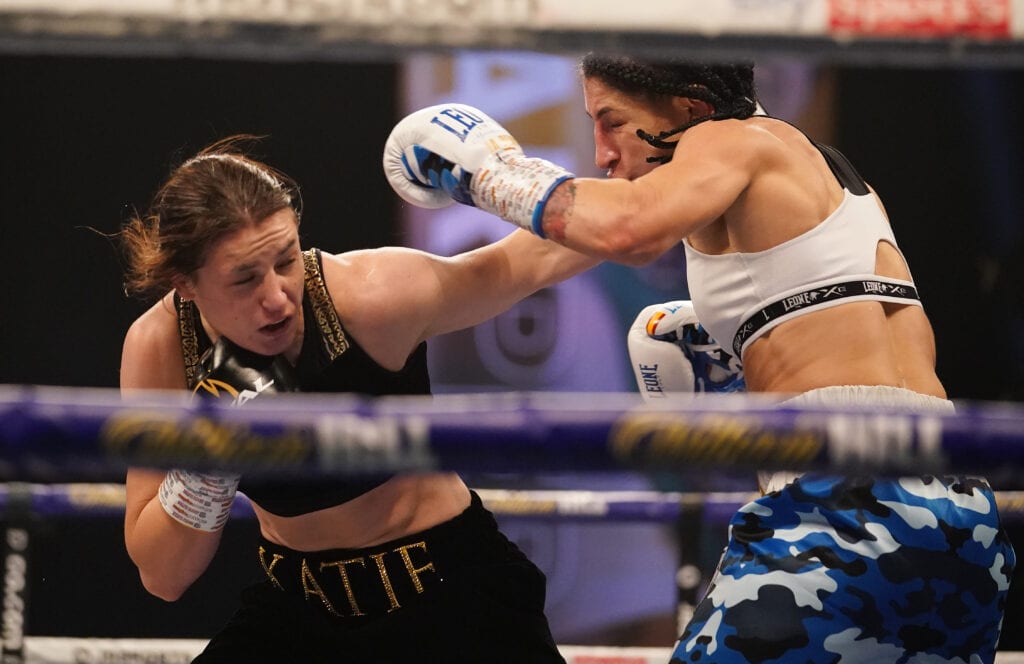 Gutierrez (13-1, 5 KOs) coming into this one was a huge underdog and made her first bout at age 37 outside of her native Spain.  She was greeted at the opening bell with an onslaught from Taylor, backing her into the corner. The broadcast on Sky Sports in the United Kingdom and the streaming service DAZN mentioned that this would be a step up in competition and seemed like only  and a matter of when instead of if she would be stoped in the fight.

Taylor 17-0,6 KOs kept the pressure coming in this one and was able to come in and fire at the head and following up for the opening rounds. The levels between the two showed clearly, and in the third round, Taylor began a flurry that stunned Gutierrez in the early moments but managed to hang on until the end of the round. The hand speed between the two was glaring as when Gutierrez fired one shot, Taylor countered with 3 to 4 punches back.

The fourth round ended with a combination that ended with Gutierrez knocked down as the bell sounded. Gutierrez beat thewhat we all wond count, but once the fifth round started, it didn’t fare any better for her. As the sixth round came ahead it was more of the same and at this point, the referee Robert Smith was paying more attention in this one as it was clear that Gutierrez didn’t have enough answers or ammo to keep up with Taylor.

Give Gutierrez credit as she may have won the seventh on the scorecards but mainly due to the fact it seems that Taylor took the round off.  The final rounds of the fight was more of the same from the begining with Taylor imposing here will throughout.

What’s next for Taylor is what we all wonder. A match with Amanda Serrano would be ideal, but we’ll see.