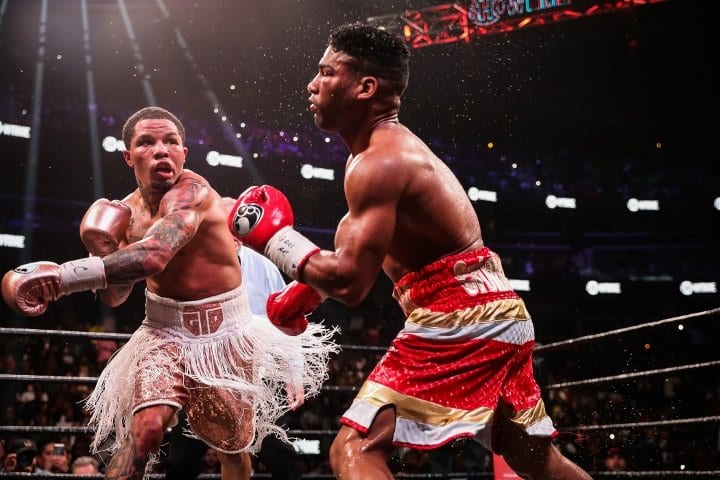 Takeaways from Atlanta for Davis-Gamboa

Had to time to soak in and digest the fight card that took place in Atlanta Saturday night at the State Farm Arena. Me and a reported 14,129 others were on hand for a Showtime Boxing event that by all means was a good one headlined by Gervonta Davis defeating Yuriorkis Gamboa.

In the event you missed the card this past weekend and yours truly at ringside, let me tell you some of my final thoughts from the show.

The crowd got in late like every boxing event ever.

I’ve been reading all weekend from everyone these theories on social media how no one showed up until the main event. Did these folks think a sport that has conditioned it’s fan base for generations to show up late would just change that because it was held in Atlanta? Cute.

The ones that were there started to flock in shortly after 9:30 p.m. ET. If you were watching from home was around Round 3 of the upset of José Uzcátegui by Lionell Thompson. The shift in that crowd showing up was made quicker as many (including Shaquille O’Neal) were coming in from the Peach Bowl blowout happening blocks down the street.

This may have been a homecoming bout for Davis and his new residence in Atlanta but anyone who saw this co-man event were treated to one that is being added and/or being edited into everyone’s Fight of the Year conversations.

The fine folks at All The Best Fights gave this fight in the first sentence recapping the bout,  “close fight but not so exciting”. I’m safe to speculate on my end here and say whoever rated it didn’t watch the fight. My mom who has no interest in the sport whatsoever was entertained by this fight and with good reason, it was a great fight! It had action from start to finish, which is what many casual fans who were there got to witness.

Pascal retained in a narrow decision to the dismay of those in attendance but he said after the fight, “I can finish every round very strong. I’m a strong, pressure fighter. Badou – thanks for the fight. I know the crowd enjoyed the show.”

Atlanta is a viable place for boxing and that is a good thing.

A fight hasn’t came along of this magnitude in Atlanta since Evander Holyfield took on Vaughn Bean back in 1998 at the Georgia Dome. Needless to say after the turnout for this one this past weekend, we’ll see more fight cards in a tow that is building and expanding at almost every corner you take of the 285 within the 20 year layoff.

Announced attendance of 14,129.
About 10,000 of them didn’t show up until the main event lol. It did fill in tho. #DavisGamboa #boxing #monteroonboxing pic.twitter.com/1Vt0NUDx8T