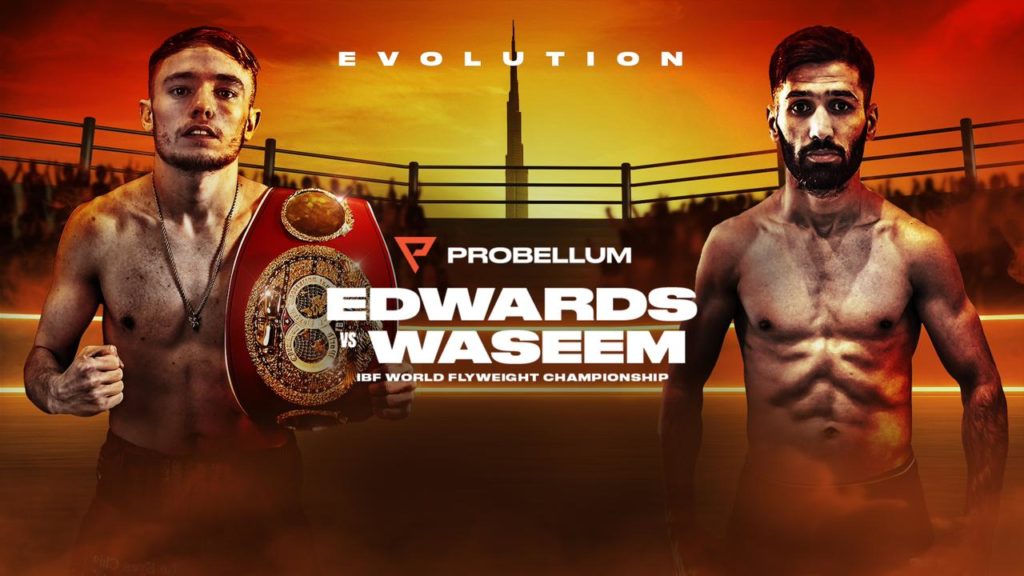 IBF World Flyweight Champion Sunny Edwards says attempts from challenger Muhammad Waseem to ‘play on his ego’ and lure him into a war won’t work. The two met for the final press conference Thursday afternoon in Dubai prior to their 12 round showdown for Edwards’ belt.

The Brit Edwards and Waseem came face-to-face in the Irish Village on Thursday night in front of a boisterous St Patrick’s Day crowd and though the title holder admits to being “a bit arrogant” he is adamant he won’t fall for the Pakistani’s mind games.

“I know their team are banking on trying to draw me out of how I normally box and play to my pride and my ego but that is making it a whole heap worse, because I can go the full 12 rounds and allow for zero shots to land if I want.”

Waseem responded: “Watch the fight and there will be a big upset on Saturday night.  All the talk will be finished.  Viva Pakistan!”

As we wrote previously, Edwards, 17-0, 4KOs, will defend his IBF 112 lb. title for the second time Saturday night against the 12-1 Wasserman at the Dubai Duty Free Tennis Stadium.  He’s just signed a multi-fight deal with Probellum Entertainment, as his new promoter.

Hear more of our analysis of this title bout in the Middle East on the “Big Fight Weekend” podcast with guest Manouk Akopyan of the LA. Times and Boxingscene.com,

It will be Louisiana-native Prograis’ third fight since losing his title in a Jr. Welterweight unification bout to Josh Taylor in October of 2019.

Even though the card is in the Middle East, the events are centered around St. Patrick’s Day for the U.K. (specifically Irish) fans who will be watching on PPV. This is especially for the audience and fans of the popular McKenna.

Prograis, 26-1, 22 KOs, said Thursday, “The fight happened because he was talking trash on online, he was on Twitter and he was talking a load of trash, I was like: ‘Who the hell is this?!’  I found out and that’s why we are here.  He wanted the fight, so we are here.

“If he takes this punishment for 10 rounds, then he’s a tough guy, but at the same time I don’t see him taking it for 10 rounds.”

Meanwhile, McKenna, 22-2-1 replied,  “I see it as I wanted to batter Prograis, I called him out and I got what I wanted.  Everytime I want a fight, I make it happen, I am a self-promoting king.

“This fight on Saturday will be defined by two things: war and brutality.”

The bouts will air on Eurosport TV in Europe and Fubo TV in the U.S.