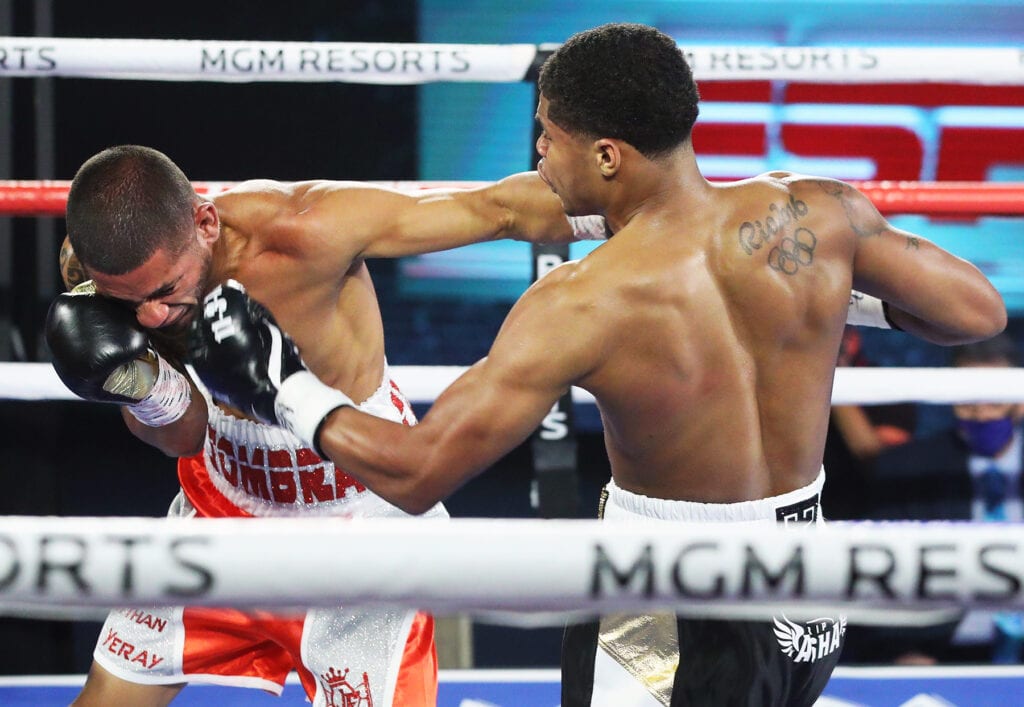 Stevenson blasted out Caraballo in six in Las Vegas

The fight card was important in the United States, as this was the first card put on over the air through ESPN since the Covid 19 pandemic shut down live sports across the world back in March. For Stevenson (14-0, 8 KOs), this was a non-title bout, as he faced Caraballo  (13-2-2, 9 KOs) at 130 pounds.

Caraballo came into this contest a huge underdog and also one that had to make weight on the second go-round. It was put to the test early with a right hook to the body shot sent him down in the first round. From there, it didn’t get any better for him as Stevenson was firing and landing at will.

So much so, that in the third round of the fight analyst, Tim Bradley, stated that “this is target practice” for Stevenson. More evidence was after four rounds of this fight, Stevenson had landed over 50 percent of his power shots, and the barrage of combinations kept coming.

Absolute domination from start to finish for Shakur Stevenson.#TopRankBoxing pic.twitter.com/HNB6uH3TJr

At the start of the sixth round, the broadcast pointed out that in between rounds that Stevenson was shaking his left hand, which usually is the sign of it being injured. Didn’t seem to matter as a body shot at 1:31 in that round had Caraballo on the floor in pain, and referee Tony Weeks signaled this one over.

“I came in to get him out of there and got him out of there,” Stevenson said to ESPN’s Benardo Osuna after the fight, as he was the only reporter at the event ringside as the broadcast team worked remotely due to COVID-19 protocol.

Stevenson’s fight closed out the first of what will be several fight cards over the summer that will air on Top Rank with no fans, in the MGM Grand Performace Center. For Stevenson, we’ll see if he sticks around at 130 or goes back down to 126 lb. to defend his WBO belt from here.

ESPN will use fight announcers at remote locations Tuesday
Hard hitting Navarette back officially June 20th
Advertisement
To Top
We use cookies to ensure that we give you the best experience on our website. If you continue to use this site we will assume that you are happy with it.Ok