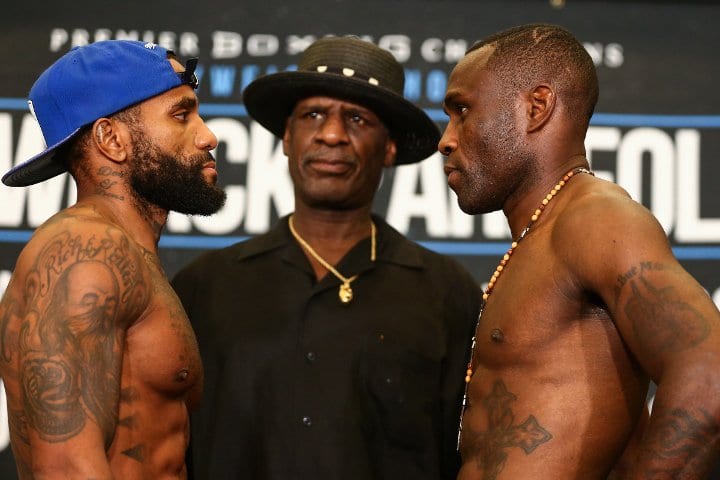 The opening bout this Saturday promises action early as Curtis “Showtime” Stevens is making his debut at the Barclays as well at the new fight weight at 154 pounds taking on Wale Omotoso to lead off the FOX broadcast. Stevens, in the final press conference, mentioned how he is going to give them a glimpse of what the local Brooklyn crowd a sample what he can do.

“This is my first time fighting at Barclays Center, and I’m going to give the fans a taste of what they’ve been missing,” Stevens said in the final press conference.”It’s incredible to have this opportunity to fight at Barclays Center for the first time. It’s going to be a good time for me and all the fans.”

Why will Stevens be interesting? As he said in the final presser, “Nobody calls me out because they know I can punch. I’m too risky for the top fighters because they know there’s a chance they get knocked out.”

.@PBConFOX fighters worked out for the media today at the famed @GleasonsGym in Brooklyn as they prepare for their Saturday night fights at @barclayscenter. #KownackiArreola ?ℹ️: https://t.co/VXrlWu28YY

However, none of this is phasing Omotoso who is expecting a brawl once the bell rings on Saturday.

“He’s a big puncher who brawls. But I’m a big puncher too. He’s been there and fought everybody, but I’m going to show the world what I can do,” Omotoso said at the final press conference.”I think this is going to be a toe-to-toe fight. There might be some feeling out, but as the fight goes on and we get into the middle rounds, it’s going to be fought in the middle of the ring.”

Omotoso didn’t even think the weight difference for Stevens will change the goal in their bout as well.

“I’m not worried about Stevens being at a new weight. I don’t think it’s going to affect him that much. On Saturday, we’re both going to do our best to get the win.”

In a fight that was a last-minute replacement on television for the injured Andre Berto, you can’t go wrong with these two willing to mix it up Saturday night.