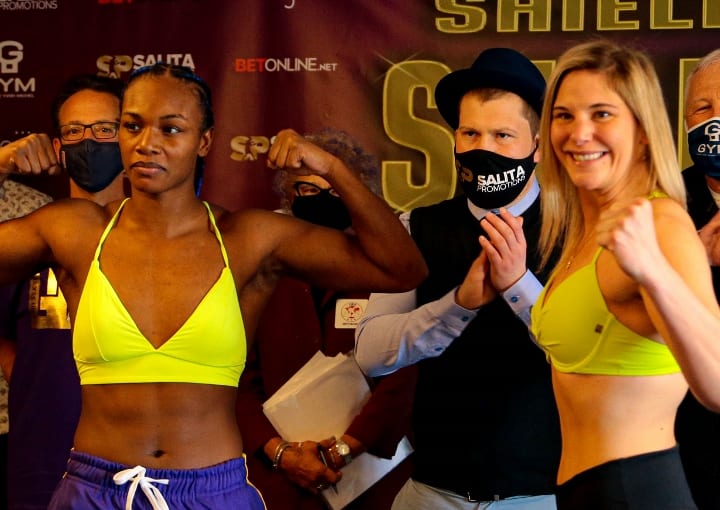 Claressa Shields became undisputed at 154. She made it look easy to a wide unanimous decision win over Marie-Eve Dicaire to close out the Dort FInanical Center in Flint, MI, on Friday night.

The judge’s scorecards for this fight were 100-90 by all three in a fight that once the bell rang showed that the two were levels apart.

With this win, Shields (11-0, 2 KOs) becomes the first boxer in the four-belt era to become undisputed world champion in two weight divisions.

The fight started as Shields stood in the center of the ring while the southpaw Dicaire was working off her back foot. The movement of Shields made for her an easy night as she was able to land rights into the back-peddling of Dicaire through all ten rounds. Dicaire (17-1) came into this fight being the underdog and wasn’t able to get anything going at all as the fight went on.

This pattern seemed to continue as the fight went on, it was all Shields who was able to anticipate and land whenever and often while Dicaire was still looking to counter.

This win in the ring for Shields was an easy one, and we’ll see when she is back into the ring next for boxing. Shields mentioned that she’d be competing in the PFL, a mixed martial arts league that starts up in April. Once that is done for her, we’ll see if she stays at 154 or moves down to 147 pounds in a chance to take on the winner of the grudge match between Jessica McCaskill and Cecila Breakhus taking place next week.