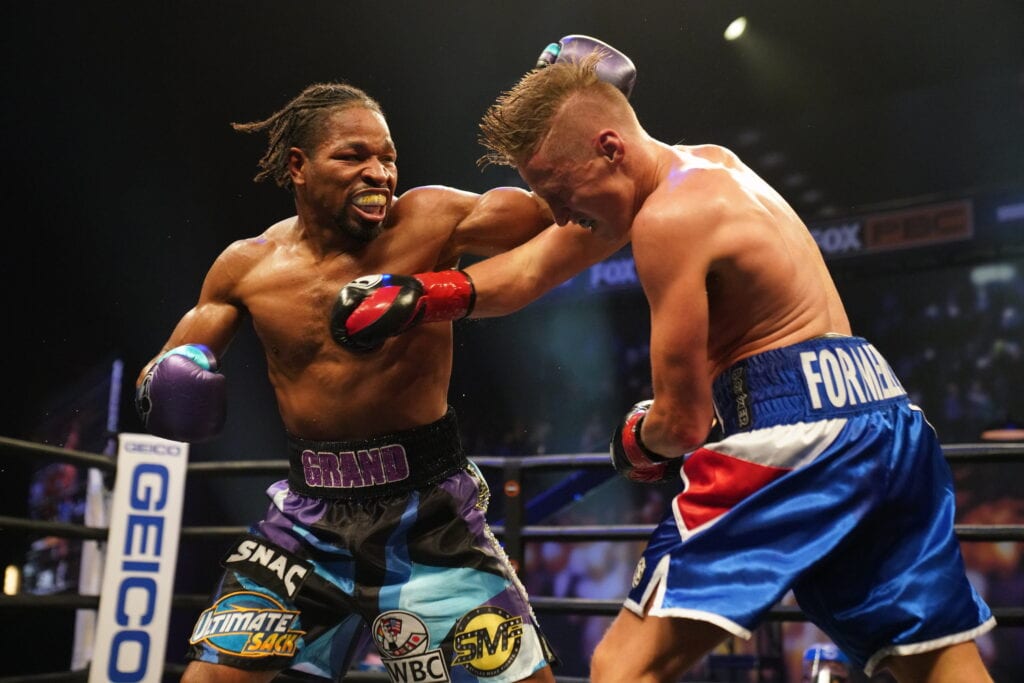 Appearing live in person on the five day a week, “TC Martin Show” at the Cosmopolitan Hotel on the Vegas Strip (and with the author sitting five feet from the discussion), Porter told Martin about the latest with the proposed bout with “Bud” Crawford,

Glad to have a couple of champs in the house today. Well, one is a real champ and the other just roots for them 😂 My guys @ShowtimeShawnP @BucSidelineGuy @Cosmopolitan_LV https://t.co/zbp77fAANS pic.twitter.com/je94y3MLBp

If anyone wants us to fight (he and Crawford) let’s come together and do that.”

Meanwhile, no one is quite sure what will happen next with Crawford’s next fight?

However, as we wrote last week, it appears that Crawford and his relationship with promoter Bob Arum/Top Rank Boxing is headed for one final fight and then, divorce. The 33 year old Crawford has been particularly unhappy for over a year that Arum could not make a mega-fight happen for him at Welterweight.

Specifically, he has wanted to fight with WBC/IBF Welterweight Champion, Errol Spence.

But, despite all of Arum’s grandstanding and predictions about being able to make that fight happen, Premier Boxing Champions, who handles Spence, has refused to cooperate with any of their prominent fighters (including to this point, Porter) fighting Crawford.

Then, in order to appease Crawford last Fall, Arum had even put in a stipulation that if he did not secure a bout with Spence for Crawford before the end of 2020, Crawford would get a one million dollar bonus. Crawford obviously collected on that, as 2020 came to a conclusion, and there still was no fight with Spence.

Things got so contentious that after Crawford’s lawyer sent a letter to Top Rank about his displeasure with opponents and then, his family publicly criticized Arum, the 89 year old promoter blasted back in February, saying to Rafael then,

I don’t give a sh-t,” Arum told the site. “I don’t care because what (the Crawford camp) did was reprehensible. The lawyer sent a letter to us. OK, that’s fine. That’s what lawyers do. But you don’t release it to the press. All of this should have been behind closed doors like what men do. I’m not going to take this sh-t. I’m just not going to do it, because the truth is I’ve lost money with this guy.”

Arum went on to say in another interview with Boxingscene.com,

“It will be (another Crawford promotion) another hit on my net worth,” Arum said. “I’m being serious. I turned the whole project of Crawford over to (Top Rank president and Arum stepson) Todd (duBoef). I washed my hands of it. I’m too emotional about it. There was this last kerfuffle with the Brook fight when he didn’t sign the contracts so we couldn’t promote on (the) Lomachenko-Lopez (telecast). I have long since departed working with Crawford.”

While there’s no question that the 37-0, 28 KOs Crawford is one of the most talented fighters from the Junior Welterweight and Welterweight divisions over the last decade, there’s also be no doubt that he’s basically fought average competition over the course of his last three fights. Those were against Amir Khan (who had already lost three times), little known “Mean Machine” Egidijus Kavaliauskas and then, the fight with Brook who had already been beaten years earlier by Spence.

It is believed that the Omaha, Nebraska native will be sought after by PBC to do a multi-fight deal, where the likes of the Spence – Pacquiao winner, plus other former world title fighters like Porter, Keith Thurman and Yordenis Ugas, etc. are waiting.

Back to the 31-3-1 Porter and what he revealed Tuesday about the discussions he’s had with Crawford,

“It went from a conversation we had in probably July of last year after boxing got back going and everything began to slow down with the pandemic… I said, ‘Hey, what do you think?’ He (Crawford) said, I’m working on something big. I said go ahead and do what you gotta do.”

As we know, that was an attempt for Crawford to fight Spence, and it didn’t happen.

Porter said Tuesday he has told Crawford he wants the fight this Fall, and,

Now, we wait for what Crawford wants to do, next.