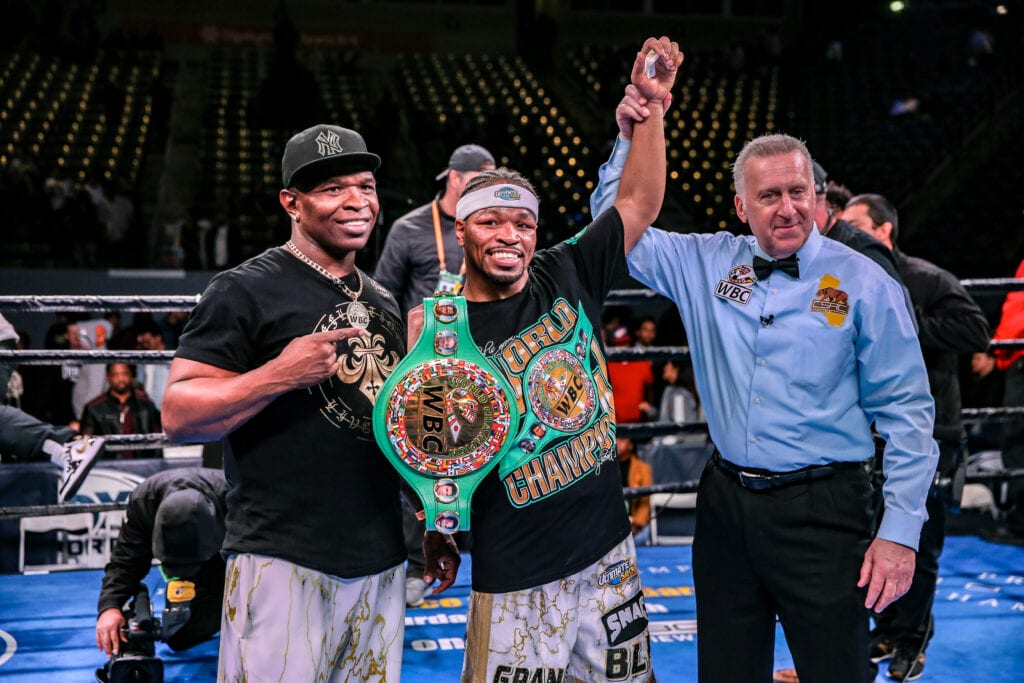 The next featured Fighter for PBC series on Fox Sports will be a former World Welterweight Champ, Shawn Porter. And he knows that he’s got a very good shot of getting back into the big picture and lucrative paydays.

Porter with a guest during Saturday night’s restart for “PBC on Fox” with their first fight card on the network since March. In a video conference interview with host / play-by-play man, Brian Kenny, Porter made clear that is August 22nd fight is a stepping stone:

"Right now anybody can be a champion at any time." 💯@ShowtimeShawnP breaks down the loaded Welterweight division pic.twitter.com/3AhMlEkodn

“We’ll see. I know that this fight is going to be for a title eliminator. And, as soon as we know what our next move is for after this fight, then, we’ll go for it,”

Porter continued, “the Welterweight division is the most loaded in terms of competition in boxing. And, I think right now, that anybody can a champion at anytime.”

First, Porter, Porter, 30-3-1, will take on little-known unbeaten (20-0) young, German Sebastian Formella in the main event on the Fox broadcast from the Microsoft theater in downtown L.A.

If Porter were to be successful and look impressive, it would seemingly pave the way for his camp and PBC to both pursue a rematch with Unified 147 lb champ, Errol Spence. It was also announced during Saturday night’s Fox broadcast that Spence is officially fighting contender and former Junior Welterweight World Champ, Danny Garcia, on a Fox Pay-per-view November 21st.

Porter and Spence fought a hotly-contested 12-round battle in September last year in L.A., where Spence. scored the decision win and captured Porter’s WBC belt to add to his IBF Welterweight title.

It remains to be seen if PBC’s ultimate goal is to have a Porter-Spence rematch, or if they might be angling for a Spence-Manny Pacquiao mega, Pay-per-view probably somewhere around March or April next year?

That would give time for Spence to recover after the Garcia fight, depending on how it goes. And, Pacquiao is currently involved in the Filipino Political Senate this fall and likely wouldn’t be available to fight until at least January, anyway.

The future Hall of Famer Pacaquiao was last in the ring 13 months ago in a decision win over previously unbeaten WBA World champion, Keith Thurman. Pacquiao, who is 42 years old, obviously doesn’t have time on his side to wait much beyond the middle of next year to start fighting again.

Now, we wait for Porter first, then Spence to fight and see who gets what bout/next in early 2021?