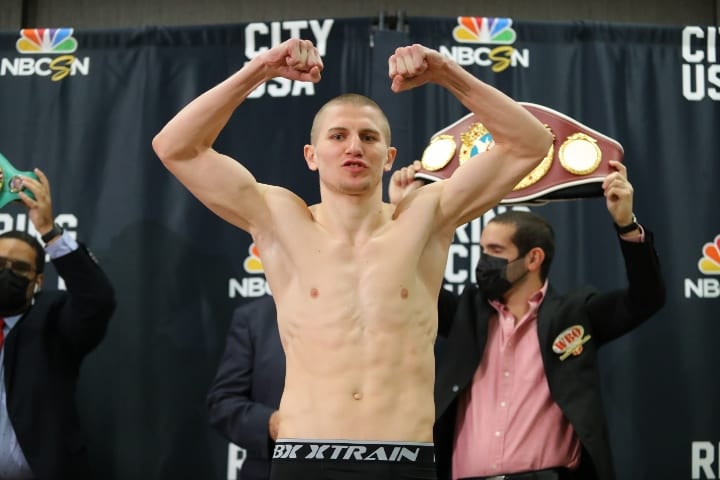 Following a first-round knockout of Brandon Baue on July 17, 2021, the 26-year-old Ukrainian Bohachuk, trained by the renowned Manny Robles, looks to stay in the win column against the upset-minded Texan. Bohachuk was last seen most notably on a “Ring City USA” show, where he was stopped by Brandon Adams in a firefight. The 28-year-old Igbokwe is riding a three-bout winning streak, most recently knocking out Juan Carlos Rodriguez in the third round on January 30, 2021, in Heredia, Costa Rica. Bohachuk is currently ranked #13 by the World Boxing Council.

“We are excited to have so many quality fights on the Hollywood Fight Nights show on September 16,” said Loeffler. “We’ve had a tremendous reaction from the fans and media to this event. Quiet Cannon will provide a scenic location and a great atmosphere for this show. There is a great mix of world-class fighters and local fighters, which will provide a full night of entertaining fights. We look forward to working with UFC Fight Pass, who will broadcast the show and want to acknowledge Roy Jones Jr Boxing and World Cup of Boxing.”

Co-featured, Ali Akhmedov, (16-1, 12 KO’s), training out of Los Angeles, CA with Gennadiy ‘GGG’ Golovkin and promoted by GGG Promotions clashes with David Zegarra, (34-5, 21 KOs), of Lima, Peru, currently training in Mexico City, in an eight-round light heavyweight bout. A native of Almaty, Kazakhstan, and guided by acclaimed trainer Johnathon Banks, the 26-year-old Akhmedov looks to get back into the win column following a hotly contested battle with Carlos Gongora on December 18, 2020. The battle-tested Zegarra also looks to return to the win column after a tough loss to former world champion David Lemieux.

In the light-heavyweight division over eight rounds, Rafayel Simonyan (9-1, 8 KOs), of Vanadzor, Armenia, faces Adrian ‘Montu-Ra’ Taylor, (11-1, 4 KOs), of Dallas, TX. The 27-year-old Simonyan, trained by the world-famous Abel Sanchez, returns to action after a disputed loss via an eight-round majority decision to Abraham Tebes on March 5, 2021, in Kissimmee, FL. Taylor heads into the clash with Simonyan riding a four-bout winning streak, lastly winning a unanimous decision over German Perez on December 21, 2019.

Fighting in the super featherweight division in a battle of top undefeated local prospects, Adrian ‘Bam Bam’ Corona (7-0, 1 KOs) of Rialto, CA battles Daniel ‘The Dawg’ Robles (7-0-1, 5 KOs), scheduled for six rounds. A staple at Hollywood Fight Nights and trained by the legendary Ben Lira, Corona hits the ring for the first time since October 27, 2019. He was victorious with a unanimous decision over Emmanuel Castro. Fighting for the fifth time in 2021, the busy Robles returns after a first-round knockout of Jahir Everson on August 6, 2021.

Trained by Hall of Famer Freddie Roach, light heavyweight Marco Deckmann (5-1, 4 KOs), of North Hollywood, CA, will fight in a scheduled six-rounder against Alejandro ‘Mexique’ Fugon (3-0-1, 3 KOs) of Palmdale, CA. Deckmann comes off a first-round knockout of Juan Antonio Lopez Fonseca on June 5, 2021, while Fugon looks to bounce back into the win column following a split draw with Gerardo Aldama Cuevas on July 31, 2021.

Elvina ‘Warrior’ White (5-0, 2 KOs) of Los Angeles, CA, battles Chelsey Anderson (3-0, 1KOs) in a battle of locally-based undefeated female lightweights of Yorba Linda, CA, in a four-rounder. A native of Austria, White heads into battle after a fourth-round knockout of Katarina Vistica on December 12, 2020, in Germany. Anderson returns to action following a unanimous decision over Anyela Lopez on December 6, 2019, in Phoenix, AZ.

In the super featherweight division, Eric Mondragon (3-0-1, 2 KOs) of Maywood, CA, will battle an opponent named in a four-rounder. The 22-year-old Mondragon looks to return to the win column following a majority draw on June 11, 2020, against Mike Danny Sanchez in Las Vegas, NV.