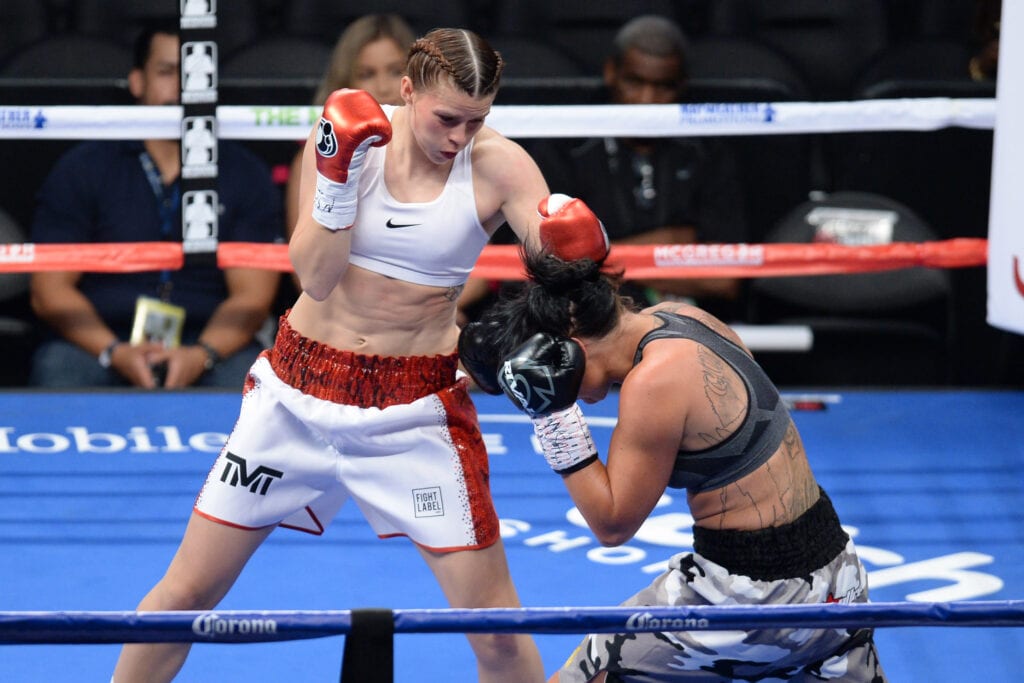 The undefeated Hartlepool fighter (6-0, 4 KOs), who is trained by Peter Fury, has coasted to six straight wins since proclaiming herself in the professional ranks on the Floyd Mayweather vs. Conor McGregor card at the T-Mobile Arena in Las Vegas in 2017.

Here she is on her debut, 2 years ago in Vegas on the Mayweather-McGregor undercard

She was last in action against Borislava Goranova in one round at Victoria Warehouse back in May and believes her linking up with Matchroom Boxing will provide her with the perfect platform to potentially secure a mega-fight will long-term rival Shields.

“I couldn’t be happier to announce I’m teaming up with Matchroom Boxing and Sky Sports, alongside my team mate Hughie Fury and many other great fighters,” said Marshall to the media. “I am blessed to be back working with Adam Smith who mentored me though my achievements in Team GB. I’d like to thank my coach Peter Fury, Mick Hennessy, Eddie Hearn not forgetting MTK for making this dream a reality. With this platform, I aim to show the boxing World another level to female boxing.”

“I’m delighted to welcome Savannah to the team, it’s another great signing,” said Eddie Hearn in a press release. “I watched Savannah in the GB squad where she was an exceptional amateur winning Gold in the first-ever Women’s World Championships and also represented GB in the 2012 Olympic Games. As a pro she has been faultless and is almost ready to take her shot at a World title. There are some great fights out there for her, particularly Claressa Shields, who she defeated as an amateur. Claressa has been a driving force behind the women’s game and a rematch between the two would be great to watch.”

Adam Smith, Head of Sky Sports Boxing, said in a press release: “We’re absolutely delighted that the next stage of Savannah Marshall’s exciting career will be shown on Sky Sports. I know Savannah well, she was a Sky Sports Scholar for four years, and she’s a fantastic talent.

“Savannah now has a perfect platform to showcase her skills with Sky Sports and Matchroom Boxing. Eddie has already guided Katie Taylor to undisputed World title glory – and now we’ll also be following Savannah’s rise towards a World title fight.”