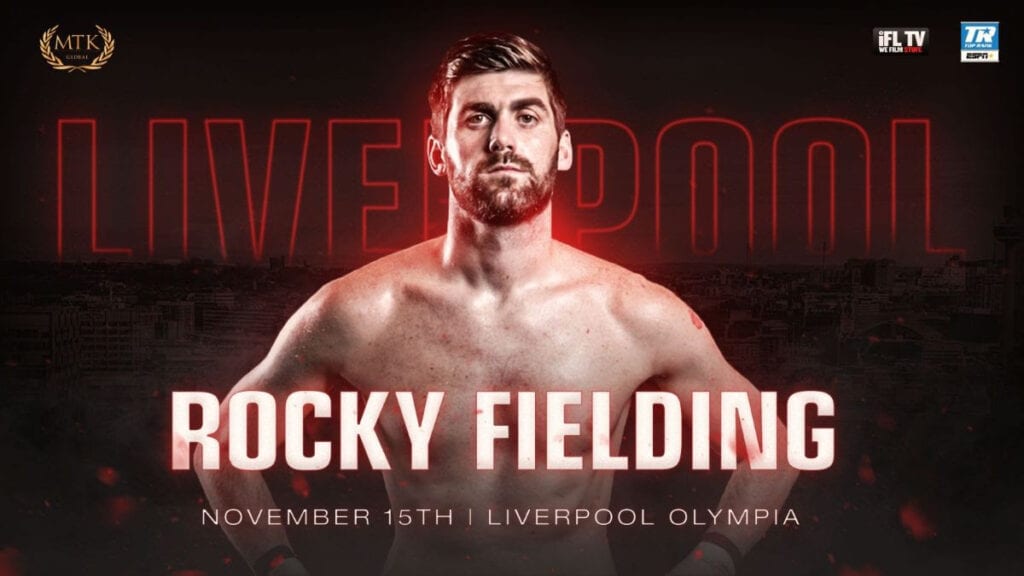 Rocky Fielding returns to the ring in Liverpool

Former world champion Rocky Fielding will make his long-awaited return from his clash with ‘Canelo’ on an #MTKFightNight in Liverpool on November 15.  Fielding’s comeback match was originally scheduled back on for July 12, but an injury delayed his return.

The popular 32-year-old (27-2, 15 KOs) has shrugged off a recent injury and is eager to kickstart a swift rise back to world title contention at Liverpool’s Olympia – live on ESPN+ in the United States in association with Top Rank and on iFL TV worldwide.

@Rocky87Fielding with his oil which will help him through his training camp for his next fight on November 15th.
Perfect for his rest and recovery to help him train harder 👊💥 #NoMoreAchesAndPains #SleepBetter #FeelBetter #CBD #HempOil #3LittleBirds #DontWorry 🇯🇲🙏🇯🇲 pic.twitter.com/tQ1PenqrV9

In 2015, the unbeaten Fielding at the time faced off against Callum Smith, who beaten Fielding in quick fashion to win the vacant British super-middleweight title, downing Fielding three times and winning in just 2:45.

But Fielding came back from that, knocking off John Ryder in 2017 to win the again vacant British belt, and then upsetting Tyron Zeuge in Germany in July of last year to win the WBA’s secondary “world” title. That landed him the fight with Alvarez in New York, and Canelo laid waste to Fielding, putting him down four times.

Fielding said: “I can’t wait to be back in there. I’ve been off since December and I’ve been itching to get fighting again for a while.

“I’m 100% confident my team can get me another world title shot because since I signed with MTK Global, they’ve delivered everything they should they would.

“My dreams have come true in becoming a British and world champion but now I want to get a win under my belt in my next fight and then any big names or world champions who want a defence can get on the phone.

“I’m going to get back to what won me the British and world titles and that’s boxing clever and staying concentrated. I’m looking forward to it.”

Fielding claimed the WBA world super-middleweight crown with a stunning stoppage of Tyron Zeuge in Germany last July and then stepped in against Mexican great ‘Canelo’ at New York’s Madison Square Garden.