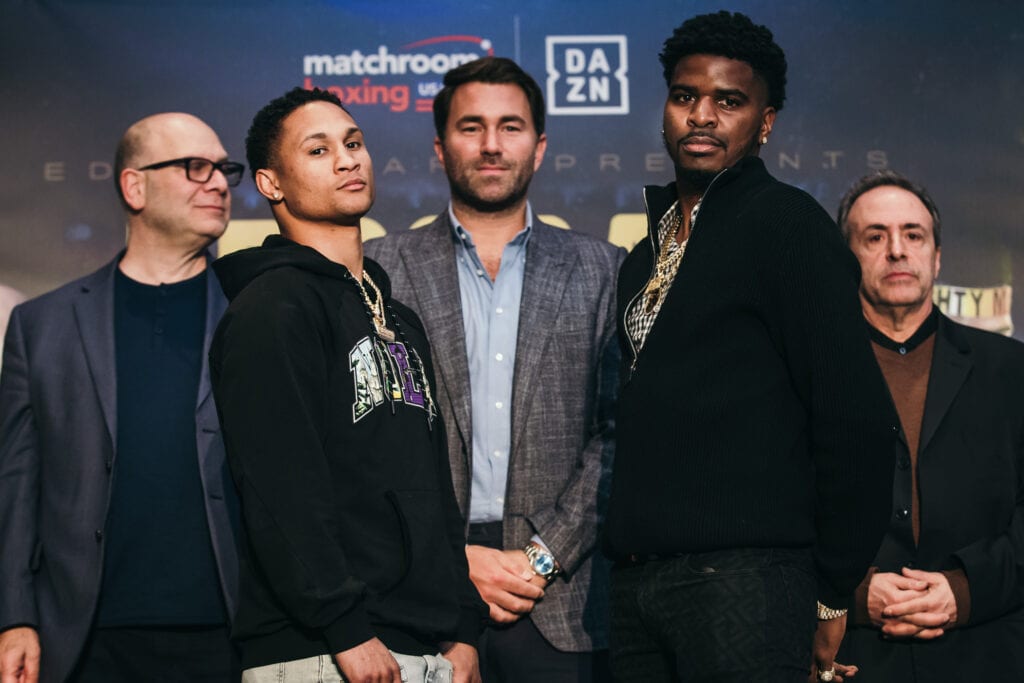 Report- Prograis-Hooker back on in July?

Tonight would have been the original night for the scheduled Matchroom Boxing card, which was to be headlined by Regis Prograis taking on Maurice Hooker out in Oxon Hill, Maryland. I was excited about the Fight and would’ve been there, but the match was scrapped due to the Coronavirus pandemic.

Dont want to ruin anyone's Friday, but today was supposed to be Regis Prograis-Maurice Hooker… #boxing

Dan Rafael, still tweeting with ESPN attached to his name for the time being wrote this afternoon that the fight is looking to be rescheduled for July.

Rafael tweeted: “While the #boxing schedule remains in limbo, like all of sports, because of the coronavirus pandemic, sources tell me @MatchroomBoxing is aiming to reschedule the
@RPrograis-@mightymohooker card on @DAZN_USA
DAZN for July behind closed doors, possibly at a venue in Tulsa, Okla.”

While the #boxing schedule remains in limbo, like all of sports, because of the coronavirus pandemic, sources tell me @MatchroomBoxing is aiming to reschedule the @RPrograis–@mightymohooker card on @DAZN_USA DAZN for July behind closed doors, possibly at a venue in Tulsa, Okla.

The notion has been floated around across the country about slowly easing back into having live sporting events back in full swing. Boxing, like all other live sporting events, would present a studio type boxing show, which would only contain essential personnel for the interim. At the same time, the United States regroups from the effects of COVID-19 still taking place.

The contest, if it reportedly back on, would air on the streaming service DAZN, which as of this writing, could use all the live programming it can get as subscribers have left in droves due to the pandemic and has been cutting staff because of it.

For the Fight itself, both fighters themselves were both in Fight of the Year candidates last year, both on the wrong end.   Prograis (24-1 20 KOs) last October took on Josh Taylor in a 140 lb. unification clash and the final of the World Boxing Super Series, which he lost by unanimous decision.  Hooker  (27-1-3 18 KOs) was involved in a firefight last July in Frisco, where he traded blows with Jose Ramirez in their unification bout before being stopped in the sixth round.

The pending matchup is a classic crossroads fight with both at 140 looking to get back into the mix for a title, and we’ll see if this holds, they’ll both do it in the ring without fans.

Or at least telling Regis.

Prograis tweeted out that if this fight is happening, he’d like to know.

I hope the sources let me know what’s going on too because I haven’t heard anything https://t.co/DkvvXmgDe8

And, Matchroom Boxing promoter Eddie Hearn chimed in on that tweet as thread. Hearn said, “Hang fire guys no truth in that, can’t say Tulsa is on the radar!”

So this may not be in July after all.

Time will tell if any of this all shakes out.

Veteran American referee Cotton dead from COVID-19
Golden Boy Pres acknowledged Canelo may fight Golovkin next
Advertisement
To Top
We use cookies to ensure that we give you the best experience on our website. If you continue to use this site we will assume that you are happy with it.Ok