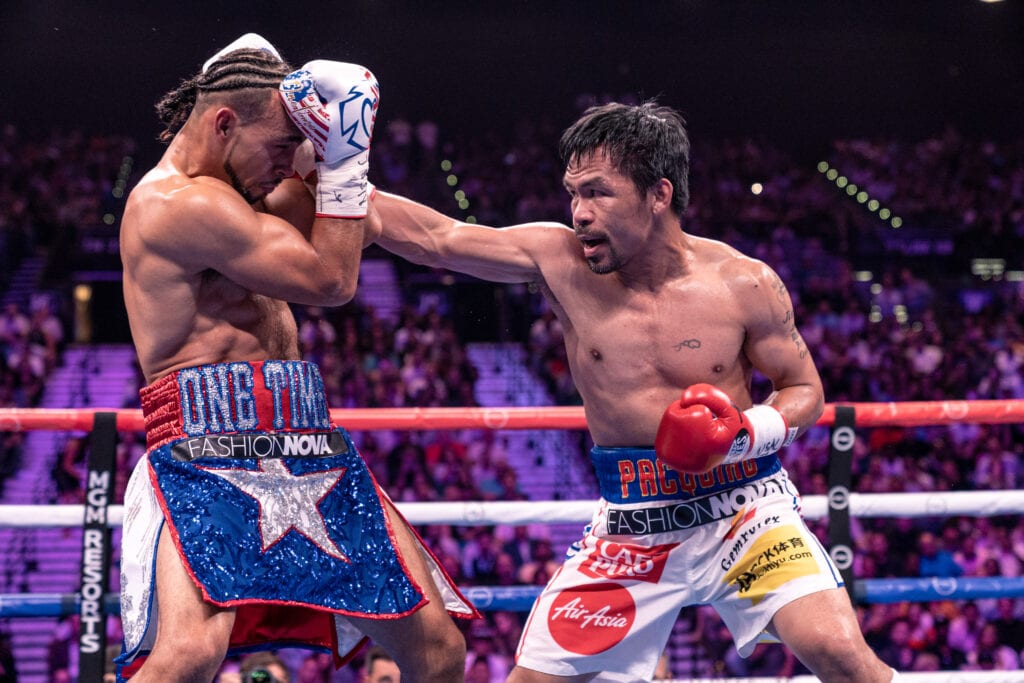 There’s been uncertainty for over a year on future Hall of Famer Manny Pacquiao’s next bout. However, it appears talks have intensified for a possible mega-battle with Terence Crawford later this Summer.

The Athletic reported Tuesday afternoon that the WBA World Welterweight “champion in recess” Pacquiao has talks progressing towards the fight with the unbeaten WBO 147 lb. star Crawford to fight in the Middle East,

Sources: Top Rank has informed ESPN and PPV distributor In Demand that it’s exploring a June 5 fight in Abu Dhabi between welterweight champ Terence Crawford and Manny Pacquiao. There’s no deal yet, but it’s contingent on the fight happening in Abu Dhabihttps://t.co/i8izJZGfR9

This is not the first time that a proposed Pacquiao-Crawford bout has been publicized. In fact, after Crawford’s last bout, a ho-hum title defense ending in a 4th round TKO with England’s Kell Brook in November, promoter Bob Arum talked openly about wanting it to be his fighter’s next bout.

That’s because there’s been some serious discontent from the 33 year old unbeaten Crawford about his opponents and lack of a big time PPV style fight, as his deal with Top Rank Boxing is running out later this year.

And, it has stemmed from Arum being unable get a bout with with Unified Welterweight Champ, Errol Spence or  Pacquiao to  materialize for the last 18 months. As things escalated, Crawford had his lawyer write a letter to Arum about the disappointment with opponent options and wanting to end their long term deal.

As for Crawford’s comments after the Brook win in November, ESPN’s Benardo Osuna asked him who he wanted next? Crawford looked with a smirk on his face to Arum next to him to answer. And, the now 89 year old Top Rank promoter made it clear that they had had a deal earlier in the Fall to have a huge PPV fight with Pacquiao saying then,

“The money was there. It had been committed. It was a fight that was going to take place in a country in the Mid-East (reportedly Qatar). And then the Minister of Health in that country said ‘you can’t do it,’ because I can’t guarantee that we’ll allow spectators (due to Covid 19 increasing worldwide).

Now, they’ve called us and said, if Terence is successful, we want to resume the talks in the Spring, either before or after Ramadan (Muslim holy holidays).”

Pacquiao reportedly had agreed to the outrageous guarantee of $23.5 million and you would believe that Crawford would have gotten a guarantee of at least 2/3 of that. Thus, the highest payday of his career.

Later that night, Crawford now 37-0, went on to say about the proposed Pacquiao mega-PPV,

“I already said who I want {next}. I want Pacquiao,” Crawford said. “I want to revisit that fight. That was a fight that should’ve happened right now. But being that the pandemic happened, and they weren’t going to allow fans in the Middle East, they had to put a hold to that. Everything was 95 percent done. We had a venue. The money was almost there. It wasn’t quite there. That was the only thing we were waiting on.”

Still, we have reported from two different sources within Premier Boxing Champions and with understanding of Pacquiao’s original deal with them over two years ago, that he signed a two fight promotional deal with them and at least one more fight, as their option.

The seven division World Champ is now 62-7-2 and he defeated Adrian Broner by decision in the first fight of that deal in January of 2019. He then took the WBA World title off Keith Thurman with a stirring 12 round performance in July of that year.

However, due to the Covid 19 pandemic beginning in March of 2020, he hasn’t fought now in over a year and a half.

There’s been speculation that a Pacquiao-Thurman fight would happen, once fans could be allowed to attend. However, months have gone by without the rematch materializing.

So, in the end, is this Arum trying one last time to save face and keep the frustrated Crawford by working out the fight with Pacquiao?

Is it entirely likely that PBC is standing in the way of him trying to make a deal with the fighter that he formerly promoted for over 10 years, because it’s not in their interest and they have an option on Pacquiao’s next fight?

Now, we wait for more to materialize beyond just the “talks continue” for Pacquiao-Crawford to become reality.