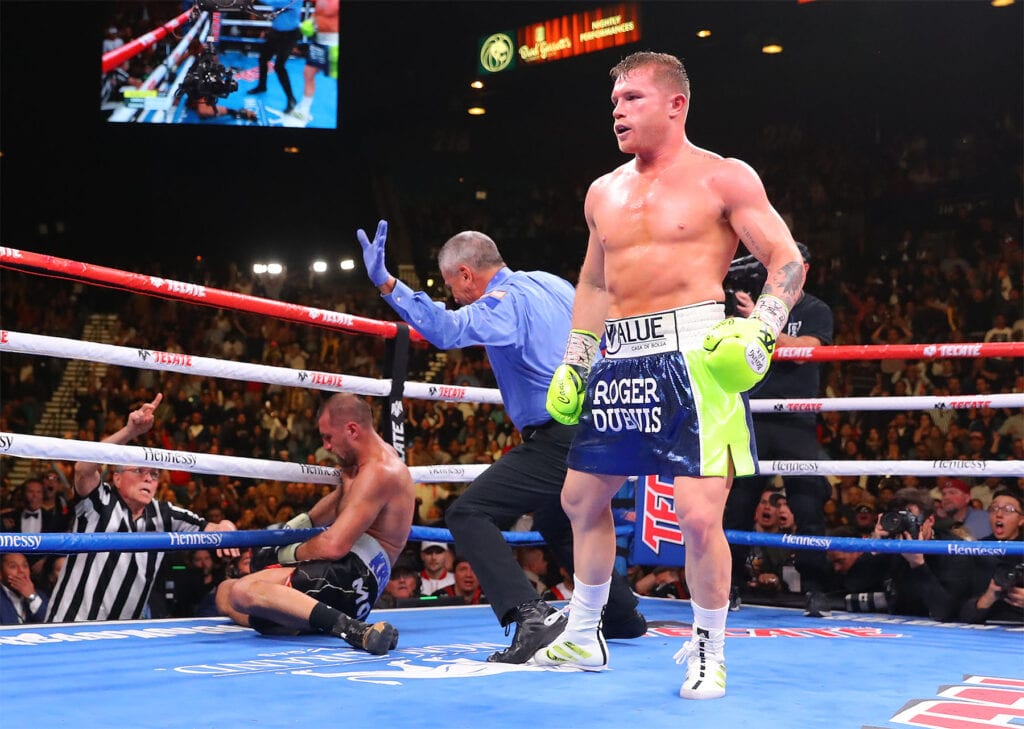 It’s been a big week of news and announcements for the DAZN streaming service based in the United States, and now, comes a report they’ve ramped up their efforts to secure better opposition and a timeline for “Canelo” Alvarez’s next three fights.

DAZN Seeks to Lock in Canelo vs Golovkin https://t.co/4o6A39XMzC pic.twitter.com/XZZ7BzPwTI

In that meeting Hauser learned that DAZN not only wants to announce soon the long-rumored Canelo-Billy Joe Saunders fight for May 2nd fight in Las Vegas, but that they also want his next fight to be the third in a Trilogy with Gennady Golovkin. And, that fight would reportedly in September.

The Canelo vs. Saunders (unbeaten WBO 168 lb. champ) matchup has been discussed for two months. And, DAZ did announce on Monday that Canelo will be fighting on May 2nd with the speculation is that will be against Saunders and in Las Vegas. This is because of numerous previously successful Cinco de Mayo weekend promotions, including with Caenelo, for Mexican fighters in Vegas on that weekend.

The streaming service also announced Monday that they are expanding from nine to 200 countries this year, and they will active pursue NFL play by play streaming rights over the next two years.

When DAZN signed Canelo in 2018 to an historic 11 fight deal in launching their service, the big part of their motivation was to get a third fight with Alvarez and “Triple G.” Hauser reports that a date being discussed is September 12th, potentially back in Las Vegas or maybe even at AT&T Stadium, the home of the Dallas Cowboys, in Arlington, Texas.

Alvarez and Golovkin fought to a draw in their first fight in September of 2018 and then Canelo handed Golovkin his first professional loss in a hotly contested 12-round decision 12 months later.

Triple G is slated to defend his IBF version of the 160 lb. title later this spring, but the fight is currently delayed because he suffered a calf injury in training.

Also from the Boxingscene.com story is the report that Japanese WBA “regular” Middleweight champion Ryota Murata is also on the radar for a potential December fight or maybe, in early 2021.

There had been speculation that Alvarez would go to Japan and fight Murata on the May 2nd date. However, that fight doesn’t make as much sense, financially, for that date, as Alvarez fighting in Vegas does.

Also, the fact that Skipper was apparently meeting directly with Canelo ,and without his promoter Oscar De La Hoya, further emphasizes the icy relationship that still exists between Canelo and the Hall of Fame fighter who promotes him.

That’s because Canelo got stripped of the IBF version of his Undisputed championship (that Golovkin now has), when Golden Boy promotions could not secure an opponent within the IBF time frame last summer. And, then instead of a September fight, DAZN had to wait two extra months for Canelo’s next fight.

That was against Sergey Kovalev for his WBO Light Heavyweight title in November. Alvarez won that fight (above) by TKO, but is not expected to compete any longer at Light Heavyweight. He will most likely continue to fight at either middleweight or super-middleweight.

Now, we wait for the presumed announcement to come shortly about Saunders and then, maybe officially, about a Golovkin fight in the fall.

Martinez eyes fights with Estrada, Chocolatito
Whyte is taking on Povetkin due to Ruiz rejecting
Advertisement
To Top
We use cookies to ensure that we give you the best experience on our website. If you continue to use this site we will assume that you are happy with it.OkPrivacy policy