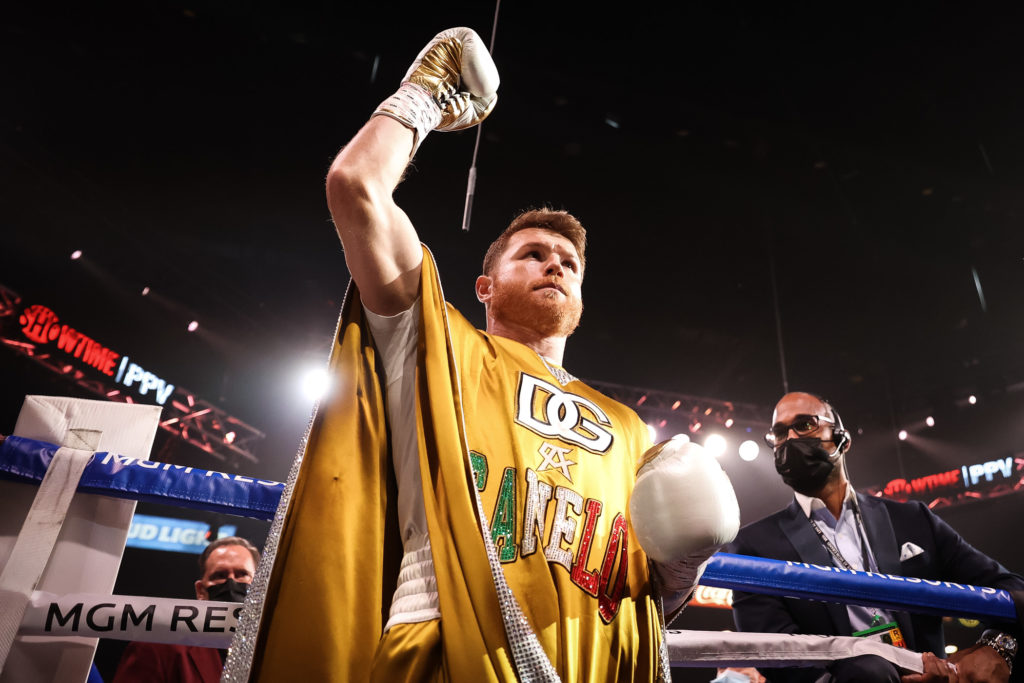 The saga of which promotional partner future Hall of Famer Canelo Alvarez will choose to go with for his next fight continues. And, a report out Wednesday says that he’s considering a two fight deal with Matchroom Boxing that could see him end up facing (stop us, if you’ve read this before) former nemesis Gennady Golovkin as the second fight.

ESPN Boxing insider Mike Coppinger reported that the Undisputed Super Middleweight champ Alvarez has a proposal in front of him to face unbeaten WBA Light Heavyweight Champ, Russian Dimitry Bivol in Las Vegas in May. And, then, he would meet “Triple G” this Fall in a trilogy battle,

Sources: Canelo Alvarez & Eddie Hearn are closing in on a two-fight deal for the star’s return to DAZN.

No agreement yet; Canelo & GGG both must win.https://t.co/6HIQwO6KHk

Coppinger wrote on the proposal,

Alvarez, 57-1-2, and Eddie Hearn’s Matchroom Boxing are closing in on a two-fight deal worth upward of $85 million for boxing’s top star to compete on DAZN, sources told ESPN. The first fight would pit Alvarez against light heavyweight titleholder Dmitry Bivol on May 7 in a return to 175 pounds.

Provided Alvarez wins, as expected, he would defend his undisputed 168-pound championship against GGG in a long-awaited grudge match Sept. 17, per sources.

Golovkin (41-1-1, 36 KOs) will first meet Ryota Murata in a rescheduled 160-pound title unification in the spring in Tokyo, and, like Alvarez, will have to emerge victorious to keep the third fight intact.

The deal has not been agreed to nor signed yet, sources said, but negotiations are approaching the finish line.

While Coppinger has his report, it should be noted that there have also been other reports and Big Fight Weekend has a source with Premier Boxing Champions that all say Alvarez is close to finalizing with WBC Middleweight Champion Jermall Charlo next in May. Charlo will move up to 168 lb. to fight Canelo for his titles on “Cinco De Mayo” weekend with a more lucrative pay per view exclusive through PBC and Alvarez also maintaining the PPV rights to the Mexican television market.

This was there setup for the PBC led Canelo-Caleb Plant battle last November, where Alvarez was guaranteed over $40 million plus the greater share of all of the PPV through Showtime in the U.S. and other providers in Mexico. He defeated Plant by TKO to become Undisputed 168 lb. champ.

Bivol, 19-0, is promoted by Matchroom/Hearn, and has been waiting in the wings for a massive fight/payday. However, he’s not a significant draw in the United States- certainly not like Charlo, who’s fought repeatedly as the main event fighter on PBC/Fox Sports shows and PBC pay per views for the last five years.

Charlo, 31-0, 22 KOs, is eager to move up to Super Middleweight and fight the biggest bout and payday of his career. He’s defended his WBC Middleweight title four times, including his most recent win in his hometown of Houston, TX, when he decisioned Juan Montiel last last June.

It should also be noted that Coppinger has repeatedly reported in the past that Alvarez would likely fight Golovkin as his next fight, only to not have that happen. Alavarez and Triple G fought to a draw in September 2017 and then, Canelo won a narrow split decision in the rematch a year later.

Golvokin is currently the IBF World Middleweight champ, who has had his unification bout with Japanese WBA titleholder Ryota Murata delayed due to Covid 19 restrictions from last December. They are alleged to be re-scheduled to fight later this Spring.

The report Wednesday follows a pattern of Coppinger apparently getting his info from Hearn or someone close to him, who has a vested interest in trying to leverage Alvarez to agree to do a deal with Matchroom.

Matchroom did promote Alvarez’s victories over England’s Callum Smith in November 2020, followed by Turkey’s Avni Yildirim and then, England’s Billy Joe Saunders last May. The latter of those fights being in front of 65,000+ fans at AT&T Stadium in Arilington, TX. They were all streamed on DAZN, but also offered on PPV for non-subscribers and on different PPV in Mexico.

Now, we continue to wait and see what deal Canelo makes… or doesn’t.