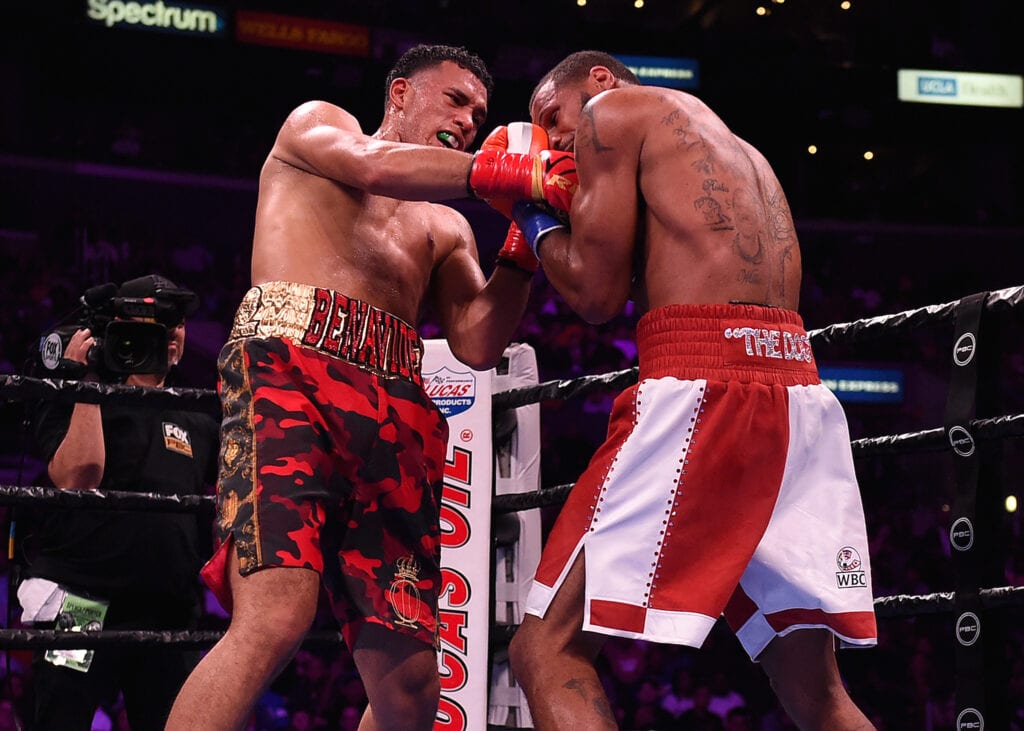 An anticipated World Championship fight, involving WBC Super Middleweight champion David Benavidez, appears to be back on for August.

That’s according to a report from The Athletic’s boxing insider Mike Coppinger on Friday night. Coppinger says Benavidez’s previously scheduled title defense with Roberto Angulo for April will now be part of Showtime Championship Boxing’s return to televising the sport:

Showtime, and Premier Boxing Champions had announced the Benavidez-Angulo title fight in Benavidez’s hometown of Phoenix for April the week of the Covid-19 shut down of the sport in mid-March.

Benavidez was last in action in September, when he stopped Anthony Dirrell (photo at top) in the 9th round to regain his WBC 168 lb. belt in Los Angeles on the undercard of Errol Spence’s victory over Shawn Porter. The fight was stopped in large part due to a nasty gash that Benavidez opened over Dirrel’s eye in the sixth and continued to score at will from then on.

Benavidez (22-0, 19 KOs) regained his WBC title that night after previously having lost it due to testing positive for cocaine in a voluntary anti-doping agency (VADA) pre-fight drug test in August of 2018.

He was subsequently stripped and suspended by the WBC for four months.

As for the Colombian-born Angulo, he challenged Super Middleweight champion Gilberto Ramirez unsuccessfully in 2018 for his only pro loss (26-1). He was last in action in a split decision win in January.

Although not yet officially announced by the premium cable outlet or by PBC, this fight would be the second in a return of the series for Showtime. The outlet is scheduled to have its first fight card in four and half months, on August 1st.

That’s when, unbeaten 18-0, Philadelphia Jr. Featherweight Stephen Fulton will battle veteran Angelo Leo for the, now vacant WBO 122 lb. title. Former champ, Emmanuel Navarrete, gave up his title after deciding to move up to Featherweight full time and is expected to get a title shot of his own later this fall.

For now, after reportedly considering the Viacom/CBS TV studios in Los Angeles to hold/televise their fights, without fans present, Showtime will instead use a familiar venue, the Mohegan Sun Resort and Casino in Connecticut, at least for their August shows.

Boxing returns in Britain Friday night with Queensberry show
Unified Champ Joshua re-emerged on social media Saturday
Advertisement
To Top
We use cookies to ensure that we give you the best experience on our website. If you continue to use this site we will assume that you are happy with it.Ok