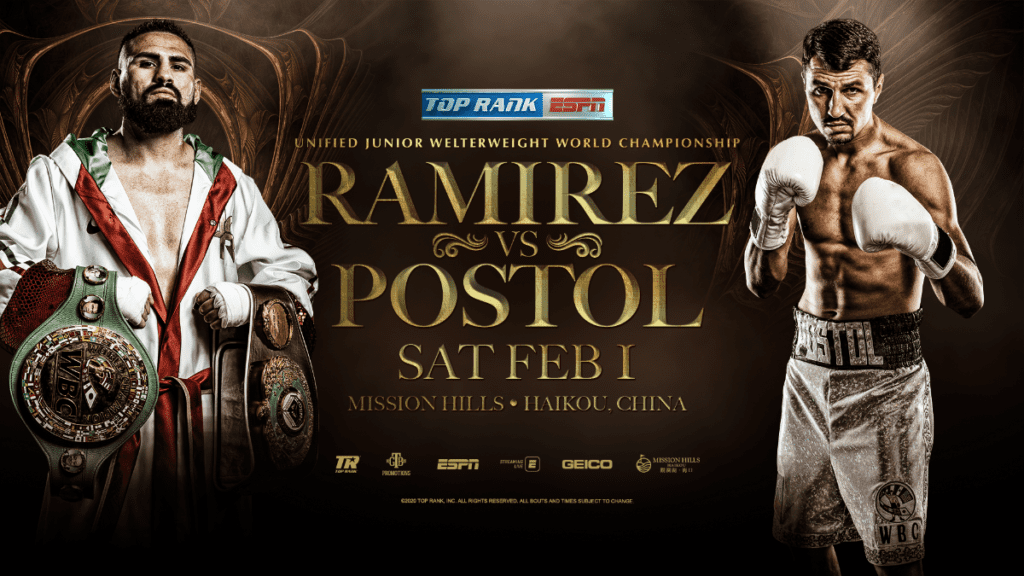 Jose Ramirez’s WBC/WBO junior welterweight world title defense against former world champion Viktor “The Iceman” Postol — originally scheduled to be broadcast live on ESPN from Mission Hills Haikou in Hainan, China on Saturday, Feb. 1 — has been postponed due to the coronavirus outbreak in China. This story was first reported and broken by Mike Coppinger of The Athletic late Thursday evening.

For those who haven’t seen the world news and the happenings in China, the coronavirus is something that starts common-cold symptoms affecting the nose, sinuses, or upper throat, and are spread through sneezing, coughing or direct contact.

Some types, however, lead to more serious, sometimes deadly respiratory diseases, like severe acute respiratory syndrome or Middle East respiratory syndrome, known as SARS and MERS, respectively. As of this writing, it has affected over 800 people in the country and has killed 26. This outbreak canceled not only this fight but also the yearly holiday traditions that were expected to take place this weekend.

The Ramirez-Postol bout will be contested at a date and venue to be determined.

“The health and safety of our fighters and everyone working on the event is the most important thing,” said Top Rank chairman Bob Arum. “We hope the situation is brought under control soon. We look forward to staging events at Mission Hills Haikou in the very near future.”

Arum in a tweet from Coppinger explaining the fight cancelation also quipped, “I have a big fight coming up, what if they f***ing put me in quarantine, I’m goin’ to miss (Wilder-Fury 2) because of this cockamamie disease?”

It is a difficult situation, and while this match being postponed is always a bummer, let’s hope the situation in China gets better as this goes way beyond the ring. The card also had slated 2012 Brazillian Olympian middleweight contender Esquiva “La Pantera” Falcao in action as well.

Andrew Cancio signs with Top Rank
Daniel Roman Media Workout Quotes and Photos
Advertisement
To Top
We use cookies to ensure that we give you the best experience on our website. If you continue to use this site we will assume that you are happy with it.OkPrivacy policy