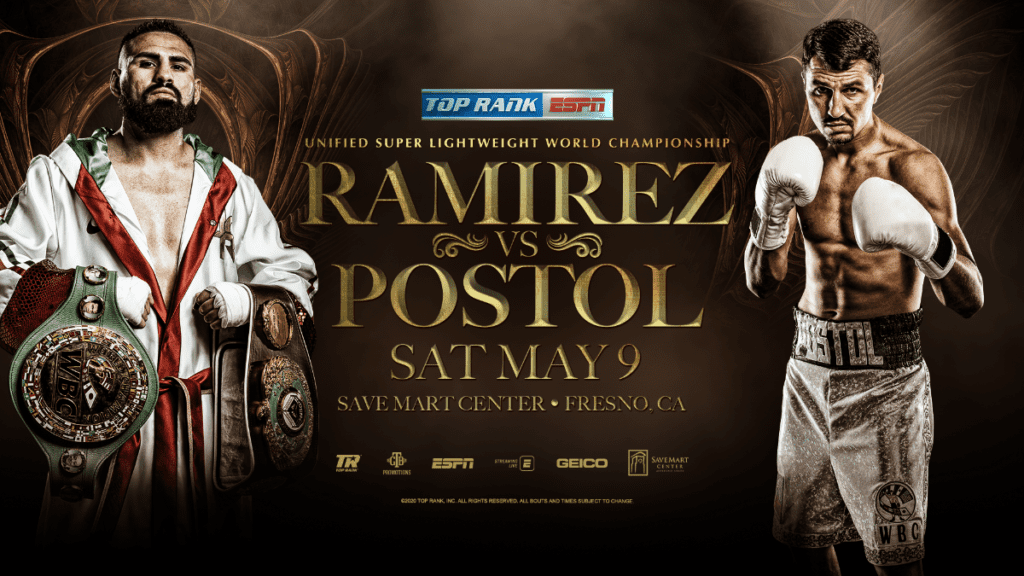 Ramirez-Postol made official for May 9th

It was delayed but now it is back on.

WBC/WBO super lightweight world champion Jose Ramirez, the pride of California’s Central Valley, is set to return. Ramirez will defend his titles against mandatory challenger and former world champion Viktor “The Iceman” Postol Saturday, May 9 at Save Mart Center in Fresno, a short drive from Ramirez’s hometown of Avenal. Ramirez and Postol were set to fight Feb. 1 in China, but the bout was postponed due to the coronavirus outbreak.

Ramirez-Postol and a 10-round super lightweight battle between former two-weight world champion Jose “Sniper” Pedraza and surging 2008 U.S. Olympian Javier “El Intocable” Molina will be televised LIVE on ESPN and ESPN Deportes beginning at 10 p.m. ET, with the undercard bouts scheduled to stream in English and Spanish on ESPN+ starting at 7 p.m. ET.

“We are pleased that Ramirez and Postol will finally fight May 9 from the great city of Fresno,” said Top Rank chairman Bob Arum. “Viktor is a worthy mandatory challenger who earned his title shot, and Jose will be fully prepared to make a statement. And for Jose, this could be his last fight in Fresno for a long time, so I expect the Central Valley faithful to fill up the Save Mart Center for a special evening.”

? JUST ANNOUNCED: The pride of the Central Valley will defend his belts on home turf!

Ramirez (25-0, 17 KOs) is one of two unified junior welterweight champions. He won the WBC world title in March 2018, prevailing via 12-round shootout against Amir Imam in New York City. He defended that belt twice before stepping up to fight Maurice Hooker in a highly anticipated title unification bout. In one of the best fights of 2019, Ramirez knocked out Hooker in six rounds. A 2012 U.S. Olympian, Ramirez has headlined at Save Mart Center five times previously and has drawn a total of 65,794 fans through the arena’s turnstiles. Last time he fought at Save Mart Center — February 2019 against Jose Zepeda — he drew a career-high turnout of 14,034.

“It is always a blessing to fight at Save Mart Center in front of my loyal fans,” Ramirez said. “I prepared for Postol once, and I will be in top form May 9. My trainer, Robert Garcia, will have me ready for whatever he brings to the table. He is a former world champion who I cannot underestimate.”

Postol (31-2, 12 KOs) has spent the majority of his 12-year career as a super lightweight and nearly a decade at, or near, the top of the division. He stunned the boxing world in October 2015 when he dethroned Lucas Matthysse via 10th-round KO to win the WBC world title. In his next fight, he was blunted over 12 rounds by Terence Crawford in a unification bout. He is 3-1 since the Crawford defeat, dropping a 2018 decision to Josh Taylor, who is now the division’s other unified champion. He earned the WBC’s mandatory shot at Ramirez in April with a unanimous decision over Mohamed Mimoune.

“I am glad the new fight date is set. I’m already in gym, and camp is going really well,” Postol said. “I was ready to fight on Feb. 1 and now I’m focused on May 9. The fight is taking place in his hometown, but that does not bother me because I have the experience to fight on away soil. I am looking forward to become a champion again.”

Pedraza (26-3, 13 KOs), from Cidra, Puerto Rico, held the IBF junior lightweight world title from 2015-2017 and then upset Ray Beltran in August 2018 to capture the WBO lightweight world title. He came up short in a valiant effort against Vasiliy Lomachenko in a toe-to-toe unification bout in December 2018 before knocking out Antonio Lozada Jr. in nine rounds the following May. Pedraza then moved up to 140 pounds last September and was outboxed by southpaw spoiler Jose Zepeda. He’s taking another shot as a super lightweight, this time against Molina (22-2, 9 KOs), a native of Norwalk, Calif. Molina, winner of five in a row, is coming off a pair of signature victories.

Last November, he knocked out Japanese veteran Hiroki Okada in just 65 seconds in an ESPN-televised co-feature. He followed that up with gritty eight-round decision over Imam on the Tyson Fury-Deontay Wilder II undercard.

“This May 9 fight against Javier Molina will be crucial for my career. This is a crossroads fight, and I will do everything in my power to return to the winning route against a world-class opponent,” Pedraza said. “I know Molina very well. I saw him fight while we were at the 2008 Olympics in China. He is coming off a couple of big wins and is looking for a world title shot at 140. I’m also looking for a world title shot at super lightweight, and that makes this fight a significant and interesting one. I’m working extremely hard because I know that to get a world title opportunity, I can’t have another loss on my record. I will get a big win against Javier Molina on May 9, and after that, the ‘Sniper’ will aim for a world title at 140.”

“I’m happy to get right back in the ring with another tough opponent. With a win over Pedraza, I feel like it should definitely set me up for a title shot next,” Molina said. “I’m excited to be on ESPN once again and continue to get that exposure. I’m just ready to go. 2020 will be my year.”

Hrgovic , Yeleussinov added to Prograis-Hooker
David Benavidez will headline on Showtime in April
Advertisement
To Top