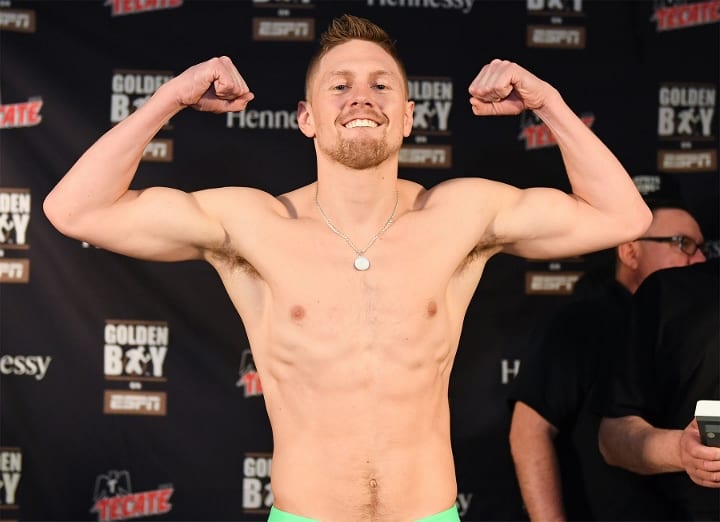 One person who will not be attending the Matchroom “Fight Camp” series is Middleweight contender Jason Quigley.

Promoter Eddie Hearn has confirmed that Quigley will not fight Jack Cullen as part of the upcoming Matchroom series to debut in August.

Their bout was expected to be part of the pay-per-view undercard to the Heavyweight clash between Dillian Whyte and Alexander Povetkin, which is taking place on August 22nd.

The reason that Quigley (18-1-1, 14 KOs), originally from Ireland but now living and training in California, withdrew was not provided to Hearn. Quigley is promoted by Golden Boy Promotions.

“We did have Jack Cullen against Jason Quigley. Jason Quigley pulled out of that fight last night which was really disappointing to be honest with you. It baffles me, some boxers that haven’t been able to get themselves ready… maybe I don’t know the full story. It was disappointing,” Hearn told IFL TV in an interview.

As for Cullen, he has the great nickname of “Little Lever’s Meat Cleaver,” while hailing from Little Lever, Bolton, Lancashire, England.  Cullen is 18-2 and was victorious in his last fight at the Manchester Arena in March against Tomas Reynoso scoring a second round TKO.

Cullen’s previous bout was an 11th round TKO loss in November to up and coming English Middleweight contender and Commonwealth Champ, Felix Cash. Cash (12-0, 8 KOs) will be the “Fight Camp” main event, Friday night August 14th putting his Commonwealth Championship up against Jason Welborn.

There’s still time (seven weeks) for Hearn and Matchroom to potentially find an opponent for Cullen, if both desire.

The biggest of the four “Fight Camp” card series will happen Saturday night August 22nd, and that’s when WBC number one contending heavyweight Dillian Whyte of England will be back in action against former IBF Champion, Russian Alexander Povetkin.

That title eliminator showdown was originally scheduled for May 2nd in Manchester before the shutdown of the sport do to Covid-19. Hearn and Matchroom have been hesitant to have that fight without fans, but now see it as an important opportunity to re-vive the sport in the short term in the U.K.