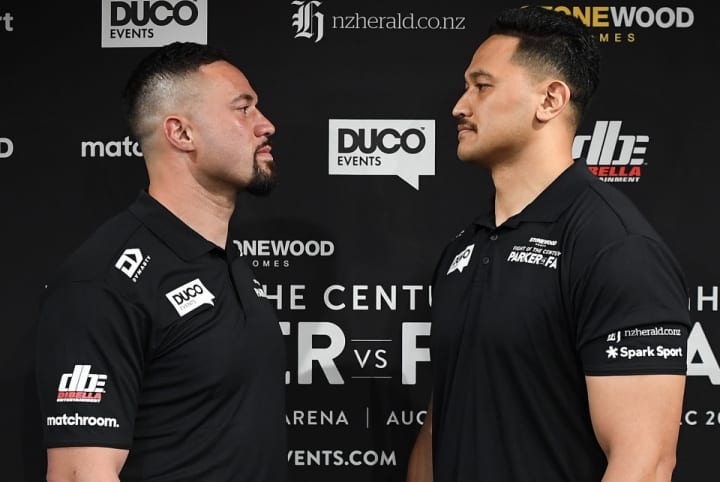 Joseph Parker and Junior Fa will clash in the biggest fight in New Zealand boxing history, live on DAZN from Spark Arena, Auckland, on Friday December 11 (New Zealand time to be announced later).

Former WBO World Heavyweight ruler Parker (27-2 21 KOs) is ranked #3 with the WBO and is plotting his return to World champion status having stopped Shawndell Winters in five rounds in his last outing in Dallas in February.

Unbeaten Fa (19-0 10 KOs) is hot on Parker’s heels in the WBO rankings at number six and the 30-year-old will be determined to come out on top in the biggest fight of his life with huge stakes on the table. The South Auckland fighters are aiming for a shot at the WBO World title and the winner of this highly anticipated bout will put them on a trajectory for a huge 2021.

?️ “This is going to be war. We’re looking forward to co-promoting our first event in New Zealand with @D_Higgins_Duco & @DucoEvents" – @EddieHearn ? #ParkerFa

“This is going to be war,” said Eddie Hearn. “We’re looking forward to co-promoting our first event in New Zealand with David Higgins and Duco. There’s plenty of needle with the amateur rivalry and there’s national pride at stake. A win over Fa will catapult Joe back into World Title contention.”

“Given the challenges facing major sporting events around the globe right now, getting this fight over the line is absolutely huge, and we are grateful to our partners Matchroom for their backing to make this happen,” said Parker’s manager and Duco’s founder and Director David Higgins. “With both boxers inside the WBO top 10 world rankings and in their prime, this is undeniably New Zealand’s fight of the century.”

The match-up will be a mouth-watering prospect for Kiwi boxing fans and for all sports fans starved of big events. The demand for a Heavyweight bout of this stature is enormous and the pay-per-view audience is expected to reflect that. With so much at stake for both fighters and the previous history of Parker and Fa winning two bouts each in their amateur days, commentators are already talking about the bout being an instant classic with fans standing firmly on both sides of the ring.

“I’ve always believed that Junior Fa had the ability to become a World champion and, on December 11, he’ll have the opportunity to prove that against a former Heavyweight champion and amateur rival, in countryman Joseph Parker,” said Lou DiBella, President of DiBella Entertainment. “Not only is this matchup one of the biggest fights in New Zealand history, it has high significance on the Heavyweight landscape worldwide, with the winner closing in on a world title shot.

With a win, Junior can become a New Zealand sports superstar and a worldwide boxing star in one night. I’m proud to co-promote this historic fight card with David Higgins’ Duco Events and Matchroom.”

“Parker’s an Auckland born Samoan, Fa an Auckland born Tongan; the fight is taking place in the largest Polynesian city in the world; both fighters are close to and desperate for a title shot; they have a split history in amateur fights, and they are both members of the same Mormon Church. This fight already has everything,” said Higgins.