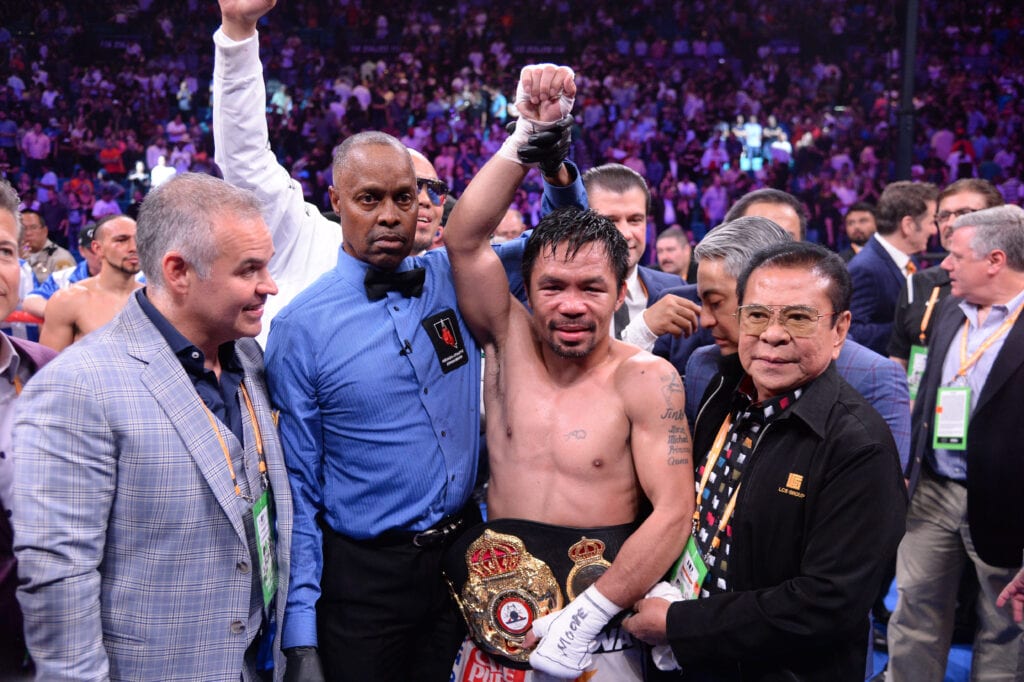 Pacquiao is ready for Spence-Porter winner

The overriding theme from this Saturday’s pay-per-view fight between Errol Spence and Shawn Porter is pretty simple.

The winner gets a shot a Manny Pacquiao.

While Pacquiao is on boxing hiatus while he does his Senator duties until 2020, the eight-division champion is still in 2019 a boxing box office draw. Even if you don’t think so, his latest pay-per-view against Keith Thurman in July did reportedly around 500,000 buys.

With a fight with Pacquiao in the balance, more importantly, will back up the Brinks truck for the winner also. The match in which Pacquiao faced Thurman, the disclosed fight purses was reported that Pacquiao earned a guaranteed  $ 10 million while Thurman earned $2.5 million. That figure didn’t include any additional money coming in from the event which could double that for both fighters.

These figures come into play because of a California State Athletic Commission official relayed to Boxingscene.com on Friday the purse amounts for each participant for Saturday’s contest.

An official who saw the contracts told BoxingScene that both Spence and Porter would each earn $2 million for their fight Saturday night at the Staples Center in Los Angeles. David Benavidez and Anthony Dirrell, who are fighting in the co-main event, signed a contract for $1 million each.

For Spence who is the favorite in this fight, this is a smaller purse than when he faced Mikey Garcia in March where he earned 3 million apiece which was also on pay-per-view.

Pacquiao, when speaking about the fight, wasn’t talking about the money in the promotion leading up to the battle but instead is thoughts on the matchup.

“It’s going to be a good fight, a close fight,” Pacquiao said in an interview with Premier Boxing Champions. “But I think Spence will win. It’s not going to be a one-sided fight, it’s a competitive fight. The fans must watch this fight cause it’s a once in a lifetime fight”.

“I have no problem fighting the winner of Spence and Porter,” Pacquiao stated. I can fight anybody.”

On Saturday night at the Staples Center, Pacquiao will have his answer of which one of the two.

Spence-Porter Final Press Conference Quotes
Deontay Wilder made Ortiz rematch official Saturday
Advertisement
To Top
We use cookies to ensure that we give you the best experience on our website. If you continue to use this site we will assume that you are happy with it.Ok