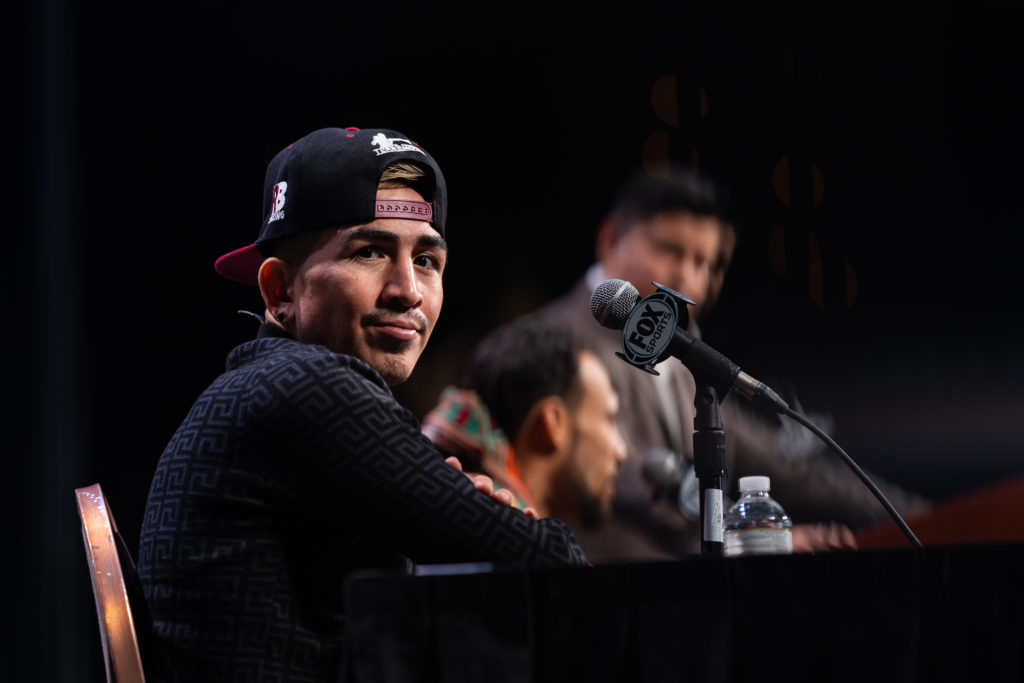 Coming up Saturday night in Las Vegas, former two division world champ Leo Santa Cruz will be back on a big stage. This, as “El Terremoto” (Earthquake) gets set to battle rising Super Featherweight Keenan Carbajal in a non-title 10 round co-feature for the Keith Thurman-Mario Barrios PPV main event.

Earlier this week, Santa Cruz, the former Unified Featherweight champ, met with the media to discuss his nearly 1 1/2 year layoff and his desire to get another world title shot at 126 lb., if he’s victorious,

#SantaCruzCarbajal speak on their return to the ring and why they need a victory over their opponent Saturday night. pic.twitter.com/rZeiUI8vxY

“I’m excited to be back and entertain the fans. I’m hoping there will be no ring rust because I’ve had a lot of time training hard in the gym. You never know until you’re in the ring, but I’ve been feeling good leading up to this fight,” the 33 year old Santa Cruz said.

“I’m anxious to get back in the ring. We’re going to see how my body will react to the layoff on fight night. Me and my team have been really pushing each other in training, so I believe we’re going to deliver a great fight.

“It was always my dream to fight here in Las Vegas. When I was a kid, I saw all the champions fighting here Every time I fight in Las Vegas, I leave everything in the ring.

“Hopefully everything goes well on Saturday, then I’ll be ready to fight (WBC Featherweight Champion) Mark Magsayo. I wanted to fight Gary Russell Jr., but that fight never happened. I think that a fight against Magsayo would be really great.”

Santa Cruz, 37-2-1, was last seen moving up to Lighweight, but being knocked out with a single, booming left uppercut by Gervonta Davis in October of 2020. And, he’s taken to time to regroup, get back in shape and take a fight that he hopes will make him relevant, again.

After all, despite the loss to Davis, he still owns the WBA Featherweight championship.

Hear us discussing the Thurman-Barrios PPV card on the latest “Big Fight Weekend” podcast with Dan Canobbio of “Inside Boxing Live” by clicking below,

But, Santa Cruz’s opponent Carbajal will be no easy task. This, as the Phoenix native has won 18 bouts in a row while having not lost a pro bout since early 2015. Still, Santa Cruz knows that a win, especially impressively, will put him in position to fight the Filipino Magsayo.

Magsayo just recently dethroned longtime WBC Featherweight title holder Russell by 12 round decision in a monumental win for his career. And, with both fighters under the Premier Boxing Champions umbrella it’s no secret that a Magsayo-Santa Cruz title fight would be easy to make later in the Summer of 2022.

Now, it’s up to the veteran Santa Cruz, who had won five straight world title fights before the Davis KO loss, to do his part.