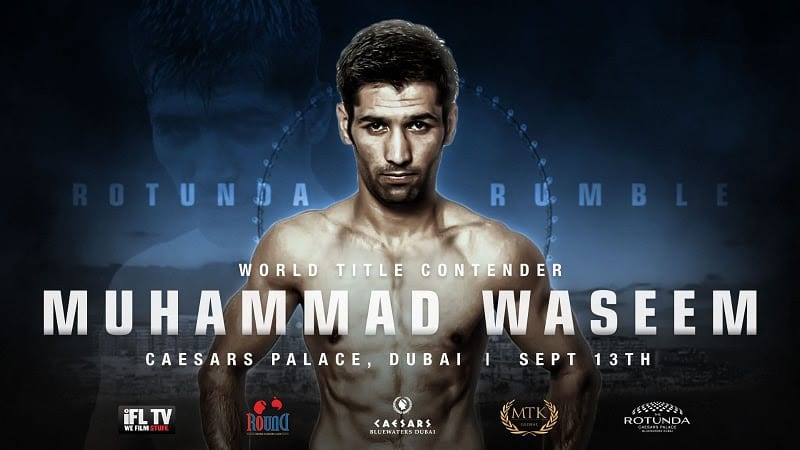 Flyweight star Muhammed Waseem will make his long-awaited return to the ring when he headlines the fantastic ‘Rotunda Rumble’ event in Dubai on September 13.

The card will be promoted by Ahmed A. Seddiqi’s Round 10 Boxing in association with MTK Global and takes place at the Caesars Palace Dubai.

Another fantastic card heading to Dubai on September 13. 💥

Waseem said to the press:

“I’m really happy to be fighting in Dubai. It will be really good for my career because I am fighting after 14 months out and I’m very excited to be coming back in the ring after a long time.

“I am a very proud part of MTK Global, and I can’t wait to fight. I don’t want to disappoint my fans so I will give them a very good performance.

Ahmed A. Seddiqi of Round 10 Boxing added to the media:

“We’re delighted to have Muhammad Waseem headline our huge ‘Rotunda Rumble’ event next month. He is widely regarded as one of the best flyweight fighters in the world and we can’t wait to have him part of our Round 10 Boxing event.

“To have high-quality talent like Waseem fighting in the region shows how much Round 10 Boxing is going from strength to strength in Dubai, and he is just one of several fantastic fighters that will be in action.”

More huge names are set to be added to the card in the near future, as MTK Global hosts their second event in Dubai following the massive success of The Fight DXB Uncovered at Emirates Golf Club back in April.

On that occasion, there were two major title fights along with many exciting stars in action, as they competed in front of royalty on a historic night.

September’s event is the latest in the partnership between Round 10 Boxing and MTK Global. Round 10 Boxing prides itself on being Dubai’s only exclusive boxing club, and their ethos has always been to promote passion in boxing.

Click here for tickets to this card and other MTK Global Events.

Daniel P Lewis teams with MTK Global for Charity World Record Try
The stage is set for Kovalev-Yarde in Russia
Advertisement
To Top
We use cookies to ensure that we give you the best experience on our website. If you continue to use this site we will assume that you are happy with it.Ok