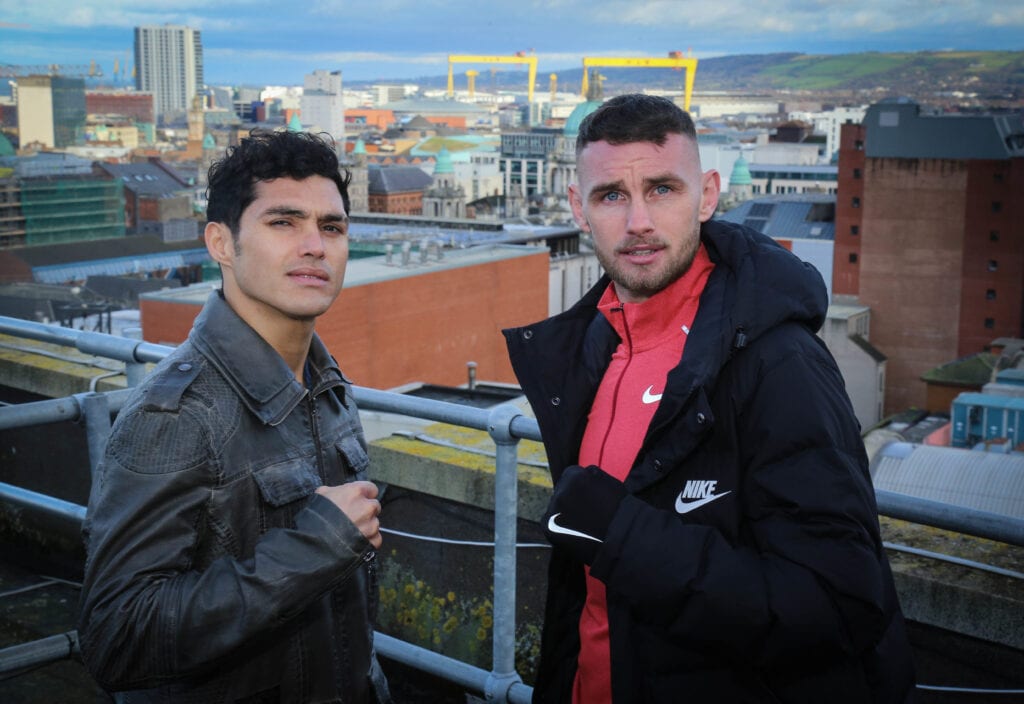 The massive sold-out event takes place on Saturday – live in the US on ESPN+ in association with Top Rank and worldwide on IFL TV.

The fighters met during the final press conference on Thursday, and here’s what they all had to say…

McComb said: “I’m trying to get to the top as quick as I can. Godoy has a great record, he has more knockouts than I have fights, so I’m aware of the step up but I’m aware of my ability.

“I’ve taken some criticism for my last fight, but myself and my trainer Danny Vaughan have worked on that in the gym, and we’ve learned.”

Godoy said: “I’m really thankful of the opportunity given to me and I’m extremely excited for this fight. We’ll see on the night of the fight how it goes. I’ll analyse the situation and we’ll go from there.”

Cully said: “I’ve seen a few interviews that Joe has done, and he seems to think we’re entering a strongman competition on Saturday.

“It’s a boxing match at the end of the day and I’m excited to showcase my skills. I believe I’m a better boxer in all departments, and I’m looking forward to seeing what he brings to the table.

“It’s a fight that me and Joe both deserve credit for it, we didn’t have to take this fight at this stage of our career, but we both stepped up to prove who’s the best.”

Fitzpatrick said: “I’ve had a great camp and I’m as fit as I can be. I think I’m a lot stronger than Gary, so I’m looking forward to Saturday. Let’s do it.”

Joyce said: “I believe I’m at the weight I feel comfortable at and really strong at. I thought it was at featherweight but I realised in my last fight that it wasn’t the weight for me.

“My sparring has been on point. This is one of the best camps we’ve had in a long time. Lee Haskins has been in the ring with good guys in the past and has done it, but come Saturday I bring a different game and tactics.

“I’ve got that experience behind me as an amateur, and I’ve learned a lot over the years. It’s going to be an amazing night on Saturday, and with the other fighters on this bill, it’s truly an honour to be on it.”

Haskins said: “Throughout my career I’ve won everything I could possibly win, but for me I’m here to prove to myself I can still do it. In the gym I’m sparring everybody and I’m still on top.

“If I thought I was past it then I wouldn’t be here today. I boxed in Belfast when I fought Ryan Burnett and loved it. David Oliver Joyce is a tough fighter so I’m looking forward to sharing the ring with him.

“He seems to come forward and walk onto shots, and that’s what we’ve prepared for. I haven’t been in a big fight like this for a long time, so I’m excited to show people what I can do.”

Crocker said: “I’ve really worked hard in this camp. John has been there on the big stages and only been beaten by good lads, so I know he’s a quality opponent. We’re both coming to win and it will be fireworks on Saturday night.”

Thain said: “The reason I’ve come back is because I love boxing and I love the sport. I’m looking forward to this fight because it’s two men coming to win.

“It’s a great opportunity for me in a great city. Me and Lewis will bring out the best of each other, I wanted a fight that represents a challenge and I’ve definitely got that.”

MTK Global Professional Development Coordinator Jamie Conlan said: “Last year we set our stall out very high with numerous fights at the Ulster Hall, and we’re trying to build the place into a cauldron in Belfast.

“These match-ups could fill big arenas I believe. This is a big card full of big fights. I’m very excited about what the future holds for everybody at MTK Global.”

The fight week activities continue with the weigh-in at the Europa Hotel at 1:00pm on Friday, before the all-important fight night at the Ulster Hall on Saturday.