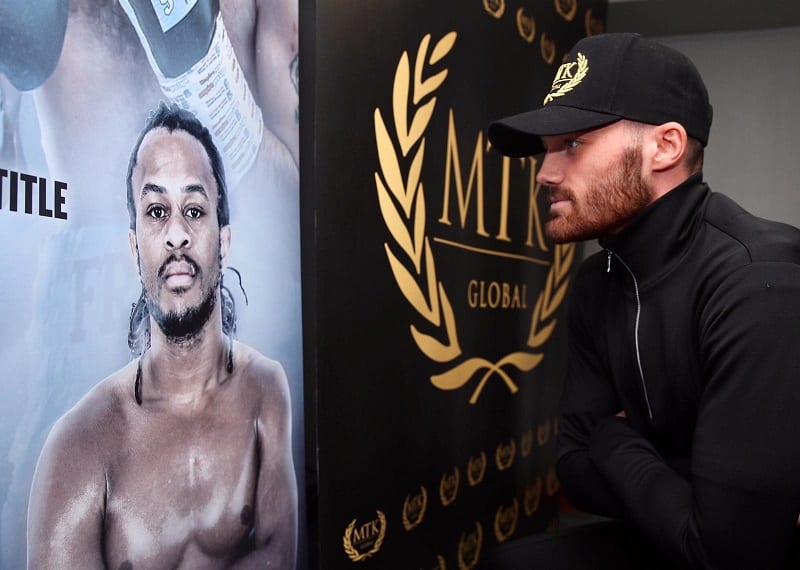 A huge card takes place at the Brentwood Centre on Saturday – live in the US on ESPN+ in association with Top Rank and worldwide on IFL TV, and features Danny Dignum (12-0, 6 KOs) defending his WBO European middleweight title against Alfredo Meli (17-0-1, 5 KOs) in the main event.

The press conference took place on Thursday with a few absences, most notably Felix Jnr, and Gilley had plenty to say about not seeing his opponent.

Here’s all of the quotes from today’s presser…

Dignum: “A fight like this speaks for itself. I’ve never been one to trash talk or put anybody down. Boxing is my job and it’s a business, so there is no need to talk rubbish about anyone.

“I’m there to do my job on Saturday and that’s what I’ll do. I’ve sold over 300 tickets so there is a bit of pressure but I have to use that to my advantage and it’s going to switch me on.

“Every fight in this stage of my career is big because I’m only one or two wins away from a massive fight. I’ve got to get Meli out of the way and then look onto other things.

“Meli is a very good fighter. I know I’m in for the hardest fight of my career to date. I’ve got to use my boxing skills and get the win. He’s going to drag me into the trenches, but I’m prepared for that and ready for anything he’s got to offer.”

Gilley: “If I was fighting on his show, I would be there and telling him I’ll beat him up on Saturday. I was looking forward to seeing him and he isn’t here.

“He can be elusive, but we’ve got a plan and I do believe I’ll break him down and get to him. I’ve wanted this since I was 11, and he’s getting knocked out on Saturday.”

Day: “I’ve loved being back in camp. I’ve won the Southern Area and this is an eliminator for the English, but I am much more than just that level.

“I want to move a step above after this fight and shine bright again. I wnat to tick them all off to get the journey right, by doing the Southern Area, English. British, European route, and then going on from there.

“Every fight is a tough test. On paper I think Adolphe may have been tougher than this because of his amateur experience, but we’ll see what Kaisee brings on the night.”

Benjamin: “He will be my biggest test but I don’t think he’s fought anybody like me. I’ve proven in my domestic fights that I am capable of fighting at this level.”

Hawley: “I’ve been training with Mark Tibbs and he’s a world class trainer. I’ve had great sparring with Charlie Duffield and Andre Sterling, and they’re top boys who all punch harder than Josh.

“On paper this is a bigger fight than what I’ve had so far, but it’s going to be another walk in the park. On Saturday you’ll see the difference.”

Adewale: “I’m not one to do the talking, but I will win this fight very convincingly. From what I’ve seen, there is nothing that can trouble me. If he can box as good as he can talk then he won’t do too bad.”

Promoter Lee Eaton added: “The main event is a massive fight. Danny Dignum is no. 10 in the world with the WBO, and he’s got an absolute animal in the opposite corner in Alfredo Meli.  Meli is no easy fight, but Danny has trained hard.

“We then have Sam Gilley who we signed in 2019, and the proof has been in the pudding so far. He’s been faultless, and here he has a chance to win the Southern Area title. Conor Benn said Gilley is the hardest spar he’s ever had.

“Shaquille Day against Kaisee Benjamin is a great fight between two good boxers, and the winner will move into English title level, and then we have Josh Adewale vs. James Hawley, where both fighterss wanted proper fights and didn’t want to fight journeymen.

“The winner will go on and look at eliminators, but the loser will come back and it’s not the end of the world, so it’s good to see both boys putting it all on the line.

“We’ve got Steven Donnelly before having a big fight on May 2 against Troy Williamson, and a lot of up and coming boys on the undercard. It’s going to be a good night of boxing and I’m looking forward to it.”

Ajagba looking to improve against Cojanu
Canelo- Billy Joe Saunders fight official for May 2nd
Advertisement
To Top
We use cookies to ensure that we give you the best experience on our website. If you continue to use this site we will assume that you are happy with it.Ok