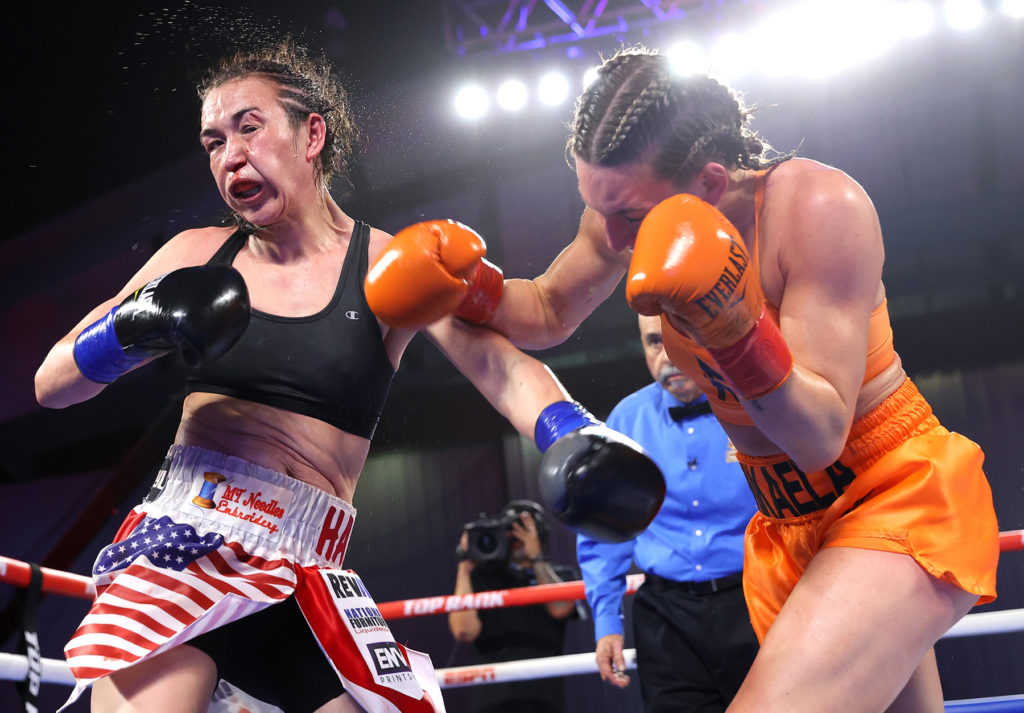 On Saturday night, Mikaela Mayer fulfilled a fighter’s dream. This, as she headlined as a world champion in her hometown on a major broadcast outlet.

Mayer, who grew up in Southern California and then left to pursue a boxing career came back “home” and bested former world champion Jennifer Han by unanimous decision (100-90 2x and 99-91) to retain her WBO and IBF junior lightweight world titles at The Hangar in Costa Mesa, California.

.@MikaelaMayer1 proved her name belongs among the top in women's boxing yet again last night 💪 pic.twitter.com/ZTVmzYQiR9

It was the third title defense for Mayer (17-0, 5 KOs), and her first as a unified world champion. She did everything but force the stoppage, out-landing Han by a more than 3-1 clip (192-63). Early in the fight, Mayer busted open Han’s nose with a right hand and used a stiff jab to keep Han on the defensive.

Han (18-5-1, 1 KO) landed the occasional counter against the ropes, but Mayer was never threatened. It’s onwards and upwards for the woman ranked No. 5 on ESPN.com’s pound-for-pound rankings.

“I feel like I did a lot of good things in there. Her movement, I think, is what she does best and it throws you off. She gets her spacing in a little bit, so I had to throw her off and stay behind the jab,” Mayer said to ESPN afterwards.

“Coach Al {Mitchell} reminded me to stay behind the jab, set the right hand up. She would duck sometimes and make me miss. I started to go to the body. All in all, she’s a tough, durable girl. That’s why we chose her for this fight. We knew she would push me, but I feel like I did well.

“I wanted to get the stoppage I feel like I hurt her in the eighth round, almost finished her. This is another reason why I’m advocating for three-minute rounds.”

“I’ve been pretty clear that I want to go undisputed at 130. {Alycia} Baumgardner and {Hyun Mi} Choi, I’ve been calling them out. I want {either} fight, but if they’re not going to give me that fight in a timely fashion, I’m game to go up and challenge the winner of {Amanda} Serrano versus Katie Taylor.”

Those are obviously lofty names, but Mayer deserves to be in the conversation and with Top Rank and legendary promoter Bob Arum behind her, she will likely get in the mix down the road for bigger fights/paydays.

Also on the undercard, the Australian Moloney twins each won their non-title bouts. Andrew, 23-2, 15 KOs, won his Jr. Bantamweight bout by 10th round TKO over Gilberto Mendoza. And his brother Jason now 23-2, 18 KOs, scored a unanimous decision win over Francisco Javier Pedroza in a Bantamweight clash.