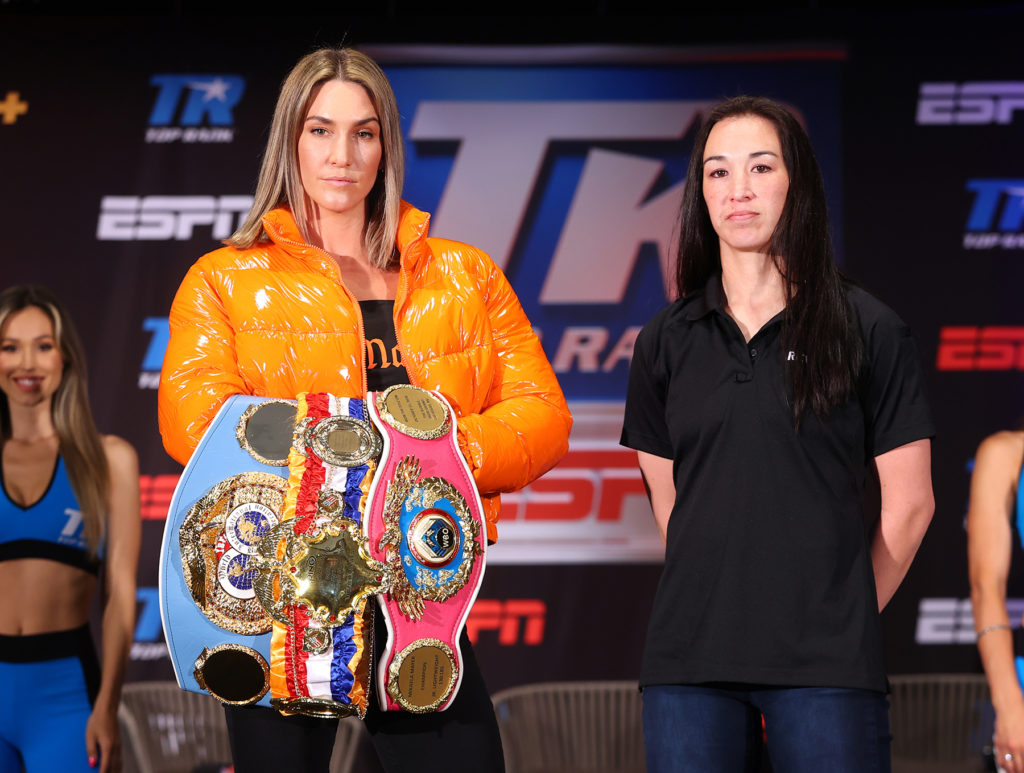 Mayer (16-0, 5 KOs) achieved international recognition following her participation in the 2016 Olympics in Rio. She signed with Top Rank the following year and made pro her debut in Los Angeles on the Vasiliy Lomachenko-Miguel Marriaga undercard.

Since then, she has been on a historic run and has broken new ground for women in the sport, including a decisive win over Helen Joseph to cap off the first female main event in Top Rank’s revamped boxing series on ESPN. Mayer unified her WBO 130-pound title with longtime IBF champion Maiva Hamadouche last November in a classic battle that demonstrated the Olympian’s ability to stand toe-to-toe in the center of the ring.

At Thursday’s final press conference, here’s what Mayer had to say,

“Ever since I walked into a gym 14 years ago, I’ve been fighting for a place for women in the sport and to prove that we are a powerful force in the sport of boxing. This contract solidifies that. I’ve completed that goal to an extent. Obviously, there is a long way to go with creating equality in the sport and closing that gap, but I couldn’t be happier with this contract. It’s a dream contract. It’s a contract I have been fighting for all these years, and I wouldn’t want to do it with anyone else but Top Rank.”

“I haven’t fought in LA in a long time. It’s kind of come full circle. I started here 14 years ago when I was 17. And I left at 19 years old with a dream: to become an Olympian and become one of the best female fighters in the world. Fourteen years later, I’m here fighting in the main event on ESPN. I’ve come a long way.”

“I’ve known Jennifer for a long time. In one of my first amateur tournaments, she was there cornering for her sister. She was around, and she had already been in the game. She’s been in this game for a really long time

It’s no secret that I wanted to continue to unify. I wanted Alycia Baumgardner. I wanted Hyun Mi Choi. That was my first choice. They’re not quite ready to step up to that, I guess, so we had to look at another direction.”

In the 10-round co-feature, Welterweight contender and San Diego native Giovani Santillan will battle Jeovanis Barraza. The ESPN telecast will open with former world champion Andrew Moloney versus Gilberto Mendoza in an eight-round junior bantamweight tilt.

We wrote about Andrew and his twin brother Jason being part of the undercard, as they are both back on the title shot, comeback trail. Jason will battle on the ESPN+-streamed undercard (7 p.m. ET/4 p.m. PT) features along with the professional debut of U.S. Olympian Virginia Fuchs in a four-round flyweight fight.

What Kind Of Night Is In Store With Ryan Garcia?
Sebastian Fundora Scored Grueling TKO Victory Over Lubin
Advertisement
To Top