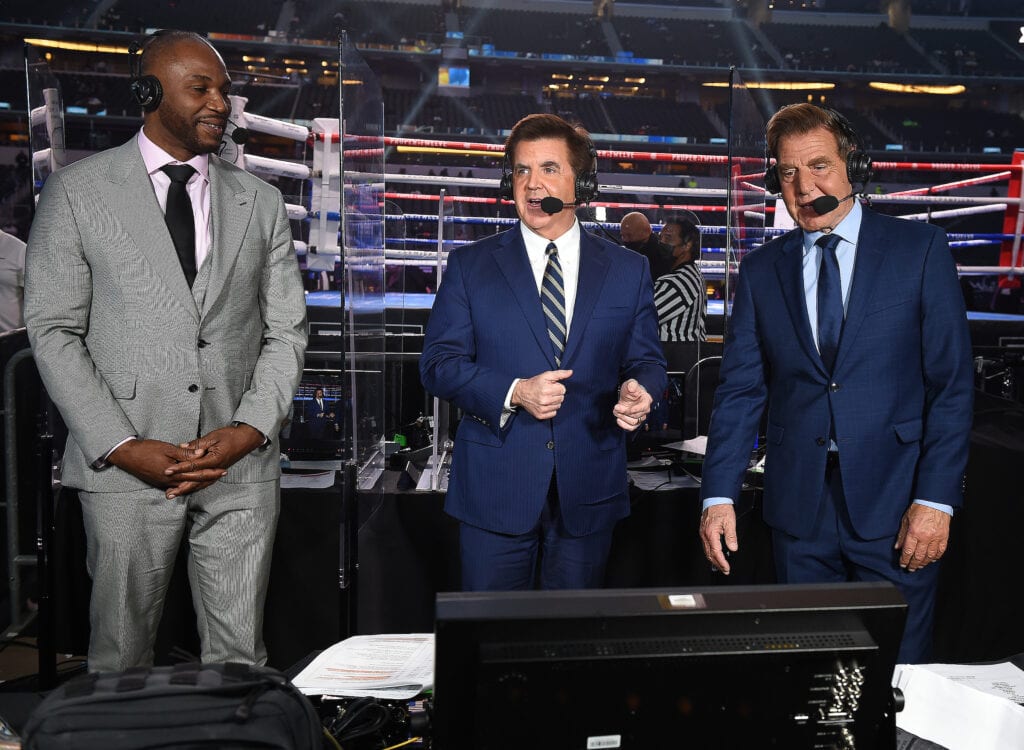 And, just like their second bout a year and a half ago, it will be a “split broadcast’ between Fox Sports and ESPN.

Fox Sports is taking the lead on the production for the trilogy bout and they released the announcer info Tuesday,

🥊 @Tyson_Fury and @BronzeBomber go toe-to-toe in the long-awaited trilogy fight on Saturday.

Click for more information on this week's full slate of #FuryWilder3 cross-platform action, including broadcasters and schedules 👉 https://t.co/nvdkrmOIPT pic.twitter.com/nSoeixVz3Z

Veteran play-by-play man Brian Kenny will get the shot to call the Fury-Wilder bout with his Fox colleague and former Undisputed Heavyweight Champ, Lennox Lewis at his side. Joining them is ESPN fight analyst and former unbeaten Light Heavyweight World Champ, Andre Ward. Lewis and Ward were the analysts for the February 2020 TKO win by Fury with ESPN’s Joe Tessitore calling the action.

As we have written previously, all parties are following the original contract for the two-fight deal for Fury and Wilder signed prior to the second fight. That dictated that in terms of the PPV broadcast, it would be made available on the rival networks of ESPN+ PPV and Fox Sports PPV. And, the two entities would work out the announcers.

Further, from the Fox Sports release,

“Wilder vs. Fury III production will include a unique mixture of innovative camera mounts, super slow motion and high resolution. FOX Sports will add a pair of JitCam cranes on opposite sides of the rings, one with the ability to move up to 100 feet along a track from one side of the venue to the other. A Dynamicam, a mini three-axis cable cam system, functioning as a wired “drone” on the reverse side of the ring, will fly over the audience. A super high-resolution “c360” camera will be used above the ring in the place of a conventional robotic overhead to allow infinite zoom and pan functions to that position.

Additionally, FOX Sports will have an ultra-slow-motion camera on the reverse side of the ring, sporting a one-of-a-kind high-resolution lens to give a cinematic “Raging Bull” feel to replays. In addition, there will be several wireless cameras, including FOX Sports’ Megalodon shallow depth-of-field camera, made famous as part of FOX NFL coverage last season.

Of the 30-plus cameras, all ring coverage will be in super slow mo. On the audio front, FOX Sports will employ more than 50 wired and wireless microphones, including mics on referees and trainers.”

The retail price of the Fury-Wilder III PPV for Saturday night is suggested at $79.95