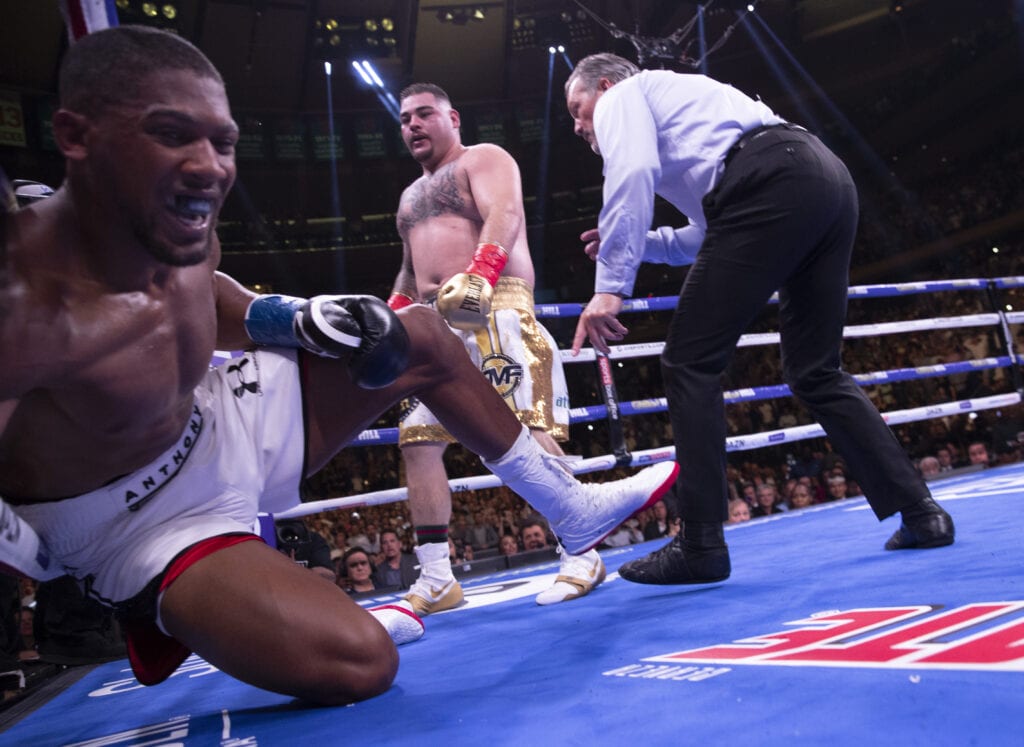 Matchroom Boxing promoter Eddie Hearn held a press conference Monday afternoon in England to announce that the much-anticipated rematch between Anthony Joshua and Andy Ruiz Jr. will take place December 7th in Diriyah, Saudi Arabia. Hearn assured the media attending that both parties have signed the contract and we have a fight set to take place.

The press conference, which lasted a solid ten minutes, was hosted by Hearn along with Omar Khalil. Khalil, who is Managing Partner of Skill Challenge Entertainment is the official event partner in The Kingdom of Saudi Arabia.

They both sat down and very briefly alongside showing a promotional teaser for the fight and explained why the battle was taking place in Diriyah. The fighters in the rematch were not present at this conference.

Hearn  in the press conference laid out the locations in mind:

“There was a lot of talk about where this fight would be held. Would it be back at Madison Square Garden (New York City, United States)? Would it be at the Millenium Stadium in Cardiff (Wales, United Kingdom)? We had approaches from Saudi Arabia, from Dubai, from Katar, from Abu-Dhabi. There’s been numerous conversations in the past about staging events in that region.”

“For us (Matchroom Boxing), we wanted to go somewhere who believed in the sport of boxing, that had a vision.

The region that Hearn is referring to is the Middle East for the fight. The chosen location seems to go in line with that this fight was going to the highest bidder, and that being Diriyah. The speculation last Friday was that up to $100 million was put up by the host country to host the rematch.

While figures at this conference weren’t mentioned, the goal of this session was to ensure everyone wanting to travel to the fight from the United Kingdom that everything would be fine. Khalil chimed in ensuring as much.

“Saudi Arabia has been very focused on enhancing the life quality of people and there overall health and well-being,” Khalil said at the press conference. Sports, art, culture, and entertainment have been playing a major role in this.

Another key for the broadcast of this fight is Dirivah, Saudi Arabia is only two hours time difference from the U.K. Hearn told the media that the anticipated start time of the title fight in Britian will be approximately 9:00-9:30 p.m. And, that will translate into potential massive Pay per View buys and revenue for this fight. The Ruiz stunning upset of Joshua in New York on June 1st did not begin until after 4 a.m. Britain time.

The press conference ended with news that there will be more of them starting in early September with locations set for New York, London, and Saudia Arabia to promote the fight.

That, as well as the undercard details for this fight, will be announced at a later time.