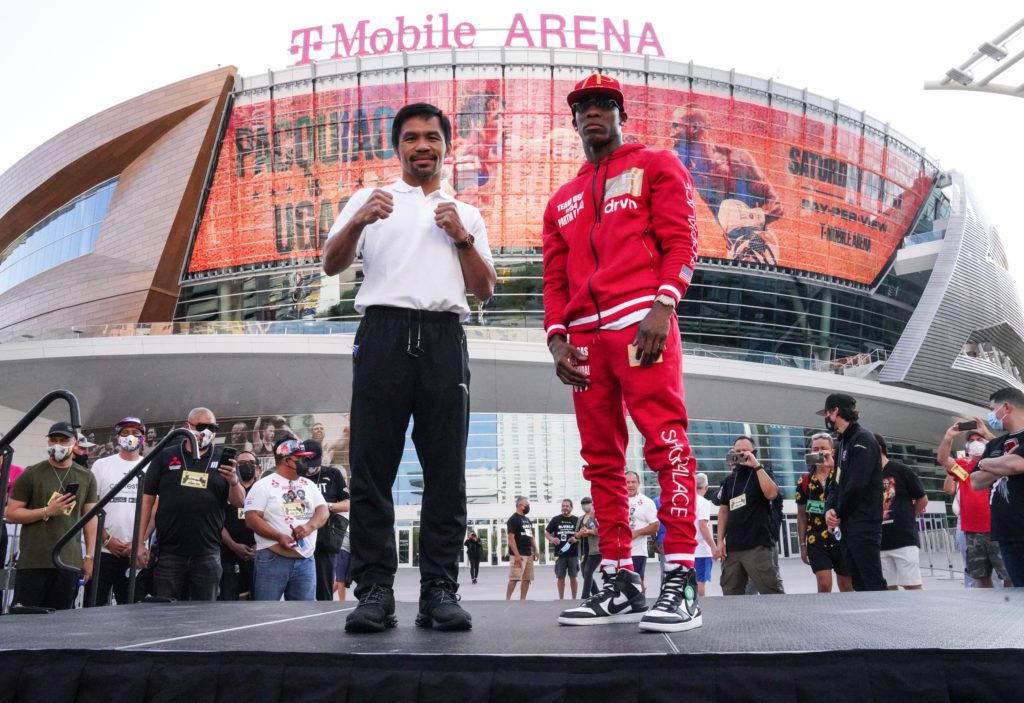 As Saturday night’s return of eight division world champ Manny Pacquiao to a ring in Las Vegas nears, he and his lesser known foe, Cuba’s Yordenis Ugas, came together Tuesday afternoon for the publicity/photo opportunity outside of the T-Mobile Arena where they’ll fight.

And in addition to the video and photos of “Pac-man’s Grand Arrival” for their Fox Sports PPV they both had comments, as well,

First, the Filipino legend, who’s making his return to the ring at 42 years old and after a two year absence said in part,

“I am excited to win another world championship on Saturday. I don’t care who has the belt right now, we’ll see who walks out of the ring with it,” Pacquiao told PBC’s Ray Flores.

“Being out of the ring has given me time to rest, but also to get motivated like in my early days. I can’t wait to display it all on fight night.

Boxing is my passion. That’s why I’m still here giving inspiration to the boxing fans and bringing honor to my country.”

Pacquiao, 62-7-2, is referring to the fight being for the belt that he used to have, when he defeated unbeaten Keith Thurman in July 2019 for what the WBA now terms their “Super” title at 147 lb. They elevated Ugas to that status earlier this year, and the Cuban, who now trains in Miami, is also eager for the biggest fight of his career,

I’m here to wreck any future plans Manny Pacquiao has in the ring and make sure that Saturday is his last fight,” Ugas said Tuesday in the Toshiba Plaza.

“It feels great to be in the main event Saturday night against a true legend like Pacquiao. I can’t wait to get in the ring… I didn’t hesitate at all when I got offered this fight. I knew right away what a big opportunity it would be and what a win like this can do for my career.

Ugas, 36-4, was preparing to make his first WBA title defense against Fabian Maidana in the co-feature of the originally scheduled Errol Spence-Pacquiao card. Spence is out with a torn retina in his left eye. So, being elevated to the main event against boxing legend Pacquiao means Ugas will get a career-defining fight sooner rather than later.

As for Pacquiao, he’s been training for over a month in Los Angeles at his 20 year trainer Freddie Roach’s gym. And, it’s a slight letdown from fighting the younger much more proven Unified WBC/IBF title holder Spence. However, he’s the draw for Saturday night, including his return to the ring for what could be his final bout.

So, the stage is set for the fighters to meet the media one last time and then get ready for arguably the biggest bout in boxing, so far, this Summer.