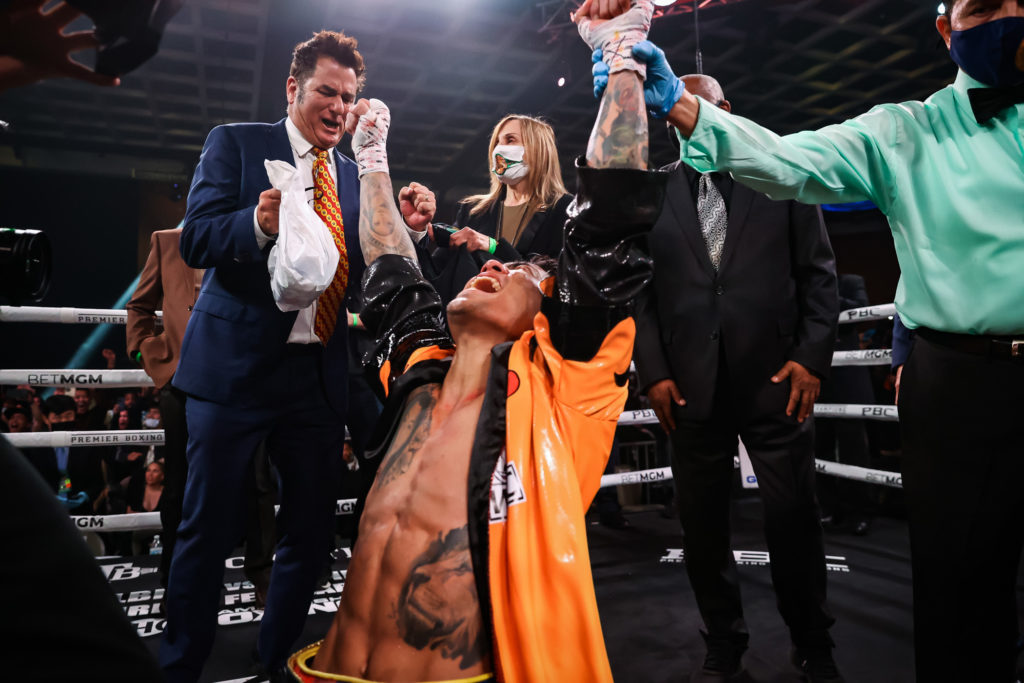 The announcement of new WBC Featherweight champ Mark Magsayo by famed ring announcer Jimmy Lennon Jr. had barely sunk in, when the congratulations from the Far East began to pour in late Saturday night.

And, at the top of the “well wishers” was none other than future Hall of Famer and the inspiration for a young Magsayo to box in the first place, Manny Pacquiao.

First, Magsayo put together a solid 12 round performance in out-fighting and then out-pointing long time champ Gary Russell to take his title,

As we wrote late Saturday night, the 26 year old Magsayo benefited from an in ring injury to the champion Russell and then, made the most of his opportunity.

Russell clearly had his right shoulder hurt from a punch from Magsayo in the fourth round. This, as the Filipino fired a straight right while Russell was moving to his left and it caught him flush on the collarbone area.

Russell could be heard on the Showtime mics in between rounds telling his corner that his shoulder was injured, and for the next few rounds he threw almost no punches with his right.

The southpaw Russell was unable to throw his jab with any zip and the Showtime Boxing “Sho Stats” revealed that he didn’t land a jab after the fifth round for the rest of the fight. He would admit after the bout that he had injured the shoulder in training, but chose not to cancel the title bout.

Meanwhile, Magsayo, who improved to 24-0, out-landed Russell 140-58 in power punches for the bout. He was effective scoring to the body and straight rights to the head in the second half of the bout.

Close, but Magsayo clearly was the better fighter in Atlantic City Saturday night.

Further, Magsayo had also made clear in the final presser before Saturday night’s upset that it was Pacquiao who’s largely responsible for putting him in position to upset Russell,

“Manny Pacquiao is my idol, ever since I was a kid. I started training at eight-years-old because of him to one day become world champion. Now that time is here. I’m so happy that Manny signed me to his promotional company and I’m grateful.”

Shortly after the verdict Pacquiao, who’s been part of Magsayo’s title run from the background sent his congratulations,

Congratulations, @markmagsayo_MMM, on your first world championship! Thank you for bringing honor to our country by becoming the latest Filipino world boxing champion. Welcome to the club.

Pacquiao, who retired as a seven division world champion last year, even took Magsayo under his wing, signing him to promotional deal. And, he even put him with his Hall of Fame trainer Freddie Roach in California.

Roach was in the corner in Atlantic City giving the rising Filipino contender advice for the milestone title upset of Russell Saturday night.

A night which has changed Magsayo’s career forever.