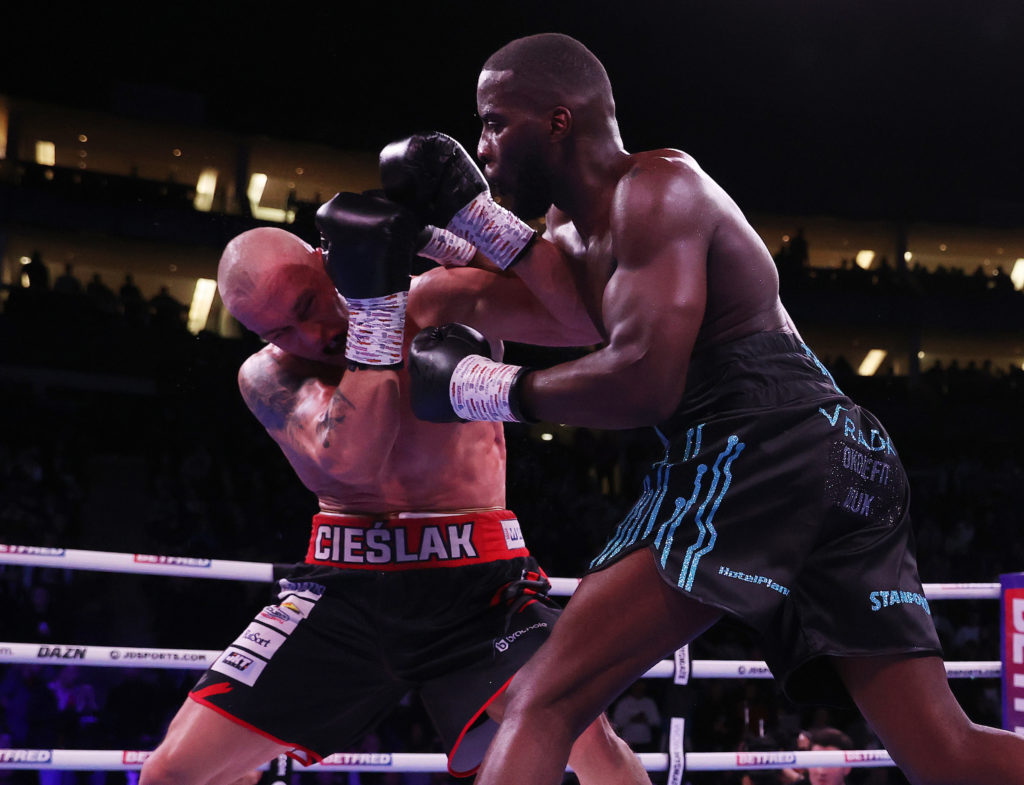 It was a world title defense Sunday night, where unbeaten, British WBO World Cruiserweight champ Lawrence Okolie wanted to win and do so, impressively. Well, he got part of that accomplished in a unanimous decision victory.

Battling at the O2 Arena, Okolie was solid early using his long jab and hard overhand rights. One of those got through for a fifth round knockdown of Cieslak. The Pole was down on both knees, but was only momentarily stunned.

A lot of the rest of the bout was marred by grappling by the challenger, who was repeatedly warned but not penalized for all the holding. Okolie did break through with another hard right in the 10th round that wobbled Cieslak, but he couldn’t follow up mostly due to the clinching and holding.

In the end, the Brit had done enough to secure another title win.

“It’s good to get that learning under my belt. He’s a top competitor. And, he pushed the pace, physically strong. It was a good 12 rounds. The right hand- he was tucking under it very well. I was trying to get him at different angles…he was coming back with good left hooks. He has a lot of grit. He was tough to get through. I was trying to find the right show. I think I was taking too long to find it, but that’s easier said after the fight.”

Okolie is a popular former British Olympian at Heavyweight in the 2016 Rio Games. And, he was making the second defense of WBO title that he won in London in March 2021 with a 6th round KO of Krzysztof Glowacki.

It is believed that Okolie will possibly next meet IBF World Cruiserweight Mairis Briedis in a unification bout later in 2022. For his part, Briedis was at Sunday night’s title fight and comically, was dressed in full costume as one of the “Mario Brothers” video game characters- right down to the fake mustache.

Now, we’ll wait to see if the marketable British champ is interested in the veteran Briedis, silliness or not.

Continue Reading
Advertisement
You may also like...
Related Topics:Featured, WBO