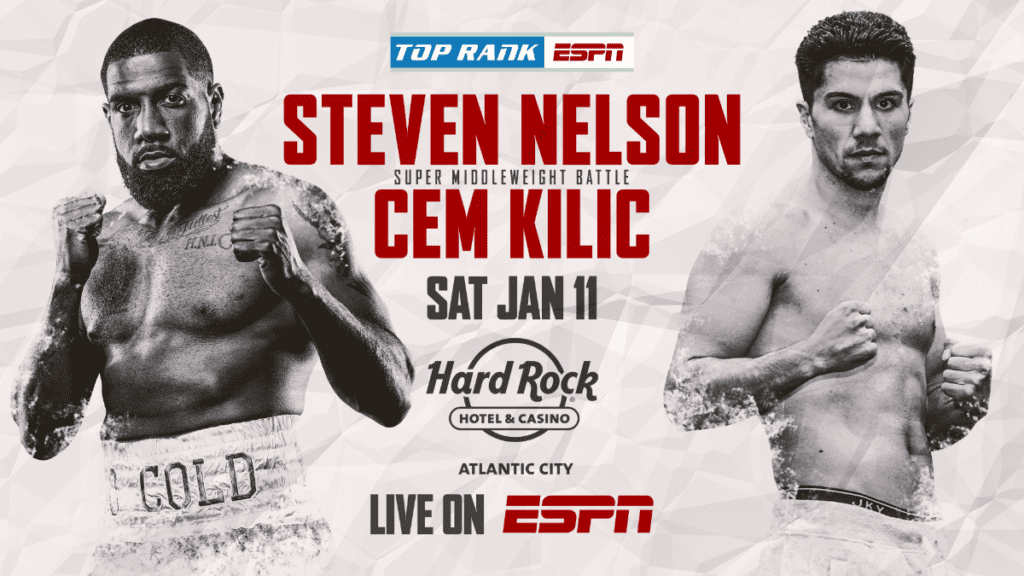 Kilic ready to shine against Nelson on Saturday

This Saturday night at The Hard Rock Hotel Atlantic City, undefeated super middleweight contender Cem Kilic will be looking to make a big statement as well as positioning himself for a world title shot when he takes on undefeated Steven Nelson in the co-feature bout of an ESPN televised card.

The bout was originally scheduled for December 14th in Madison Square Garden, but was moved to Saturday, where the fight will receive more exposure being shown live on ESPN.

Kilic of Neustadt Hessen, Germany of Turkish decent, and now calls Sherman Oaks, California, has a record of 14-0 with nine knockouts.

In his last bout, Kilic, 25 years-old, stopped tough Martez McGregor in the eighth round of their June 15th bout in Las Vegas.

Kilic, who is ranked number-seven by the WBA has been training in Vero Beach, Florida under the watchful eye of Hall of Fame trainer Buddy McGirt.

“I have had a great training camp with my Hall of Fame trainer Buddy McGirt in Vero Beach, Florida, and I feel really strong and sharp heading into fight week. This fight means so much to me, as I know my talents will be on display, and that a big win in front of a large audience on ESPN will take my career to the next level. I would like to thank my manager Shane Shapiro for all his belief in me and Top Rank and ESPN for giving me this opportunity to properly introduce myself to the US audience,” said Cem Kilic

“Cem is doing very well. Everything is going good and we just waiting until next week. The fight being put off was a blessing. It gave us more time to do what we need to do to win this fight,” said McGirt.

“This is the life changing opportunity Cem, and I spoke about when he first agreed to move here from Germany 6 years ago. Next Saturday, on January 11th, all of the American audience watching will see Cem Kilic’s hard core aggressive style of boxing combined with Buddy McGirt’s teaching of textbook boxing! I want to thank Bob Arum and Brad Goodman for the opportunity and their committed dedication to bringing boxing back to network television. I can’t wait for Saturday night,” said Kilic’ manager Shane Shapiro of No Limit Mindset LLC.