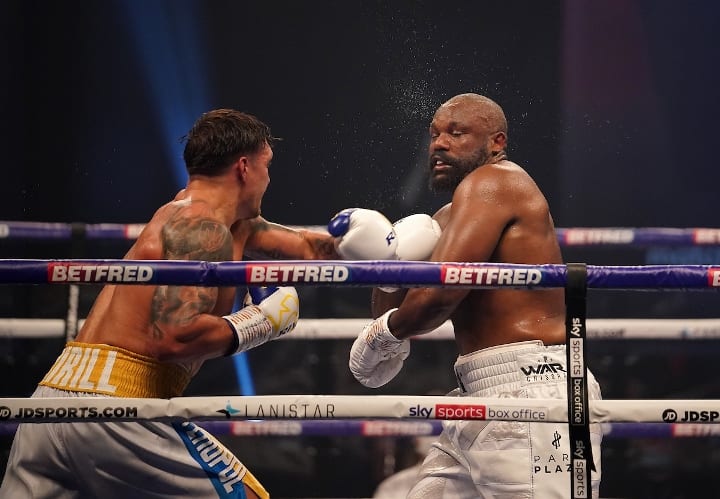 Joshua-Usyk Up Next? Don’t Expect It

After Anthony Joshua’s stoppage win over long waiting for mandatory challenger Kubrat Pulev, all eyes have begun to quest for the potential all British mega-fight between Tyson Fury. What separates it from being all of the belts is a little mandatory challenger in the name of Oleksandr Usyk.

President of the World Boxing Organization (WBO) Paco Valcárcel, Esq. tweeted after Joshua’s win Saturday night that he is leaving it up to Matchroom Boxing promoter Eddie Hearn on what to do next.

“@anthonyfjoshua looked sensational against @KubratPulev. As to the @WorldBoxingOrg belt, @EddieHearn
knows the meaning of commitment; the ball is in Hearn’s court,” Valcárcel tweeted and tagged serval in the boxing media that wasn’t yours truly afterward.

So for many waiting on the Joshua-Fury bout being for all the straps at heavyweight, it may not be possible for the fight to be agreed upon in principle last year.

Usyk is the current mandatory challenger for the belt that Joshua just retained Saturday and maybe the recipient of challenging for the belt but not against Joshua should he and more than likely vacate it or be stripped of it. This should come as a surprise to no one as these talks have been going on for a while, and Usyk has already expressed interest in not taking a step aside money or waiting.

The last time the WBO mandatory was challenged was back in 2017 when Joesph Parker defeated Hughie Fury when Parker still retained the belt. The was expected to happen, as well, as the WBO ordered Joshua last December to face Usyk after his win last year against Andy Ruiz. The pandemic delayed all of that and the IBF order for Pulev, which was just taken care of this past weekend.

So now we are here, and I don’t think this mandatory bout will get in the way of the proposed fight between Joshua and Fury, just without the WBO title on the line. Hearn himself hinted as much back in September to Boxing Social.

“There’s been a lot of talk about ‘give up the belt,’ but the aim for Anthony Joshua is to be the undisputed heavyweight champion. Will a belt get in the way of him fighting Tyson Fury next? Probably not. Will he vacate a belt and fight Tyson Fury next? Yes, I believe he would if he had to, but would he rather maintain all the belts? One million percent,” Hearn told Boxing Social back in September.

Rather and likey are two different streets, and neither one is going to cross in all likelihood. Should Joshua vacate the WBO portion, Usyk will challenge either Joseph Parker or Joe Joyce for that title at some point in 2021.