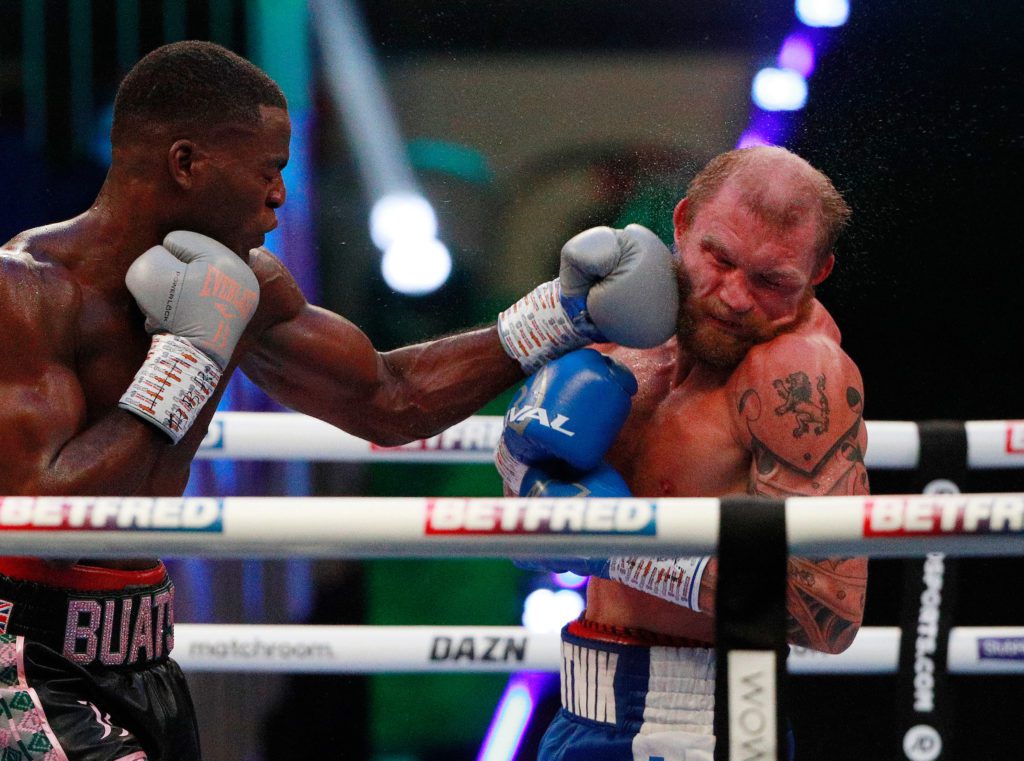 Joshua Buatsi was in the most significant test up to date. He made a statement, stopping Ricards Bolotniks in eleven rounds as he closes out the third and final week of “Fight Camp” from Matchroom Boxing Headquarters in Essex.

The time of the stoppage was 2:08 of the eleventh round as Buatsi punch by punch, stopped the MTK Golden Contract winner at light heavyweight.

Buatsi got the first round going controlling the pace, but the rugged Bolotniks were able to get thru with counter hooks. Buatsi varied his attack more in the second round, throwing body shots that showed a visual effect of discomfort from Bolotniks on the broadcast shown on the streaming platform DAZN.

As the fight grew on, Buatsi got into a groove and seemed to be finding a home for the left hook, which he threw more and more in the third round. After the first few rounds, Bolotniks was game but couldn’t deal with the aggression and was unable to throw his right, which he was trying to land.

ONE STEP CLOSER!@boxingbuatsi wipes Bolotniks out in the 11th to edge towards a shot at the World Title!

The fourth round started with both going toe to toe, but Buatsi was getting the better of the exchanges, forcing Bolotniks to backpedal. Cuts over both eyes of Bolotniks were apparent at this point of the fight, as well as the fact he looked to be fading from all the punishment. After another impressive fourth round for Buatsi, it seemed that the only thing missing was the stoppage. A lot more of this continued in the fifth round, but Bolotniks could still hang in and survive the round as well.

All of that changed as a well-timed left hook dropped Bolotniks in the sixth round. He got up and beat the referee’s ten counts, and from here, Buatsi looked to go for the kill. Bolotniks, with a minute left in the round, had to fend off the onslaught of Buatsi. It could make a solid case the ref just letting them fight could’ve stepped in, but he didn’t, and the fight marched on.

The only thing to note that happened in the seventh round was a warning to Buatsi for low blows and some confusion in Bolotniks as he thought he heard the bell but still had about 20 seconds to go. As the eight started, Buatsi kept feeding him hooks which Bolotniks took well, surprisingly. Buatsi got deducted a point in the eighth round for low blows, but the scorecards at this point would’ve been wide in favor of Buatsi despite this.

Buatsi after this systematic breakdown of Bolotniks ended the night with a right that put Bolotniks in the eleventh round to improve to 15-0.

With this win, we’ll see what is in store for Buatsi as he hinted at wanting to fight again as the year closed. Let’s see if Matchroom places him in with another tough challenge as well, but this was a good one from Buatsi.