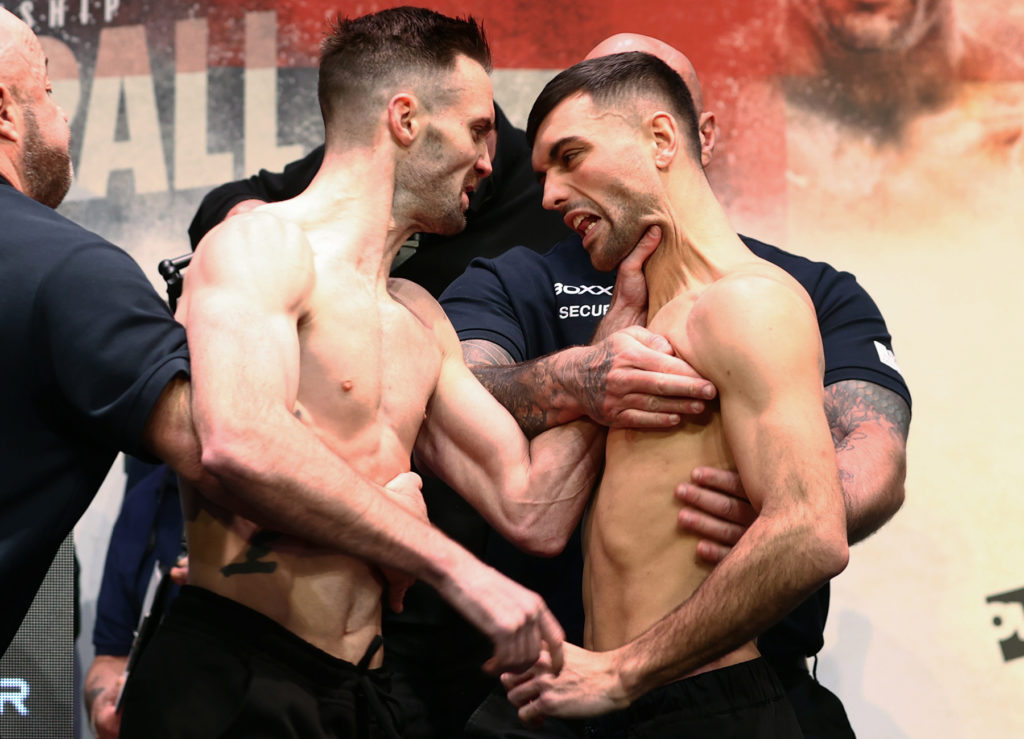 We are ready to go for the highly anticipated first Undisputed Jr. Welterweight title defense of Scotland’s Josh Taylor on Saturday night in Glasgow. This, as the champ and English challenger Jack Catterall both clocked in under the 135 lb. limit at Friday afternoon’s weigh-in.

The obligatory “stare down” also got interesting when the challenger put his left hand up on the champ’s throat (usually a “no-no”) and got his own throat grabbed and then, a shove in return from the WBA/WBC/IBF/WBO champ Taylor. Observe,

Saturday night’s defense is Josh Taylor’s first since defeating Jose Ramirez in Las Vegas back in May to become undisputed at Jr. Welterweight. Taylor, now 26-0, 13 KOs, has joined legendary Lightweight World Champion Ken Buchanan, as the other Scottish born boxer to hold an undisputed world title.

And, now, he’ll battle the 26-0, Chorley, England born Catterrall in the 14,000 seat OVO Hydro Arena in a bout that will be televised on PPV in the U.K. and back to the U.S. Saturday afternoon via Top Rank Boxing and ESPN+.

Hear us preview the Scottish showdown on the latest “Big Fight Weekend Podcast” with special guest, David Payne, aka “The Boxing Writer” from his site boxingwriter.co.uk,

Will Taylor look impressive and garner an even bigger fight later in 2022 and perhaps with World Welterweight Champion Terence Crawford? David seems to think that will be in play and Crawford is slated to be in attendance Saturday night.

For the record, Taylor weighed 140 lb. on the number and the challenger Catterall was 139 lb. And, this will be the fourth consecutive title fight for Taylor against an unbeaten opponent (for whatever that’s actually worth). And, you wonder if a rematch with former WBA 140 lb. world champ Regis Prograis of the U.S. could also be in the future in 2022.

First things first, it’s time to see if Taylor can handle all of the attention and pressure to deliver in front of the home country fans against the lightly regarded fellow Brit on Saturday.