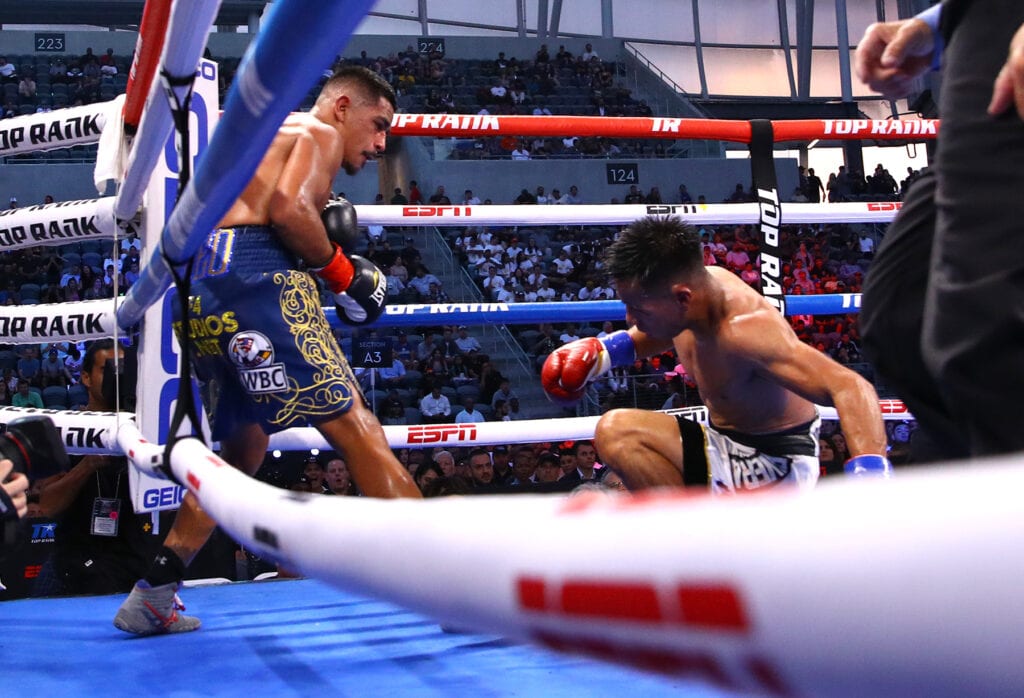 Former junior featherweight world champion Jessie Magdaleno is ready to take on the featherweight titans. In his second bout since moving up in weight, Magdaleno scored a ninth-round technical decision over a game Rafael Rivera after an elbow opened up a  nasty gash on the bridge of Magdaleno’s nose. This all happened Saturday night which saw Emanuel Navarrete retain his WBO title over Francisco De Vaca in the main event.

“These things happen. It’s part of the sport,” Magdaleno said after the fight. “I have a lot of respect for Rivera. He is a warrior. I felt very good. I felt strong. I would say better than ever. I want a world title. I’m ready.”

Super lightweight contender Arnold Barboza Jr. (22-0, 9 KOs) dished out a major punishment, smashing “Little Hulk” Ricky Sismundo, and Sismundo’s corner stopped the bout following the conclusion of the fourth round. Barboza after the contest is looking for a title opportunity next.

“I want a world title shot now,” Barboza said. “I want to challenge all the champions. It doesn’t matter who it is, or where it takes place. All I want is to face Ramirez, Prograis, or Taylor, and I want it now!”

STILL UNDEFEATED. 💪@jrBarbozaArnold gets the win after Ricky Sismundo throws in the towel!!#NavarreteDeVaca | @ESPN+ pic.twitter.com/206ixF1lkw

Welterweight contender Chris van Heerden (28-2-1, 12 KOs) continued his march up the rankings, overcoming a bad a cut and some major bleeding to boot to defeat Aslanbek Kozaev (33-3-1, 8 KOs) via eight-round unanimous decision (79-73 2x and 78-74). van Heerden has won five straight since a 2015 defeat to Errol Spence Jr.

“Listen, it was a tough, hard fight, but I got the victory. Hopefully, the cut doesn’t keep me out of action too long. I’m starting to get more active, and before long, I will be ready to fight any of the top welterweights,” van Heerden said.

Lightweight prospect Dmitry Yun improved to 2-0 with a six-round unanimous decision over veteran Javier Martinez (4-7, 3 KOs) by scores of 57-54 2x and 56-54. In what was a very sloppy fight, Yun was knocked down by Martinez twice but Martinez had point deductions in the third and fifth rounds for excessively losing his mouthpiece.

Super lightweight prospect Elvis Rodriguez (3-0-1, 3 KOs) made quick work of Jesus Gonzalez (6-3, 2 KOs), knocking him out at 1:42 of the opening round. The first knockdown Rodriguez put on Gonzalez was a treat to watch and will have a lot more eyes looking at him as he in the camp of legendary trainer Freddie Roach.